Once again another very busy year is drawing to a close. A good time to look back at all we have read over the past year and remember the novels we enjoyed the most. Many newspapers and magazines that review fiction ask selected guests to list their favourite books of the year. Reading these lists can lead to the discovery of new authors, or titles previously missed. We have included links to the most popular of these best book lists. We have also asked staff members to nominate their best reads of 2011; these cover most genres and include graphic novels. With so many recommendations you are certain to find some great reads to provide hours of entertainment over the holiday season.

The New York Times list the 10 best books of the year.

The Publisher’s Weekly has listed the best 100 books of 2011, from all genres, beginning with the top 10 fiction titles.

Now onto the staff recommendations…

On Canaan’s side : a novel / by Sebastian Barry.
“I would’ve given this the Man Booker Prize!, or at least put it on the shortlist (it was on the longlist). A beautifully written meditation on loss, grieving and exile with, the Guardian said “a seemingly endless series of potent and moving images”. (Pauline)

Caleb’s crossing : a novel / Geraldine Brooks.
“Caleb is Caleb Cheeshahteaumauk, the first Native American to graduate from Harvard in 1665. The title ‘Caleb’s Crossing’ refers to the ‘crossing’ that Caleb made from his traditional life as a member of the Wampanoag tribe who lived on the island of Martha’s Vineyard, to a life in the Puritan European world of C17th Cambridge, Massachusetts. The main character in the book is the narrator, Bethia Mayfield, daughter of a Minister living on the island, and Caleb’s life is revealed only as it intersects with Bethia’s. As a female in C17th America Bethia has almost more restrictions on her life than Caleb. This book is beautifully written and really interesting.” (Debbie)

The Sisters brothers / Patrick deWitt.
“I have just read this Man Booker shortlisted book and I loved it. I don’t think I can say exactly why, except that it completely drew me in and utterly charmed me. It’s Western set in 1850s California and it subtly reworks this genre, showing the human side of two hired killers. The writing is simple and comical; and the characters, despite their bad deeds and foibles, are very endearing”. (Kerry)

The marriage plot / Jeffrey Eugenides.
“After a 9-year wait, Eugenides’ third novel has finally landed on our shelves. After the haunting claustrophobia of The Virgin Suicides and the sprawling multi-generational epic Middlesex, The Marriage Plot is a relatively conventional narrative of a love triangle between three students, Madeleine, Leonard and Mitchell, but it explores relationships, mental illness, spirituality and social themes, and reaches into the characters’ pasts to paint an absorbing picture of intertwining life paths.” (Neil)

Black Jesus / Simone Felice.
“This novel is short and sweet – but it definitely packs an emotional punch. My heart went out to Lionel (nicknamed Black Jesus) a young marine who has returned home from war blind, and the young dancer Gloria, who stumbles into his life. Even though the circumstances are sad, the story is ultimately full of hope and I really enjoyed it.” (Theresa)

Freedom / by Jonathan Franzen.
“I very much enjoyed this tale of family, disfunction- it was oddly touching. Highly recommended.” (Rowan)

Mr Chartwell / Rebecca Hunt. “A dark comedy exploring the serious subject of depression, with great skill, and much humour. Fabulous characters, especially Black Pat, not a lodger anyone could want for long.” (Linda)

The life : a novel / Malcolm Knox. “I don’t care a jot about surfing but I loved this wacky Australian story about a has-been Australian surfer (58 years old and weighing 18 stone) called “DK” who lives with his “mother” Mo in a retirement home. The prose is as delicious as a pine lime Splice on a summer’s day, and don’t think it’s all about the next wave – this is just as much about relationships, secrets and lies – the quest for the truth keeps you turning the pages.” (Pauline) 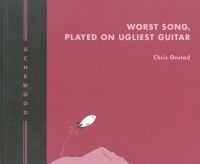 Worst song, played on ugliest guitar / Chris Onstad.
“My most favourite Graphic novel this year. This is Achewood volume 2, originated on the web, with un-detailed, simple artwork, but depth of characterization is achieved through great dialogue and storylines. It is brilliant and very funny.” (Linda)

The conductor / Sarah Quigley. “This story takes place in Leningrad between the spring of 1941 and the summer of 1942 and is based on a true historical event. In the autumn of 1942 the Nazis began the siege of Leningrad as they attempted to starve and bomb the city into submission and in the summer of 1942 Russian officials in Leningrad ordered that Shostakovich’s symphony would be played in an attempt to boost the morale of the citizens. As the pre-eminent Leningrad orchestra and conductor had been safely removed from the city, the task of playing this symphony fell to the second rate Radio Orchestra and their second rate conductor, Karl Eliasberg. Sarah Quigley has taken this historical event and woven a beautifully written story around it.” (Debbie)

Chasing fire / Nora Roberts.
“This was my first encounter with a Nora Roberts novel and I absolutely loved it – so gripping! I’m definitely going to read more. The main characters had a lot of depth and were really well developed. The story was fast paced – there was plenty of action the whole way through and lots of romance too.”(Theresa)

Reamde / Neal Stephenson. “Very few 1000 page novels could legitimately be termed ‘page turners’ but the new Neal Stephenson is just that. Melding multi-player online gaming, computer viruses, rogue Russian gangsters, duelling fantasy writers, determined Jihadists, plucky heroines, stalwart action heroes, intrepid hackers, multiple countries, and lots and lots of guns, Stephenson sets a breakneck pace that rarely lets up. It’s definitely firmly in the ‘thriller’ genre, but has an intellectual heft & enough interesting diversions to satisfy readers who like something a bit weightier. 1000+ pages may come off as an intimidating read, but it burns by in no time at all…” (Mark)

Like a sniper lining up his shot / adapted by Jacques Tardi ; from the novel by Jean-Patrick Manchette ; [edited and translated by Kim Thompson].
“Another tough noir chapter in the life of French hitman Martin Terrier by French comics genius, Jacques Tardi. Tardi is one of the genres great all-rounders, writing crazed fantasy adventures, intense war comics and his adapted hard-boiled crime capers are unforgettable. Consistent in tone, nasty and dark but the real feat of ‘Like a sniper…’ is that we care enough about this almost sociopathic murderer to continue reading. Somehow, Terrier the killer is venerable and the twists and turns of plot serve this point perfectly, right to the intense, violent end. If you enjoy this, read ‘West Coast Blues’ by Tardi as well.” (Monty)

The help / Kathryn Stockett.
“Everyone should read this fabulous, well written novel. It is an amazing account of how coloured maids were treated in Mississippi in the 1950’s and 1960’s.” (Sylvia)

Animal people / Charlotte Wood.
“24 hours in the life of a man trying to end his relationship with his girlfriend. Set in the stifling heat of Melbourne, with wonderfully observed, typical Australian characters. This is at times a very funny, but thought provoking novel, ending with a birthday party from hell, a terrific read.” (Linda)