Less than human : why we demean, enslave, and exterminate others / David Livingstone Smith.
“Smith interrogates why man alone, in Mark Twain’s words, can go “forth in cold blood and calm pulse to exterminate his kind.” Smith explores the ancient practice of labeling rival tribes; specific ethnic, racial, or religious groups; and species as undeserving of compassion. He is intent on untangling the mystery of dehumanization: it’s insufficient to merely demonize the criminals, he argues; we must understand why, say, the Nazis believed they had a “moral duty” to annihilate the Jews. (Mar.) (c) Copyright PWxyz, LLC. All rights reserved” (Publisher Weekly) (Syndetics)

New Zealand racism in the making : the life & times of Walter Mantell / Harry C. Evison.
“Politically, racism is a distraction. Scientifically, it is nonsense. There was no racism in New Zealand 200 years ago. But New Zealand now has an official Race Relations Commisioner to deal with racism. Where did this racism come from, and how did it get established? This book explains how it came about.” (Book jacket)

The new north : the world in 2050 / Laurence C. Smith.
Explores the ‘four locomotives’ that are changing the world – climate change, rising population, globalisation and resource depletion – and attempts to predict how they will shape the world between now and 2050. It is a book about people, and the ‘push’ and ‘pull’ factors that determine where and how they live. In particular, it examines the countries of the far north – Scandinavia, Canada, Greenland, etc. – which stand to gain from the changes underway. (Syndetics)

Streetlife : the untold history of Europe’s twentieth century / Leif Jerram.
“The twentieth century in Europe was an urban century: it was shaped by life in, and the view from, the street. Women were not liberated in legislatures, but liberated themselves in factories, homes, nightclubs, and shops. Lenin, Hitler, and Mussolini made themselves powerful by making cities ungovernable with riots rampaging through streets, bars occupied one-by-one. New forms of privacy and isolation were not simply a by-product of prosperity, but because people planned new ways of living, new forms of housing in suburbs and estates across the continent. Our proudest cultural achievements lie not in our galleries or state theatres, but in our suburban TV sets, the dance halls, pop music played in garages, and hip hop sung on our estates.” (Amazon.com) 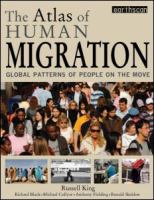 The atlas of human migration : global patterns of people on the move / Russell King … [et al.].
New currents of human migration, triggered by ethnic cleansing or climate change or economic need, are appearing all the time and immigration has become one of todays most contested issues. This compelling new atlas maps contemporary migration against its crucial economic, social, cultural and demographic contexts. (Syndetics)