This page is intended to be an introductory page to musicals at the library. The title-underlined links will take you directly to our catalogue. Some featured items are linked via a cover to enable you to read more about the items,see track information or listen to excerpts.

Catch me if you can : original Broadway cast recording.
Based on the motion picture adaptation of Frank W. Abagnale's autobiography who as a teenager runs away from home in search of the bright lights. He successfully poses as a pilot, an ER doctor, and a hotshot lawyer and is tracked by Agent Carl Hanratty, the determined FBI agent who's hot on Frank's trail. In the style of an 'old-fashioned glitzy' Broadway musical.

To find all musicals on DVD, try this Catalogue Quicksearch.

DVD : A Celebration of Classic MGM Film musicals, ....
Live from the Albert Hall, Clive Anderson introduces a concert which celebrates 75 years of classic MGM film musicals. Featuring John Wilson, his hand-picked orchestra, and a variety of vocalists, this film presents a performance of all the famous songs from these musicals, including The Wizard of Oz, Meet me in St Louis, Seven brides for seven brothers, High society, Gigi, and Singin' in the rain. Although all the original orchestral parts were lost, John Wilson has painstakingly reconstructed the original scores for this 2009 BBC Proms season concert.

To find all books about musicals, try this Catalogue Quicksearch.

100 film musicals / Jim Hillier & Douglas Pye.
Provides a stimulating overview of the genre's development, its major themes and the critical debates it has provoked. While centred on the dominant Hollywood tradition, 100 Film Musicals includes films from countries that often tried to emulate the Hollywood style, like Britain and Germany, as well as from very different cultures like India, Egypt and Japan. Jim Hillier and Douglas Pye also discuss post-1960s films from many different sources which adapt and reflect on the conventions of the genre, including recent examples such as Moulin Rouge! and High School Musical, demonstrating that the genre is still very much alive. (drawn from the publisher's description)

Look, I made a hat : collected lyrics (1981-2011) with attendant comments, amplifications, dogmas, harangues, digressions, anecdotes and miscellany / Stephen Sondheim.
"With this chronological continuation of Finishing the Hat, musical theater lyricist and composer Sondheim has produced another delightful book that melds lyrics, anecdotes, opinions, and whimsy. ... As in the previous volume, Sondheim includes descriptions about each show, as well as running commentary. Sondheim's general essays (the "harangues" and "dogmas" of the subtitle) show him at his opinionated and literate best. (Drawn from Library Journal, courtesy of Syndetics) 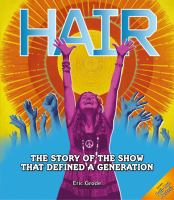 Hair : the story of the show that defined a generation / Eric Grode ; foreword by James Rado.
"More than 40 years ago, the first rock musical made off-Broadway history. No one had ever seen anything quite like Hair, which celebrated hippie values and earned its notoriety as much for its nudity as for its use of rock music and its controversial themes. It addressed topics (race, sexual liberation, youth culture) that were unheard of at the time. This illustrated authorized history chronicles the musical's beginnings from its off-Broadway roots in New York's East Village in 1967 to its successful 2009 Broadway revival. When it first appeared, it was condemned as vulgar and a death knell to Broadway. .... An entertaining social history and fascinating document of a seminal musical.." (Booklist review courtesy of Syndetics)

The Faber pocket guide to musicals / James Inverne.
Key features include: the hundred greatest musicals, snapshot plot summaries, ten terrible musicals; and, recommended recordings. James Inverne has been writing about musical theater for years and brings copious knowledge, passion for the subject and a sense of fun to a genre that continues to entertain us all. Also, a very handy quiz or trivia source book.

Rock the audition : how to prepare for and get cast in rock musicals / Sheri Sanders.
"Rock musicals are an increasingly dominant force in contemporary musical theater. Rock the Audition hones in on this growing area and defines what is required of the actor-singer to succeed in the audition room and on the stage. With an honest and thorough approach, Sanders gives performers the essential tools to find the best artist within themselves and to interpret rock material with optimum openness, sensitivity, creativity, and authenticity....Sanders also helps singing actors refine their physical life in the audition room when singing a rock song, an approach profoundly different from that of the traditional musical-theater methods. Including tips from industry insiders and a DVD with demonstrations of the various practices discussed in the text, Rock the Audition delivers lessons for the long term. For singing actors who want to unlock their artistic potential and get to the next level in their careers, this book is a must. Book jacket." (Syndetics summary)

When did the musical begin? One can go back further to the operettas of Strauss or Offenbach, but Arthur Sullivan and William Gilbert are synonymous with the popularisation of the early genre. There are many web-sites devoted to their music e.g. Gilbert and Sullivan Archive.

Other popular G & S musicals are The pirates of Penzance, or Ruddigore.

To find all musicals on CD, try this CD Catalogue Quicksearch.

To find all musicals on DVD, try this DVD Catalogue Quicksearch.

Bernstein on Broadway.
While not the most prolific of Broadway composers, Leonard Bernstein did much to cross musical boundaries, making the stage numbers familiar with songs such as "New York, New York and "I feel pretty". This CD features Kiri Te Kanawa and Jose Carreras.

Gerwshin overtures.
This features orchestrations heard in orginal stage productions of the 1920s and 1930s.

Hair : the tribal love rock musical.
Arguably this is now in "classic" status - it opened on Broadway in 1968. The lot is something like "War is bad, drugs are good, racism bites the big one, and nudity is nice." Although all these sentiments are expressed on this album which, like the show, has not dated well, the quality of the music makes it forgiveable. The songs weren't really rock, but they accomplished what all good pop songs set out to do - stick in the craw. (drawn from Amazon).

The road to El Dorado, with songs by Elton John.
Elton John's music has featured in many films and this is a typical example of his rock ballad style.

We will rock you, with Queen, and Ben Elton.
Since opening, it's been London's No.1 show. Recorded live at the Dominion Theatre, this album perfectly captures the electric atmosphere of this spectacular theatrical event. This is the story of the Bohemian Rebellion of 2302, the year of the Rhapsody. (Amazon)

(These links will jump you further down the page.)

Annie, composer Charles Strouse.
This is the 1982 soundtrack version. Tomorrow is one song that is in the repertoire of many school choirs since its release.

Annie get your gun,composer - Irving Berlin. (1950)
The story is "boy meets girl meets buckshot" variety but look no further for the source of There's no business like show business. Available also on CD.

Chess,by Benny Andersson and Tim Rice. (1996)
Chess is a musical that sounds like it shouldn't work but instead succeeds surprisingly well. This is the original concept album that was recorded before the musical was staged in London. Chess is the story of a love triangle told against the backdrop of an international chess tournament during the height of the cold war. (Amazon)

Fiddler on the roof.
The story is a universal one of hope, love and acceptance. The movie was nominated for 8 Academy awards, including Best Picture. Another crop of "classic" songs including "If I were a rich man" and "matchmaker". The library also has on DVD.

Godspell
A parallel work to Jesus Christ Superstar - both of the same late sixties/early seventies era. Godspell's portrayal of Jesus is the more light-hearted - as a hippie clown.

Grease.
This movie is a 1970s take on 1950s musicals, providing all the pop kitsch anyone could hope for. This has become the ultimate rock 'n' roll boy meets girl.

Kiss me Kate, by Cole Porter. (1948)
A musical version of The Taming of the Shrew. KISS ME KATE opened at the New Century Theatre on Broadway in 1949, making history in its run of over 1000 performances. The library also has on DVD.

Les Miserables, by Claude Schonberg. (1987)
After Les Miserables became a huge hit in London, it moved to Broadway, but regardless of its cast, it has been a hit musical across the world. Based on Victor Hugo's classic novel of a student uprising in pre-revolutionary France. The library also has on DVD.

Lady in the dark, by Kurt Weill.
Kurt Weill is representative of a group of composers who straddle classical and popular music forms. (Lyrics are by Ira Gershwin). This is the 1963 studio cast recording.

Oliver! by Lionel Bart.
After opening on the West End in 1960, Lionel Bart's Oliver! successfully transferred to Broadway. (the cover is to a different version)

The Rocky horror show, by Richard O'Brien.
In celebration of the 25th anniversary of Andrew Lloyd Webber's "The phantom of the opera", Cameron Mackintosh has produced a unique, spectacular staging of the musical on a scale which had never been seen before. Inspired by the original staging by Hal Prince and Gillian Lynne, this lavish, fully-staged production set in the sumptuous Victorian splendor of London's legendary Royal Albert Hall features a cast and orchestra of over 200, plus some very special guest-appearances. (the cover is to a different version).

Salad Days, by Julian Slade.
SALAD DAYS was one of the longest-running musicals in London in the 1950s. On a summer's day, a young couple meet an old man in the park who owns a magical piano that makes everyone dance. "The story of Salad Days has been described more times than I can remember as 'thin'...nevertheless it is a vehicle to wheel the songs along" (Julian Slade writing in the 40th anniversary CD version).

West side story.
Created by what lyricist Stephen Sondheim described as "a unique concatenation of people" (Leonard Bernstein, Sondheim, Arthur Laurents, Jerome Robbins), the show remains as explosively vibrant, daring, and modern as it was decades ago. Bernstein integrated Latin percussion and jazz into his electrifying score, dazzlingly translating New York's unique vitality into a musical idiom. (Amazon) The library also has on DVD.

Cats.
Since its debut in 1981, London's and the world's longest-running musical still runs in a dozen theatres worldwide. This show starred Elaine Paige who rose to stardom with the hit "Memories".

Other Lloyd Webber musicals to particularly note are Evita, and Jesus Christ Superstar.

The Phantom of the opera.
A musical mega hit whose fame has extended well beyond the music theatre.

Joseph and the amazing technicolor dreamcoat.
This DVD version stars former teen icon Donny Osmond, who played over 1,800 performances across North America. Its Lloyd Webber's first project with lyricist Tim Rice was originally written in 1968 as a school cantata. The Old Testament story remains a popular school concert choice. (The Library also has on CD.)

The sound of music.
This has now been immortalised by the screen version featuring Julie Andrews as the novice nun who became governess of the motherless von Trapp clan. Definitely cult status. The Library also has on CD.

The King and I.
The 1955 production of Rodgers and Hammerstein's Broadway hit The King and I, starring Yul Brynner as the King of Siam and Deborah Kerr as the governess sent to look after his children, was the most expensive film ever mounted by 20th Century Fox, and winner of 5 Academy awards.

Another work to note from the prolific Rodgers and Hammerstein partnership are
Oklahoma! (DVD).

Sweeney Todd: the demon barber of Fleet Street, based on the book by Hugh Wheeler.
For this most ghoulish of shows, Sondheim looked for inspiration in the way the music is used in horror and suspense movies. The winner of nine Tony Awards in 1979, Sweeney Todd may not be Sondheim's most accessible score, but its operatic complexity (it is almost entirely sung-through) makes it darkly spellbinding. (Amazon)