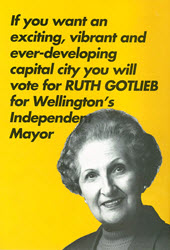 Ruth Gotlieb had a long and remarkable career within local government, serving a total of 27 years between the Wellington City Council, the Wellington Regional Council, the Wellington Harbour Board and the Capital & Coast District Health Board. She has also dedicated thousands of hours volunteering for Trade Aid, the Wellington Branch of the Cancer Society of New Zealand, the Newtown Community Centre, Eva's Attic, Ronald McDonald House and continues to serve as a Justice of the Peace. She was awarded the QSO for public service in 1995 and Wellingtonian of the Year in 2010.

In August 1995 funding was approved by the council for a new library to be built in Kilbirnie, and in February 1997 the new library was officially opened on its present site at 101 Kilbirnie Crescent. On 11 August 2000, the library at Kilbirnie became known as Ruth Gotlieb Library, to recognise Mrs Gotlieb's outstanding contribution to library services in Wellington.

These interviews were recorded in 2015 over three sessions. In these she describes her childhood in Ireland, her move to Australia as a teenager, her military service during WWII, and finally her move to New Zealand following her marriage to her late-husband Gerry Gotlieb. In the early 1980s she discovered a passion for local government which was to become a major part of her life for the next three decades. Ruth describes the philosophy she followed during her political career, the special characters she met along the way and some of the controversial issues she had to deal with as a Councillor and Board Member.