The teaser trailer just dropped for the BBC adaptation of His Dark Materials and it’s super exciting! It has an amazing cast. Just waiting to get a glance of the daemons and I’m a happy fan. There’s no release date yet, but in the meantime, we have some “materials” of our own to help with the hype…

There are all of the books in Philip Pullman’s award winning series: Northern Lights (published in the US as The Golden Compass), The Subtle Knife and The Amber Spyglass. We also have other books set in the same universe: Once upon a time in the North, Lyra’s Oxford, and the first part of his “Book of Dust” series, La Belle Sauvage.

We also have audiobook and graphic novel versions.

In Events, Happenings, News, Pencil it in your diaries, Stephen, Writing

Looking for a way to stave off those winter blues? Come and get your writerly juices flowing at Winter Writers, a new creative writing programme for teens starting up at Karori Library next week! Learn about everything from short fiction and poetry to scriptwriting and more at these fortnightly meet-ups during the winter months. Check the details below:

Where: Karori Library, 243 Karori Road, Karori
When: Every second Thursday, 4:00-5:00, from the 31st of May to the 26th of July
What: Creative writing workshops for teenagers, focussed on developing your command of language, ability to evaluate and critique your own writing, and — most importantly — create whole new worlds with a stroke of your pen.

Registrations are not required. If you’d like more information, call Karori Library on 476 8413, or talk to your local librarian. In Events, Happenings, Pencil it in your diaries, Stephen, Writing

Is there something you’ve always wanted to say, but you’re not quite sure how to say it? Or perhaps you know how to say it, but you’d like to learn how to say it better? Maybe you like how you say things, but you’re searching for ideas on what to talk about?

Well, you’re in luck. The wonderful Anna Mackenzie is coming to Wellington City Libraries to run two creative writing workshops for all you creative folks out there!

You can register either in person at the Libraries where the workshops are taking place, or by calling Karori Library on 476 8413, or Johnsonville Library on 477 6151. 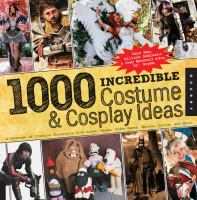 I love Halloween – in my opinion it’s the best holiday of the year. So every week in October I’ll be doing a round up of the best scary fiction, movies, crafts and other interesting bits and pieces. If I have time I might have a chat to the other librarians and get their recommendations as well.

If you’re like me, you want to get your costume and Halloween prep started early – we’ve got some great books on cosplay and other crafts!

Yaya Han is a big name in the cosplay world and she’s edited this great book of photos of amazing cosplayers – great inspiration for taking your halloween costume to the next level. 1000 incredible costume & cosplay ideas displays the best of the best. If you’re not quite at that level yet (like me) then pinterest is a great place to start. 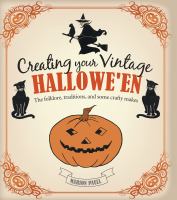 There are quite a few awesome Halloween crafting books – it was hard to pick just a few! Here are some of my favourites: Artful Halloween, Creating your vintage Halloween and Glitterville’s handmade Halloween. There’s also the AntiCraft, one of my favourite craft books ever.

Hopefully you’ll enjoy these round-ups. You’ll certainly be ready by the time the 31st of October rolls around…

In Adrienne, Events, Happenings, Internet, Pencil it in your diaries Got an idea for a website but don’t know how to develop it? Get along to these two free coding classes during the April school holidays. They’re perfect for beginners and a great way to learn how to code using CSS/HTML, and you’ll get a chance to create your own live website. BYOD.

Places are limited and bookings are required: bookings and info

Winging Your Way Through The Weekend, August 10-11

There’s no shortage of shindigs to get you out of the house and into the streets of Wellington this weekend. Here’s a quick run-down of what we’ve circled with our highlighter.

The New Zealand International Film Festival continues and included is the world premiere of Fantail. Rachel and Rebecca made some picks in last week’s Trailer Tuesday. Also in film this weekend is the fundraising screening of documentary Maidentrip about kiwi-born Laura Dekker’s solo adventure around the world aboard yacht Guppy. Proceeds to Wellington Ocean Sports.

One of Wellington’s best and formerly hidden treasure troves of Zines and art, Matchbox Studios has a grand opening at its new street front location.

The next round of New Zealand’s Got Talent auditions stop into the St James.

Museum of Wellington City & Sea continue with their L!VE Music sessions on Sunday.

Wellington’s gonna get a pop-up chocolate factory on Queens Wharf this weekend – YUM! If you need more convincing their website has a puppy picture.

The always thought-provoking World Press Photos exhibition is in town and hanging out on Willis Street.

If you haven’t had a chance to yet Young & Hungry is in its last weekend at Bats. It’s well worth the outing.

In new music for the playlist this week Indie band Typhoon, from Portland Oregon, have released a sneak peak of their new album White Lighter. They’re a bit of a well kept secret and it’s not really a sneak-peak it’s a peak in entirety. If you’re a fan of indie bands like the Fleet Foxes, Beirut, Boy & Bear, Edward Sharpe & The Magnetic Zeros, Band of Horses etc we reckon you’ll dig these guys.

Have a good one!

Winging Your Way Through The Weekend, July 27-28

Another weekend in Wellington is lurking just ahead of us. Here’s some heads-ups for ways to spend it.

Rūamoko has been a busy lad this week. If you’re keen on a sweet geology-heavy hangtime then you can checkout his antics here.

Soldout Splendour In The Grass has lured a whole bunch of epic bands down under this weekend but, and it’s a really big but, they’re all the way over in Australia’s New South Wales. If you want to get a sneak peak at some of the big acts (and there are plenty of them) you can do that right here at the “Best-Of-The-Fest” stream.

There’s no shortage of musical fairy dust in our own town this weekend though with acts like the Veils, Shapeshifter, The Phoenix Foundation playing 18+ shows (links to our CD collection included).

The Naked And Famous have dropped a new single from their upcoming second album In Rolling Waves.

The Naked And Famous – Hearts Like Ours by The Naked And Famous
The Wellington season of Young And Hungry, a festival showcasing young playwriting talent, kicks off at BATS Friday night with three sweet plays. More info here.
The (actual) New Zealand (full and proper, in its entirety) International Film Festival 2013 is finally upon us. Their website and full schedule is here. Looking forward, very much, to seeing The National’s (who’re playing over at Splendour In The Grass) film Mistaken For Strangers about life on the rock ‘n’ roll road.
Enjoy your first week back at school!

There’s a good chance you’re not going to get to get to experience them while they’re here if you’re under 18, so here’s a short film with the Veils playing some of their tunes for you.

Enjoy your first week back at school!

Winging Your Way Through The Weekend, July 20-21

How’re your holidays going? Great, we hope! Here’s this weeks run down of Wellington’s weekend fun times to help keep them lively.

Firstly though, did you know we’re having a sweet games fest at Wellington Central Library over the next few Wednesdays? We’ll supply the warmth and games, all you need to do is turn up!

Ever wondered what goes on behind the doors of the St James at the Royal New Zealand Ballet company? They’re having an open day this Saturday for all you keenly interested ballerdudes and ballerettes.

Want to spend the weekend watching baby pandas? Well you can! Thanks to Atlanta Zoo’s Lun Lun you can watch TWO baby pandas (twins). Woah!

There’s a swell looking, all ages, fundraising performance at Paramount Theatre of Echolalia. Here’s a brief description; “Inspired by the humour and directness of autistic children while working on a holiday program, McArthur’s delightful character Echo doesn’t register social niceties. A young woman on the spectrum preparing for a much needed job interview, Echo unwittingly puts our unspoken social rules under the spotlight…and finds a lot of them wanting.”

If none of that floats your boat, why not spend the weekend making a robot that can do flips like this one?

Winging Your Way Through The Weekend, June 13-14

Here’s a slice of what’s on in Welly-hood this weekend to kick your holidays off with some excitement and/or amazement.

The Company NZ are presenting Block Party up on the hill at Wellington High School – it’s a showcase extravaganza from this super talented dance school. Not to be confused with Bloc Party. Here’s a sweet video of the tutors busting some moves.

Oceania’s two most Hipster* cities Wellington and Melbourne clash in derby time on the water front. Bust out the Purple and orange.

Au Contraire, the New Zealand Science Fiction and Fantasy convention, is in town. It comes with cool stuff like a floating market.

Something a bit different and enriching for the ears? Gale Force Gospel are putting on a concert of African American Song.

In theatre The Legend Of Hector visits BATS. “Drawing from sources as diverse as the Arthurian Legends, an old friend’s travel blog, and toilet-wall graffiti, The Legend of Hector goes right to the heart of the moments we feel most epic, and the moments we desperately wish for greater adventures.” – That sounds awesome!

Looking for something to watch? Here’s a list compiled by Rachel & Rebecca to quell your winter blues.

In playlist news Jay-Z released new album Magna Carta… Holy Grail  this week – you can judge that one for yourself. His wife Beyonce announced a tour to our shores. Australian folksters Boy & Bear are gearing up to release new album Harlequin Dream in August and here’s a track off it to chill to – ‘Southern Sun’.

*Not an actual fact.