Upcoming nonfiction for a change

The YA nonfiction collection is not very large – ‘compact’ might be a good word – but we do stock it up with some good stuff. We’ve recently ordered some new history titles (World War II, precisely) and other interesting things.

Symphony for the City of the Dead: Dmitri Shostakovich and the Siege of Leningrad, M. T. Anderson.
This is not just for classical music enthusiasts – it looks like a gripping book for anybody interested in World War II, or basically just for anybody. Written by the prize-winning author of Feed, Thirsty, and The Astonishing Life of Octavian Nothing.
“In September 1941, Adolf Hitler’s Wehrmacht surrounded Leningrad in what was to become one of the longest and most destructive sieges in Western history—almost three years of bombardment and starvation that culminated in the harsh winter of 1943–1944. More than a million citizens perished. Survivors recall corpses littering the frozen streets, their relatives having neither the means nor the strength to bury them. Residents burned books, furniture, and floorboards to keep warm; they ate family pets and—eventually—one another to stay alive. Trapped between the Nazi invading force and the Soviet government itself was composer Dmitri Shostakovich, who would write a symphony that roused, rallied, eulogized, and commemorated his fellow citizens—the Leningrad Symphony, which came to occupy a surprising place of prominence in the eventual Allied victory.” (goodreads.com) 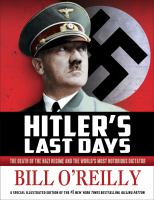 Hitler’s Last Days: the Death of the Nazi Regime and the World’s Most Notorious Dictator, Bill O’Reilly.
We note the American angle on this interesting subject!
“By early 1945, the destruction of the German Nazi State seems certain. The Allied forces, led by American generals George S. Patton and Dwight D. Eisenhower, are gaining control of Europe, leaving German leaders scrambling. Facing defeat, Adolf Hitler flees to a secret bunker with his new wife, Eva Braun, and his beloved dog, Blondi. It is there that all three would meet their end, thus ending the Third Reich and one of the darkest chapters of history. Hitler’s Last Days is a gripping account of the death of one of the most reviled villains of the 20th century—a man whose regime of murder and terror haunts the world even today. Adapted from Bill O’Reilly’s historical thriller Killing Patton, this book will have young readers—and grown-ups too—hooked on history.” (goodreads.com)

Have you seen the latest Star Wars footage?