Graphic Novels with some Pulp

Nicola’s done it again! Here’s the next installment in her guides to the graphic novels:

Pulp was a word originally used to describe “the periodicals of the 1880s to the 1950s made from the cheapest pulpwood paper, the word came to have an expanded meaning; a dependence on formula and genre…literature concerned with sensation and escape.” (From The Encyclopedia of pulp fiction writers) Here, I’m using it to describe graphic novels that fall into ‘pulp’ genres: Western, crime, adventure, science fiction, and fantasy. So how are these books different from other graphic novels dealing with the same subjects? I’d say that ‘new pulp’ has a certain feel to it; they mostly focus on action and adventure rather than character development. That’s not a criticism: sometimes you just want to see a cowgirl shoot a zombie in the face. They are fantastic escapist reading. Although a reoccurring concept that pulp novels made popular was the “hardboiled” genre: a tough, cynical and realistic story set in a certain genre like western or noir.

One could argue that the Marvel/DC comics are ‘pulp’ but I think that, true to the original spirit of pulp comics, the graphic novels that I’ve described as ‘pulp’ come from smaller, more marginal publishers as the originals did. 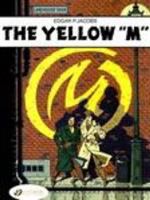 Blake and Mortimer are two British secret agents who fight against all sorts of nefarious international organizations. It started out in the Tintin Magazine, which explains the similar feel. In fact, Blake & Mortimer works as a rather more ‘grown up’ version of Tintin, although its plots sometimes have that rather ridiculous feel. The plot of the first volume, The Yellow M, involves the theft of the crown jewels. There aren’t any female characters apart from the obligatory stalwart housekeeper, although this is because the censorship laws were very strict! That being said, this series is a great, retro, escapist glimpse into very English world where men with great moustaches and drink tea while pondering their next move against the dastardly forces. Hilariously, though, the writer was actually Belgian.

The Rainbow Orchid: The Adventures of Julius Chancer, Garen Ewing

The Rainbow Orchid is an updated take on the adventure comics like Tintin and Blake & Mortimer. It keeps to the spirit of the originals, but without the sexism and racism that often marred a modern reader’s enjoyment of the original series. Again the drawing style is very familiar; it’s known as ‘ligne clarie’ (French for Clear line). There’s a certain uniformity to the way characters are drawn and shadow isn’t represented at all. It’s a very ‘cartoon’ style but it certainly works in this context! The story follows Julius Chancer, a historical researcher following the trail of the titular orchid, which takes him all over the world and into the path of some very dangerous people. It’s entertaining and fun.

For something a littler grittier, take a look at the series The Sixth Gun. This is an action packed Western with zombies and black magic and pretty awesome female lead. Becky lives quietly with her stepfather until a group of thugs come to collect something he’s been hiding; the sixth gun, a magical weapon that is reputed to have been one of six guns forged by the Devil himself. Finding herself pursued by otherworldly forces, Becky has no choice but ally herself to Drake Sinclair, a man who wants the guns for his own purposes…

Also a Western, but this one has a very different feel. Chester Kates is a teenager living on the fringe of society in the West. He takes a job to burn a deserted town to make way for the railroad, but it turns out to be not so deserted… Bloody Chester is as much about human frailty and greed, and shares a bleak cynicism with the works of Raymond Chandler, one of the greatest pulp writers of all time (and a writer that you should definitely look up if you enjoy this graphic novel). If I had to describe it, I would say it’s a “hardboiled Western.”

Recently ordered by us