I am a massive Audrey Hepburn fan and we have a lovely new book that I am quuuiiiite excited about: 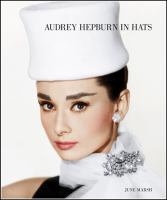 Audrey Hepburn in hats / June Marsh.
“Audrey Hepburn’s legendary style and grace redefined perceived notions of Hollywood glamour and ushered in an age of sophistication and elegance. Her legacy on screen and in fashion is undisputed and her image has become as synonymous with her fame as her films. This book celebrates Audrey Hepburn wearing a selection of her most beautiful, stylish and outrageous hats – from legendary designs such as Givenchy, Mr. John, Dior, Cecil Beaton and Balenciaga. This exquisite volume features stunning photography and accompanying text from renowned fashion writer, June Marsh.” – amazon.com

Gotta love a title that tells you exactly what to expect!! I also have my eye on this one:

What would Audrey do? : timeless lessons for living with grace and style / Pamela Keogh.
“Though on-camera she was often cast in the role of a carefree ingénue, Audrey Hepburn’s off-camera life was marked by challenges: growing up without a father and with the Nazi threat during her youth; a demanding film career while she was a young mother; unfaithful husbands and two divorces; and constant scrutiny from the media. Yet Audrey Hepburn always epitomized beauty and grace. In the tradition of What Would Jackie Do? bestselling author Pamela Keogh culls lessons in loveliness from a woman who survived every setback with panache.” – goodreads.com

So ya’ll know what I’ll be reading this weekend!

For some sweet, up-beat and gorgeously old-school charm, I recommend you watch a couple of her movies. If you haven’t yet been drawn in by Audrey’s irresistable manner yet, you soon will be!

Breakfast at Tiffany’s [videorecording] / Paramount Pictures ; a Jurow-Shepherd production ; directed by Blake Edwards ; produced by Martin Jurow and Richard Shepherd ; screenplay by George Axelrod.
An eccentric New York City playgirl is determined to marry a Brazilian millionaire, but her next-door neighbour, a writer, changes her plans.

Funny face [videorecording] / [presented] by Paramount Pictures.
A Cinderella story about an inconspicuous salesgirl who is whisked off to Paris by a group of fashion magazine sophisticates and transformed into a dazzling model with whom the magazine’s photographer falls in love.