If you’re looking for some epic comic books here’s a bunch we love!

“Meet Amelia Louise McBride. She’s nine years old, a former New Yorker who’s now living in a small town after her parents decided to get divorced, and dealing with everything from being the new kid in school to getting her first kiss. But you know what? She’s got her mom and her aunt Tanner (who happens to be an ex-rock star) and her friends Reggie, Rhonda, and Pajamaman, and everything’s going to be okay. Except, of course, when it isn’t. In this first book of Amelia’s adventures, Amelia and her friends take on bullies (and Santa!), barely survive gym class, and receive a disgustingly detailed explanation of the infamous Sneeze Barf.” Goodreads

“Move over, Mr Fantastic–Marvel’s First Family has a brand-new star! Frankin Richards finally hits the big time with this collection of all four of his critically acclaimed one-shots! Join Franklin and his robot pal H.E.R.B.I.E. as they head into Reed’s lab for all kinds of fantastic fun, amazing adventures and more trouble than you can shake an Ultimate Nullifier at!  …. COLLECTIONS: Son of A Genius, Everybody Loves Franklin, Super Summer Spectacular, Happy Franksgiving, March Madness, World Be Warned, Monster Mash, Fall Football Fiasco!” Goodreads.

The Secret Science Alliance and the Copycat Crook by Eleanor Davis

“Super-smart Julian Calendar thinks starting junior high at a new school will mean he can shed his nerdy image–but then he meets Ben and Greta, two secret scientists like himself! The three form a secret club, complete with a high-tech lair. There, they can work to their hearts content on projects like the Stink-O-Meter, the Kablovsky Copter, and the Nightsneak Goggles.

All that tinkering comes in handy when the trio discovers an evil scientist’s dastardly plan to rob a museum. Can three inventors, armed with their wacky creations, hope to defeat this criminal mastermind?” Goodreads.

Bone. Volume one, Out of Boneville by Jeff Smith

“After being run out of Boneville, the three Bone cousins, Fone Bone, Phoney Bone, and Smiley Bone, are separated and lost in a vast uncharted desert. One by one, they find their way into a deep, forested valley filled with wonderful and terrifying creatures… Humor, mystery, and adventure are spun together in this action-packed, side-splitting saga. Everyone who has ever left home for the first time only to find that the world outside is strange and overwhelming will love Bone.” Goodreads.

The Wonderful Wizard of Oz by Eric Shanower

“When Kansas farm girl Dorothy flies away to the magical Land of Oz, she fatally flattens a wicked witch, liberates a living scarecrow and is hailed by the Munchkin people as a great sorceress but all she really wants to know is: how does she get home?” Goodreads.

Ottoline and the Yellow Cat by Chris Riddell

“Meet Ottoline Brown and her best friend, Mr. Munroe. No puzzle is ever too tricky for the two of them to solve.” Goodreads. 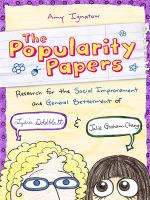 The popularity papers: research for the social improvement and general betterment of Lydia Goldblatt & Julie Graham-Chang by Amy Ignatow

“Lydia Goldblatt and Julie Graham-Chang are best friends with one goal: to crack the code of popularity. Lydia’s the bold one: aspiring theatre star, stick-fighting enthusiast, human guinea pig. Julie’s the shy one: observer and artist, accidental field hockey star, faithful recorder. In this notebook they write down their observations and carry out experiments to try to determine what makes the popular girls tick. But somehow, when Lydia and Julie try to imitate the popular girls, their efforts don’t translate into instant popularity. Lydia ends up with a bald spot, their parents won’t stop yelling, and Julie finds herself the number-one crush of Roland Asbjørnsen. Worse, they seem to be drifting farther and farther from their goal—and each other.” Goodreads

The Invention of Hugo Cabret: a novel of words and pictures by Brian Sleznick

“When twelve-year-old Hugo, an orphan living and repairing clocks within the walls of a Paris train station in 1931, meets a mysterious toyseller and his goddaughter, his undercover life and his biggest secret are jeopardized.” Easyfind.