Librarian and artist Alistair Fraser had his final two week stay at Mason Bay, Rakiura/Stewart Island on a DOC/CNZ Wild Creations Artist Residency in December. You can read his previous posts about his stay on this blog, or visit his Taonga Puoro blog where he’s been documenting the instruments he’s created as part of this residency.

The tumutumu is a percussion instrument that has kōrero linking it to the southern parts of New Zealand. It is typically a found instrument.

This tumutumu kōiwi upokohue is a pilot whale’s lower jaw bone with a rata striker that was also found on the beach at Mason Bay. It has a variety of voices and tones depending on what part of the instrument is played. The density striker material also influences the tone.

Thanks to Kaitiaki Roopu o Murihiku for kindly giving me the permission to hold this taoka.

More of the instruments I have made on my DOC/CNZ Wild Creations residency can be viewed here: http://taongapuoro.blogspot.com/

Ive just returned from my final two weeks staying at Mason Bay, Rakiura/Stewart Island on a DOC/CNZ Wild Creations Artist Residency. I will be posting some photos of the instruments I made in this time.

This putorino is made from tutu rakau and has kanohi (faces) based on an artifact pendant that was found on Rarotoka (Centre Island) Foveaux Strait. It plays well!

This was my second trip to Mason Bay as part of 2011 DOC/CNZ Wild Creations Artists Residency. This time I concentrated on making. Here are some examples of what I made.

For this karanga manu I used the tuwiri drill to fashion the cup and for the relief carving I used metal scrapers and some nails I found in the workshop. The original is in Otago Museum and is rather famous.

The porutu is a longer open end cross blown instrument and is very much an instrument used in Murihiku. Here are two made from tutu and one from albatross wing bone.

The putorino is mentioned in Traditional Lifeways of the Southern Maori J.H. Beattie by his informants. Here is one made from tutu rakau in a northern style.

Tokere are played by putting the pikao loops go over the fingers and playing in a similar way to castenets. These shells are from the mouth of Martin Creek and the pikao is from Big Sandhill behind Hill Homestead

Here is a link to my taonga puoro blog  with extra content.

I was playing porutu to a tui when half a dozen bellbirds turned up and had a sing along. Listen here 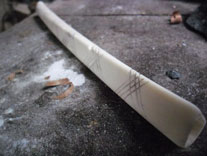 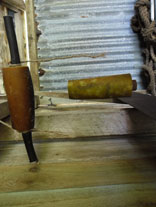