This month’s history ‘picks’ get stuck in and dig up Britain, with Mike Pitts’s book examining ten of the most recent exciting discoveries in British archaeology over the past decade. Turning from the ground to the stars, SpaceX mission manager Andrew Rader’s Beyond the Stars covers a history of exploration on Earth so far and looks at the future of the field as it expands into space. Finally, we have Kathy Lee Peiss’s Information Hunters, detailing the exploits of a group of (dashing, good looking, heroic) librarians and archivists who traveled from America to Europe during World War 2 in order to save and preserve records, books and valuable intelligence from the ravages of war.

Digging up Britain : ten discoveries, a million years of history / Pitts, Michael W
“Digging Up Britain traces the history of Britain through key discoveries and excavations. This book covers the most exciting excavations of the past ten years, gathers firsthand stories from the people who dug up the remains, and follows the latest revelations as one twist leads to another. These discoveries illuminate Britain’s ever-shifting history that we now know includes an increasingly diverse array of cultures and customs.” (adapted from Catalogue)

Rifleman / Gregg, Victor
“Born in 1919, Victor Gregg enlisted in the Rifle Brigade aged just eighteen and began a life of adventure. Taken into captivity at the Battle of Arnhem in 1944, he was sentenced to death for sabotaging a Dresden factory. Revised and expanded with exclusive new material in time for Gregg’s 100th birthday, Rifleman is the extraordinary story of an independent-minded and quick-witted survivor.” (adapted from Catalogue)

The Seine : the river that made Paris / Sciolino, Elaine
“In the spring of 1978, as a young journalist in Paris, was seduced by a river. In The Seine, Elaine tells the story of that river through its rich history and lively characters. She patrols with river police, rows with a restorer of antique boats, discovers a champagne vineyard, and even dares to swim in the Seine. Sciolino’s keen eye and vivid prose bring the river to life as she discovers its origins on a remote plateau in Burgundy, where a pagan goddess healed pilgrims at an ancient temple.” (adapted from Catalogue)

Beyond the known : how exploration created the modern world and will take us to the stars / Rader, Andrew
“For the first time in history, the human species has the technology to destroy itself. But having developed that power, humans are also able to leave Earth and voyage into the vastness of space. After millions of years of evolution, we’ve arrived at the point where we can settle other worlds and begin the process of becoming multi-planetary. How did we get here? What does the future hold for us? Told with an infectious zeal for traveling beyond the known, Beyond the Known illuminates how very human it is to emerge from the cave and walk toward an infinitely expanding horizon.” (adapted from Catalogue)

The hermit king : the dangerous game of Kim Jong Un / Lee, Chung Min
“In The Hermit King, Asian geopolitical expert Chung Min Lee tells the story of the rise of the Kim Dynasty and its atrocities, motivations, and diplomatic goals. He also discusses the possible outcomes of its aggressive standoff with the world superpowers. Kim Jong Un is not a crazed “Rocket Man” or a bumbling despot; he has been groomed since birth to take control of his country and stay in power at all costs.” (Catalogue) 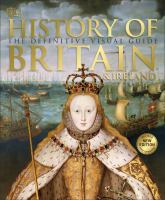 History of Britain & Ireland : the definitive visual guide.
“Combining over 700 photographs, maps, and artworks with accessible text, the History of Britain and Ireland is an invaluable resource for families, students, and anyone seeking to learn more about the fascinating story of the England, Scotland, Wales and Ireland. Spanning six distinct periods of British and Irish history, this book is the best way to find out how Britain transformed with the Norman rule, fought two world wars in the 20th century, and finally came to terms with a new status in a fast-changing economy” (adapted from Catalogue)

Information hunters : when librarians, soldiers, and spies banded together in World War II Europe / Peiss, Kathy Lee
“During and immediately after World War II, an unlikely band of civilians were dispatched to Europe to collect books and documents, to acquire and preserve the written word as well as provide critical information for intelligence purposes. While armies have seized enemy records and rare texts as booty throughout history, it was only during World War II that librarians, archivists, and scholars traveled abroad to collect books and documents to aid the military cause. Galvanized by the events of war into acquiring and preserving the written word, as well as providing critical information for intelligence purposes, these American civilians set off on missions to gather foreign publications and information across Europe.” (adapted from Catalogue)

A small door set in concrete : one woman’s story of challenging borders in Israel/Palestine / Hammerman, Ilana
“A Small Door Set in Concrete is a moving picture of lives filled with destruction and frustration but also infusions of joy. Whether joining Palestinian laborers lining up behind checkpoints hours before the crack of dawn in the hope of crossing into Israel for a day’s work, accompanying a family to military court for their loved one’s hearing, or smuggling Palestinian children across borders for a day at the beach, Hammerman fearlessly ventures into territories where few Israelis dare set foot and challenges her readers not to avert their eyes in the face of injustice.” (adapted from Catalogue)