Our first book is an autobiography by a top young New Zealand rally driver. Our pick for this month also include Really? a collection of Jeremy Clarkson’s motoring journalism; The World’s Great Rail Journeys; Autopia is the essential guide to the future of our greatest invention, the car; and Supercars which is a celebration of the Supercar in all its glory. Enjoy!

Driven / Paddon, Hayden
“Hayden Paddon was just a boy growing up in Geraldine – in love with driving and dreaming big. Starting with nothing, and determined to beat the odds, he set out on a phenomenal 20-year pathway to the World Rally Championship, where he footed it with the best rally drivers on the planet. But it didn’t come easy. In Driven, Paddon details the many highs and lows along his road to the top. Driven is a mile-a-minute autobiography that celebrates self-belief, hard work and turning dreams into reality.” (adapted from Catalogue)

Really? / Clarkson, Jeremy
“From his first job as a travelling sales rep selling Paddington Bears to his latest incarnation as gentleman farmer, Jeremy Clarkson’s love of cars has seen him through some deeply trying times. And in a world so persistently infuriating there’s sometimes nothing for it but to throw up your hands and ride full-throttle over the speed-bumps. Fuelled by hi-octane enthusiasm and irrepressible curiosity, he’s put his foot down again.” (adapted from Catalogue)

The world’s great rail journeys : 50 of the most spectacular, luxurious, unusual and exhilarating routes across the globe / Solomon, Brian
“A portrait in words and photographs of over 50 of the world’s most exciting, unusual and exotic railway journeys, including North America, Europe, Africa, Asia and Australasia. The World’s Great Rail Journeys is perfect for all railway enthusiasts, whether actual or armchair travellers.” (adapted from Catalogue)

Autopia : the future of cars / Bentley, Jon
“Cars are one of the most significant human creations. They changed our cities. They changed our lives. They changed everything. But in the next thirty years, this technology will itself change enormously. If Google get their way, are we all going to be ferried around in tiny electric bubble-cars? Or will we watch robots race a bionic Lewis Hamilton? And what about the future of classic cars? Fully designed with illustrations and photographs, this will be the perfect Christmas gift for car and technology enthusiasts everywhere.” (adapted from Catalogue) 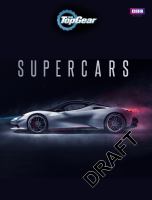 Supercars
“Supercars are the purest and most extreme expression of automotive performance there is – and no one knows their supercars more than the Top Gear Magazine team. From the stylish curves and cutting-edge technology to the absurd power and baffling price-tags, this book is a celebration of the Supercar in all its glory. With all new selections including electric supercars, the stunning full-colour photography and hair-raising visuals will take you under the hood of the fastest, and most ridiculous cars on the planet. This is Top Gear Ultimate Supercars. Buckle up. Are you ready?” (adapted from Catalogue)