This month’s history picks feature only ONE book about the United States, to make up for last month. We’re going everywhere else, to Chinese and Cuban revolutions in Making China Modern and Cuba Libre!, Viking-era England in Dragon Lords: The History and Legends of Viking England, South Sudan in A Rope From The Sky, and finally we have Afghanistan: A History from 1260 to the Present.

Chicago : From Vision to Metropolis
“Chicago has been called the “most American of cities” and the “great American city.” Not the biggest or the most powerful, nor the richest, prettiest, or best, but the most American. How did it become that? And what does it even mean? At its heart, Chicago is America’s great hub. Chicago magazine editor Whet Moser draws on Chicago’s social, urban, cultural, and often scandalous history to reveal how the city of stinky onions grew into the great American metropolis it is today. An affectionate, beautifully illustrated urban portrait, his book takes us from the very beginnings of Chicago as an idea to the global city it has become.” (Abridged from Syndetics summary)

Making China modern : from the Great Qing to Xi Jinping / Klaus Muhlhahn.
“A panoramic survey of China’s rise and resilience through war and rebellion, disease and famine, that rewrites China’s history for a new generation. It is tempting to attribute China’s recent ascendance to changes in political leadership and economic policy. Making China Modern teaches otherwise. Moving beyond the standard framework of Cold War competition and national resurgence, Klaus Mühlhahn situates twenty-first-century China in the nation’s long history of creative adaptation.” (Abridged from Syndetics summary)

Cuba libre! : Che, Fidel, and the improbable revolution that changed world history / Tony Perrottet.
“In this wildly entertaining and meticulously researched account, Tony Perrottet unravels the human drama behind history’s most improbable revolution: a scruffy handful of self-taught revolutionaries – many of them kids just out of college, literature majors, art students and young lawyers, and including a number of women – defeated 40,000 professional soldiers to overthrow the dictatorship of Fulgencio Batista. Cuba Libre is an entertaining look back at a liberation movement that captured the imagination of the world with its spectacular drama – and that set the stage for a build-up of Cold War tension that became a pivotal moment in history.” (Syndetics summary)

Dragon Lords : The History and Legends of Viking England
“Why did the Vikings sail to England? Were they indiscriminate raiders, motivated solely by bloodlust and plunder? One narrative, the stereotypical one, might have it so. But locked away in the buried history of the British Isles are other, far richer and more nuanced, stories; and these hidden tales paint a picture very different from the ferocious pillagers of popular repute. Eleanor Parker here unlocks secrets that point to more complex motivations within the marauding army that in the late ninth century voyaged to the shores of eastern England in its sleek, dragon-prowed longships.” (Abridged from Syndetics summary)

Afghanistan : A History from 1260 to the Present
“Located at the intersection of Asia and the Middle East, Afghanistan has been strategically important for thousands of years. Its ancient routes and strategic position between India, Inner Asia, China, Persia, and beyond has meant the region has been subject to frequent invasions, both peaceful and military. In this magisterial illustrated history, Jonathan L. Lee tells the story of how a small tribal confederacy in a politically and culturally significant but volatile region became a modern nation state.” (Abridged from Syndetics summary)

Code Name: Lise : the true story of World War II’s most highly decorated woman / Larry Loftis.
“The year is 1942, and World War II is in full swing. Odette Sansom decides to follow in her war hero father’s footsteps by becoming an SOE agent to aid Britain and her beloved homeland, France. Five failed attempts and one plane crash later, she finally lands in occupied France to begin her mission. It is here that she meets her commanding officer Captain Peter Churchill. In Code Name: Lise, Larry Loftis paints a portrait of true courage, patriotism, and love – of two incredibly heroic people who endured unimaginable horrors and degradations. ” (Abridged from Syndetics summary)

A Rope from the Sky : The Making and Unmaking of the World’s Newest State
“South Sudan’s historic independence was celebrated around the world–a triumph for global justice and an end to one of the world’s most devastating wars. But the party would not last long; South Sudan’s freedom fighters soon plunged their new nation into chaos, shattering the promise of liberation and exposing the hubris of their foreign backers. Chronicling extraordinary stories of hope, identity, and survival, A Rope from the Sky journeys inside an epic tale of paradise won and then lost.” (Abridged from Syndetics summary) 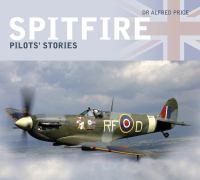 Spitfire: Pilots’ Stories
“The Spitfire was perhaps the most successful fighter design of all time. It remained at the forefront of its genre from the biplane era until well into the jet age, a period including the Second World War, which saw a faster rate of technological advance than in any comparable period in history. Yet the Spitfire was more than just a superb flying machine. During the war it carved a unique place in the psyche of the British people, and many believe it played a major part in saving the nation from defeat during the grim days of 1940.” (Abridged from Syndetics summary)