Our most popular books for non-fiction is full of diversity. It goes from an analysis on truth and facts on “A Matter of Fact: talking truth in a post-truth world”, passing through the fun and scientific “Breakfast with Einstein: the exotic physics of everyday objects” to the quite interesting “Chromatopia: an illustrated history of colour”.

A matter of fact : talking truth in a post-truth world / Berentson-Shaw, Jess
“…in the time of fake news and post-truth politics, it seems that conspiracy and rumour spread faster than ever and are even harder to debunk. Battling over facts can be exhausting and polarising. For those committed to distinguishing misinformation from good information how do we convincingly explain the difference? Jess Berentson-Shaw tackles these questions head-on. In A Matter of Fact she explores the science of communicating and presents innovative ways to talk effectively (and empathetically) about contentious information…” (adapted from Catalogue)

How to invent everything : a survival guide for the stranded time traveler / North, Ryan
“…This guide contains all the science, engineering, mathematics, art, music, philosophy, facts, and figures required for even the most clueless time traveler to build a civilization from the ground up. Your new world will be one in which humanity matured quickly and efficiently, instead of doing what we did… And, on the off chance you don’t one day find yourself stranded in time, this fascinating guide to the ideas and technologies that made us who we are today will at least allow you to make some really interesting cocktail-party small talk with a complete stranger.” (adapted from Catalogue)

Confessions of a rogue nuclear regulator / Jaczko, Gregory B.
“As former chair of the U.S. Nuclear Regulatory Commission (NRC), physicist Jaczko found the NRC dominated by the industry it was supposed to regulate and spoke out-particularly with the refusal to make the changes that would prevent another catastrophe like Fukushima… Never before has the chairman of the world’s foremost nuclear regulatory agency challenged the nuclear industry to expose how these companies put us at risk. Because if we (and they) don’t act now, there will be another Fukushima. Only this time, it could happen here.” (adapted from Catalogue)

Breakfast with Einstein : the exotic physics of everyday objects / Orzel, Chad
“Just beneath the surface of our ordinary lives, strange phenomena lurk. Exciting physics doesn’t only show up in the Big Bang, or a black hole, or in the guts of giant particle accelerators like the Large Hadron Collider it ‘s all around us… In Breakfast with Einstein, the ordinary becomes extraordinary, everything is possible and the day’s end will find us dazzled.” (Catalogue)

Bolder : making the most of our longer lives / Honoré, Carl
“…Carl Honoré captured the zeitgeist with his international sensation, In Praise of Slow. In Bolder, he introduces us to another rising movement: a revolution in our approach to ageing….Having travelled the globe to meet the pioneers who are redefining ageing, Carl Honoré explores the cultural, medical and technological trends that will help us make the most of our longer lives. ” (adapted from Catalogue)

Primate change : how the world we made is remaking us / Cregan-Reid, Vybarr
“…PRIMATE CHANGE is a wide-ranging, polemical look at how and why the human body has changed since humankind first got up on two feet. Spanning the entirety of human history – from primate to transhuman – Vybarr Cregan-Reid’s book investigates where we came from, who we are today and how modern technology will change us beyond recognition.” adapted from (Catalogue)

Turned on : science, sex and robots / Devlin, Kate
“The idea of the seductive sex robot is the stuff of myth, legend and science fiction. From the ancient Greeks to twenty-first century movies, robots in human form have captured our imagination, our hopes and our fears. But beyond the fantasies there are real and fundamental questions about our relationship with technology as it moves into the realm of robotics… ” (adapted from Catalogue)

Not all dead white men : classics and misogyny in the digital age / Zuckerberg, Donna
“Some of the most controversial and consequential debates about the legacy of the ancients are raging not in universities but online, where alt-right men’s groups deploy ancient sources to justify misogyny and a return of antifeminist masculinity. Donna Zuckerberg dives deep to take a look at this unexpected reanimation of the Classical tradition…” (adapted from Catalogue) 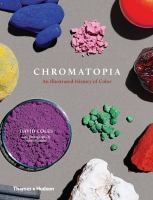 Chromatopia : an illustrated history of colour / Coles, David
“This origin story of history’smost vivid color pigmentsis perfect for artists, history buffs, science lovers, and design fanatics. …Spanning from the ancient world to modern leaps in technology, and vibrantly illustrated throughout, this book will add a little chroma to anyone’s understanding of the history of colors.” (adapted from Catalogue)

The mother of all jobs : how to have children and a career and stay sane(ish) / Armstrong, Christine
“…When Christine Armstrong became a mother, it never occurred to her that she would want to give up her job. But the truth is, combining work and small kids is hard, and when Christine tried it, she found herself desolate with misery. Determined to find a way forward, she looked for answers by interviewing other working mums and found that she wasn’t alone. The Mother of All Jobs brings together the wisdom of the women who opened up about everything (and we mean everything) into a manifesto for happy professional families. Ignoring the glossy lives presented on social media, this book shows that, while it’s not always pretty, working parents can thrive if they have the knowledge others learnt the hard way.” (adapted from Catalogue)

Win bigly : persuasion in a world where facts don’t matter / Adams, Scott
“Soon after Donald Trump declared his presidential candidacy, when most experts dismissed him as a joke who’d be gone before Iowa Scott Adams called Trump a master communicator in the same league as Abraham Lincoln and Steve Jobs. As a student of the art and science of persuasion, Adams recognized Trump’s deep toolbox for persuasion. On his popular blog, Adams predicted that Trump could go all the way…” (adapted from Catalogue)