“Stuff your eyes with wonder, he said, live as if you’d drop dead in ten seconds. See the world. It’s more fantastic than any dream made or paid for in factories.” – Fahrenheit 451 by Ray Bradbury (1953).
This month’s science fiction showcase picks are full of worlds of wonder and feasts of treats, including sumptuous, gorgeous, beautifully-illustrated new editions of both Ursula K. Le Guin’s seminal A Wizard of Earthsea series and Frank Herbert’s Dune Trilogy, as well as a new work by one of the science fiction world’s most beloved writers Mercedes Lackey called The Bartered Brides! 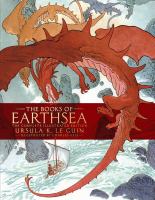 The books of Earthsea / Ursula K. Le Guin ; illustrated by Charles Vess.
“Ursula K. Le Guin’s Earthsea novels are some of the most acclaimed and awarded works in literature–they have received prestigious accolades such as the National Book Award, a Newbery Honor, the Nebula Award, and many more honors, commemorating their enduring place in the hearts and minds of readers and the literary world alike. Now for the first time ever, they’re all together in one volume–including the early short stories, Le Guin’s Earthsea Revisioned Oxford lecture, and a new Earthsea story, never before printed.” (Adapted from Syndetics summary)

The bartered brides / Mercedes Lackey.
“The threat of Moriarty is gone – but so is Sherlock Holmes. Even as they mourn the loss of their friend and colleague, psychic Nan Killian, medium Sarah Lyon-White, and Elemental Masters John and Mary Watson must be vigilant, for members of Moriarty’s network are still at large. And their troubles are far from over: in a matter of weeks, two headless bodies of young brides wash up in major waterways. A couple who fears for their own recently-wedded daughter hire the group to investigate, but with each new body, the mystery only deepens.” (Adapted from Syndetics summary)

The great Dune trilogy / Frank Herbert.
“Herbert’s evocative, epic tales are set on the desert planet Arrakis, the focus for a complex political and military struggle with galaxy-wide repercussions. Arrakis is the source of spice, a mind-enhancing drug which makes interstellar travel possible; it is the most valuable substance in the galaxy. When Duke Atreides and his family take up court there, they fall into a trap set by the Duke’s bitter rival, Baron Harkonnen. The Duke is poisoned, but his wife and her son Paul escape to the vast and arid deserts of Arrakis, which have given the planet its nickname of Dune.” (Adapted from Syndetics summary)

The consuming fire / John Scalzi.
“The Interdependency–humanity’s interstellar empire–is on the verge of collapse. The extra-dimensional conduit that makes travel between the stars possible is disappearing, leaving entire systems and human civilizations stranded. Emperox Grayland II of the Interdependency is ready to take desperate measures to help ensure the survival of billions. But arrayed before her are those who believe the collapse of the Flow is a myth–or at the very least an opportunity to an ascension to power. The Emperox and her allies are smart and resourceful, as are her enemies. Nothing about this will be easy… and all of humanity will be caught in its consuming fire.” (Adapted from Syndetics summary)

Magefall / Stephen Aryan.
“When magic is feared, the mages must learn to fight for themselves in this powerful sequel to the standout epic fantasy Mageborn by Stephen Aryan.
The land is in turmoil. Mages are hunted by men and gods alike. Even their own kind betray each other in the name of safety and protection.
With their last refuge fallen, two young mages must conspire against a god to show the world that their abilities aren’t a curse; they are the only way to ensure lasting peace.” (Adapted from Syndetics summary)

Foundryside : a novel / Robert Jackson Bennett.Foundryside: A Novel
“In a city that runs on industrialized magic, a secret war will be fought to overwrite reality itself. Sancia Grado is a thief, and a damn good one. And her latest target, a heavily guarded warehouse on Tevanne’s docks, is nothing her unique abilities can’t handle. But unbeknownst to her, Sancia’s been sent to steal an artifact of unimaginable power, an object that could revolutionize the magical technology known as scriving. To have a chance at surviving–and at stopping the deadly transformation that’s under way–Sancia will have to marshal unlikely allies and undergo her own transformation, one that will turn her into something she could never have imagined.” (Adapted from Syndetics summary)

The little shop of found things / Paula Brackston.
“Xanthe and her mother Flora leave London behind for a fresh start, taking over an antique shop in the historic town of Marlborough. Xanthe has always had an affinity with some of the antiques she finds. When she touches them, she can sense something of the past. When she has an intense connection to a beautiful silver chatelaine she has to know more. It is while she’s examining the chatelaine that she’s transported back to the seventeenth century where it has its origins. And there she discovers there is an injustice in its history.” (Adapted from Syndetics summary)