The New Zealand International Film Festival 2018 is nearly here! Tickets are booked, cinemas mapped out and movies selected and re-selected! The festival has such a range of fantastic movies that you wonder where all the ideas come from! Some can be found between the covers of some popular, and some more obscure literary works.  If you really enjoy something at the festival and want to read the inspiration source, some of them can be found here in our libraries.


Disobedience, directed by Sebastián Lelio, based on:

Disobedience / Alderman, Naomi
“Disobedience is a novel that illuminates a culture that has existed in Britain for centuries, yet remains almost entirely hidden. Naomi Alderman offers a contemporary take on the search for love, faith and understanding in a world filled with conflicting moral and sexual ideals.” (Catalogue)

Border, directed by Ali Abbasi, based on:

Let the old dreams die / Ajvide Lindqvist, John
This short story collection includes Burning adapted and expanded by Iranian-born Swedish filmmaker Ali Abbasi.
“A classic short story collection from the writer called Sweden’s Stephen King that continues the breathtaking story begun in the internationally acclaimed classic Let the Right One In, also in “Final Processing,” Lindqvist reveals the next chapter in the lives of the characters he created in Handling the Undead.” (Catalogue)

Cold Blooded: The Clutter Family Murders, directed by Joe Berlinger, based on:

In cold blood / Capote, Truman
“Truman Capote’s masterpiece, In Cold Blood, created a sensation when it was first published, serially, in The New Yorker in 1965. The intensively researched, atmospheric narrative of the lives of the Clutter family of Holcomb, Kansas, and of the two men, Richard Eugene Hickock and Perry Edward Smith, who brutally killed them on the night of November 15, 1959, is the seminal work of the “new journalism.” Capote’s account is so detailed that the reader comes to feel almost like a participant in the events.” (Catalogue)

Piercing, directed by Nicolas Pesce, based on:

Piercing / Murakami, Ryū
“The follow up to In the Miso Soup, Piercing confirms Ryu Murakami as the master of the psycho-thriller.” (Catalogue)

Wildlife, directed by Paul Dano, based on:

Wildlife / Ford, Richard
“Ford’s fourth novel is set in the same Western landscape that so distinguished his acclaimed collection Rock Springs, and with it he extends his reputation as one of the most compelling and eloquent storytellers of his generation, providing us with both the pleasures of narrative and the sad wisdom of art. Wildlife is the story of coming out into the world as it resolutely is, never the world we hope it is.” (Catalogue)

Juliet, Naked, directed by Jesse Peretz, based on:

Juliet, naked / Hornby, Nick
“This novel is about the nature of creativity and obsession, and how two lonely people can gradually find each other.” (Catalogue)

Burning, directed by Lee Chang-dong, based on:

The Elephant vanishes / Murakami, Haruki
This collection includes Barn Burning which has been translated into the film Burning by Korean director Lee Chang-dong.
“By turns haunting and hilarious, The Elephant Vanishes is further proof of Murakami’s ability to cross the border between separate realities — and to come back bearing treasure.” (Catalogue)

No Shame, directed by Brendan Donovan, based on:

The lazy boys : a novel / Shuker, R. Carl
The film No Shame by directed by Brendan Donovan is one of the New Zealand’s Best short film finalists of 2018.
“Like a punch in the stomach or a sustained cry, Carl Shuker’s risky and harrowing first person narrative is as visceral as Fight Club and as brutal as A Clockwork Orange. On the surface Richey’s actions are unforgivable, but his unformed and distorted world is immediate and recognizable to a generation brought up in a society indifferent to its own nihilism.” (Catalogue)

Lean on Pete, directed by Andrew Haigh, based on:

Lean on Pete : a novel / Vlautin, Willy
“Fifteen-year-old Charley Thompson wants a home; food on the table; a high school he can attend for more than part of a year; and some structure to his life. But as the son of a single father working at warehouses across the Pacific Northwest, he’s been pretty much on his own for some time. Lean on Pete opens as he and his father arrive in Portland, Oregon and Charley takes a stables job, illegally, at the local race track. It’s there that Charley meets Pete, an old horse who becomes his companion as he’s forced to try to make his own way in the world. A portrait of a journey, Lean on Pete is also the unforgettable story of a friendship and of hope in dark times.” (Adapted from fishpond.co.nz)

Breath, directed by Simon Baker, based on:

Breath / Winton, Tim
“Bruce Pike, or ‘Pikelet’, has lived all his short life in a tiny sawmilling town from where the thundering sea can be heard at night. He longs to be down there on the beach, amidst the pounding waves, but for some reason his parents forbid him. It’s only when he befriends Loonie, the local wild boy, that he finally defies them. Intoxicated by the treacherous power of the sea and by their own youthful endurance, the two boys spurn all limits and rules, and fall into the company of adult mentors whose own addictions to risk take them to places they could never have imagined.” (Catalogue)

We also have to mention a documentary we’re very excited about seeing: Ex Libris: The New York Public Library. “Standing in for libraries everywhere, the magnificent New York Public Library is explored and extolled in the great Frederick Wiseman’s latest ode to the importance of essential institutions in politically tumultuous times.” We can’t wait! In the meantime, you might enjoy this book, featuring NYPL in its pages: 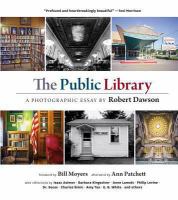 The public library : a photographic essay / Dawson, Robert
“Many of us have vivid recollections of childhood visits to a public library: the unmistakable musty scent, the excitement of checking out a stack of newly discovered books. Over the last eighteen years, photographer Robert Dawson has crisscrossed the country documenting hundreds of these endangered institutions. The Public Library presents a wide selection of Dawson’s photographs from the majestic reading room at the New York Public Library to Allensworth, California’s one-room Tulare County Free Library built by former slaves. Accompanying Dawson’s revealing photographs are essays, letters, and poetry by some of America’s most celebrated writers. A foreword by Bill Moyers and an afterword by Ann Patchett bookend this important survey of a treasured American institution.” (Catalogue)