Turning : a swimming memoir / Jessica J. Lee.
“At the age of twenty-eight, Jessica Lee, who grew up in Canada and lived in London, finds herself in Berlin. Alone. Lonely, with lowered spirits thanks to some family history and a broken heart, she is there, ostensibly, to write a thesis. And though that is what she does daily, what increasingly occupies her is swimming. So she makes a decision that she believes will win her back her confidence and independence: she will swim fifty-two of the lakes around Berlin, no matter what the weather or season. This book is for everyone who loves swimming, who wishes they could push themselves beyond caution, who understands the deep pleasure of using their body’s strength, who knows what it is to allow oneself to abandon all thought and float home to the surface.” (Syndetics summary)

Dark Forest, Deep Sea : reflections of a hunter / Richard Hall.
“In the wild there is an element that cannot be seen, tasted, heard or smelt – it can only be felt, and it is a feeling of enchantment. After his first hunting experience in New Zealand as a young man, Richard Hall has been drawn back again and again, wanting to relive the feeling only this country’s wilderness can give him. Dark Forest, Deep Sea goes beyond recollections of one man’s hunting trips. It delves into the emotions and sensations at the heart of the experience, and the reason for doing it. This is the human story of hunting.” (Syndetics summary)

Battling the Oceans in a Rowboat : crossing the Atlantic and North Pacific on oars and grit / Mick Dawson.
“The heart-pounding story of rowing expert Mick Dawson’s most challenging feats on the open water, culminating in his greatest achievement: crossing the North Pacific Ocean in a small rowboat. Storms, fatigue, equipment failure, intense hunger, and lack of water are just a few of the challenges that ocean rower Mick Dawson, endured whilst attempting to complete one of the World’s “Last Great Firsts.” In this nail-biting, man-against-nature true story, Dawson, former Royal Marine Commando, Guinness world record ocean rower and high seas adventurer, takes on the Atlantic and ultimately the North Pacific Oceans.” (Syndetics summary)

In the Line of Fire : the inside story from the Lions head coach / Warren Gatland with Gerry Thornley.
“Warren Gatland’s British & Irish Lions Tour Diary is the ultimate chronicle of this summer’s remarkable and historic Lions tour to New Zealand. The book is the Head Coach’s wonderfully candid and vibrant record of the turbulent peaks and troughs, the triumphs and despairs, of one of sport’s toughest challenges. It gives rugby fans an unparalleled front-row seat with the squad, recounting intriguing details on everything from pre-tour planning and strategy, to on-tour experiences, analysis and decision-making. It all adds up to a thrillingly definitive exposition and post-mortem of a mind-blowing six weeks in the cauldron which forged the mighty All Blacks.” (Publisher’s description)

Run for Your Life : mindful running for a happy life / William Pullen.
“We all know how a long walk, a slow jog or a brisk run can free our minds to wander, and give us a powerful uplifting feeling. Some call it the ‘runner’s high’, others put it down to endorphins. But what if we could channel that energy and use it to make positive change in our lives? William Pullen is a psychotherapist who helps people to work through their issues using his revolutionary method, Dynamic Running Therapy. His is a radical new approach to mindfulness. Whether you are looking for strategies to cope with anxiety, change or decision-making, or simply want to focus your mind while pounding the streets, Run for Your Life offers a series of simple mental routines that unleash the meditative, restorative powers of exercise.” (Syndetics summary) 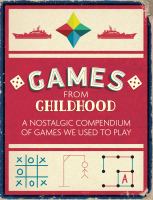 Games from Childhood : a nostalgic compendium of games we used to play / compiled and edited by Karen Dolby.
“A wonderfully nostalgic collection of the games we played in our childhood, when all you needed was a pen, paper, and your imagination. All the classics are here, from filling in the grids of battleships and hangman, to tic-tac-toe, categories, crossed words, fortune teller, and more, all presented in a gorgeous vintage style. The perfect antidote to our modern, digital world, you’ll enjoy re-living your childhood as you test your logic and reasoning and have fun playing these wonderful games.” (Syndetics summary)

Ventoux : sacrifice and suffering on the giant of Provence / Jeremy Whittle.
“Mont Ventoux, the “Giant of Provence,” is a legendary and extreme mountain climb. The formidable ascent of Ventoux’s south side encapsulates both the unforgiving brutality and epic beauty of this intense sport, but also brings to the forefront cycling’s on-going battle with scandal. Revealing the little-known history of racing on Ventoux, author Jeremy Whittle interviews such memorable cyclists as Chris Froome, Eddy Merckx, Greg LeMond, Lance Armstrong, Bernard Hinault, Dave Brailsford, Tyler Hamilton, and many others, exploring both the fear and respect of those who dare to conquer cycling’s most notorious ascent.” (Syndetics summary) 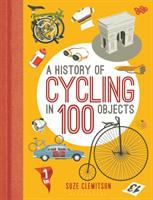 A History of Cycling in 100 Objects / Suze Clemitson.
“Absorbing and quirky look at the history of cycling and the development of bike-related design through 100 pivotal objects. Charting the journey from the Laufmaschine to the Brompton, through the early prototypes and the two-wheeled toys of the aristocracy, to the speed machines we know today. Filled with fascinating photographs and illustrations, immerse yourself in the history of cycling, from the boneshaker via the bicycle powered washing machine, to cuddly lions and ball bearings.” (adapted from back cover)

Losing It : a lifetime in pursuit of sporting excellence / Simon Barnes.
“Simon Barnes has taken part in seven summer Olympic Games, five World Cups and ten Ashes series. Well, not exactly taken part, but certainly he was there and writing hard. And always, behind every victory and every defeat he ever recorded, there was the reference of his own sporting career, in which the bitter beauties of failure were occasionally varied with the intoxication of success. His sporting failure has been a joyous and profoundly informative part of his life, and here he tells the story of it.” (Book jacket)

No is a Four-Letter Word : How I failed spelling but succeeded in life / Chris Jericho.
“Three-time New York Times bestselling author and six-time WWE champion Chris Jericho shares 20 of his most valuable lessons for achieving your goals and living the life you want, jam-packed with fantastic stories and the classic off-the-wall, laugh-out-loud Jericho references he’s famous for, with a foreword by Paul Stanley. After reading No Is a Four-Letter Word, you’ll discover that you might have what it takes to succeed as well… you just need to get out there and do it. That’s what Jericho would do.” (Syndetics summary)

Tiger Woods / Jeff Benedict and Armen Keteyian.
“Based on years of reporting and interviews with more than 250 people from every corner of Tiger Woods’s life–a sweeping, revelatory, and defining biography of an American icon.” (Book jacket)