There is a rich diversity in this month’s graphic novel picks, from continuations of acclaimed series such as Arthur De Pins’ The Revolution of the Crabs to historic seminal cult works such as the DC House of Horror anthology to a wonderful graphic novel celebrating the rebel ladies who rocked the world. All in all it’s a rich cornucopia with works to suit all tastes.

The death of Stalin / writer, Fabien Nury ; artist, Thierry Robin.
“On March 1, 1953, the Secretary General of the Central Committee of the Communist Party of the Soviet Union, Joseph Stalin, had a severe stroke. A doctor could not be called until the Central Committee had convened, voted, and agreed on which doctor to use, a task made more complex by the fact that Stalin had just ordered the deaths of many of the Soviet Union’s leading physicians. And so began the bureaucratic merry-go-round that became the intense and underhanded struggle for control of a nation.” (Adapted from Syndetics summary) 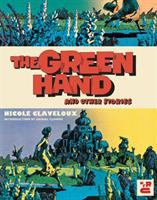 The green hand and other stories / Nicole Claveloux with Edith Zha ; introduction by Daniel Clowes ; translated by Donald Nicholson-Smith.
“Nicole Claveloux’s short stories–originally published in the late 1970s and never before collected in English–are among the most beautiful comics ever drawn: whimsical, intoxicating, with the freshness and splendor of dreams. In hallucinatory colour or elegant black-and-white, she brings us into lands that are strange but oddly recognizable, filled with murderous grandmothers and lonely city dwellers, bad-tempered vegetables and walls that are surprisingly easy to fall through. This new selection, designed and introduced by Daniel Clowes, presents the full achievement of an unforgettable, unjustly neglected master of French comics.” (Adapted from Syndetics summary) Orion’s outcasts / Corbeyran & Jorge Miguel ; Corbeyran, writer ; Jorge Miguel, artist & colorist ; Mark Bence, translator.
“Now, instead of Kolhen’s warrior tattoo, the young man wears the mark of the rejected, the ‘outcasts’ as they are known on the planet Absalon. Determined to prove his innocence and to get revenge on those who framed him, Kolhen escapes captivity with the help of the fiery Tryana, another of society’s pariahs. On his quest, Kolhen meets a mysterious woman with golden hair, who’s armed with strange and powerful weaponry, and who claims to be an envoy from another planet: Earth.” (Adapted from Syndetics summary)

Rashomon : a Commissioner Heigo Kobayashi case / story and art by Victor Santos ; translations by Katie LaBarbera.
“Victor Santos (Polar, Violent Love) writes and illustrates a crime and mystery story inspired by Ryunosuke Akutagawa’s tales featuring the heroic commissioner Heigo Kobayashi. When the body of a skilled samurai is found along the road to Yamashina in feudal Japan, the search begins for his killer. Detective Heigo Kobayashi takes the case but finds only dead-end clues and no first-hand witnesses.” (Adapted from Syndetics summary)

Brazen : rebel ladies who rocked the world / Pénélope Bagieu ; English translation by Montana Kane.
“Throughout history and across the globe, one characteristic connects the daring women of Brazen : their indomitable spirit.With her characteristic wit and dazzling drawings, celebrated graphic novelist Pénélope Bagieu profiles the lives of these feisty female role models, some world famous, some little known. From Nellie Bly to Mae Jemison or Josephine Baker to Naziq al-Abid, the stories in this comic biography are sure to inspire the next generation of rebel ladies.” (Adapted from Syndetics summary)

The Hellblazer. Vol. 3, The inspiration game / Tim Seeley, Richard Kadrey, writers ; Jesús Merino, Davide Fabbri, José Marzán Jr., artists.
“Death doesn’t just become John Constantine–it shadows the poor bastard’s every step, from his home turf of London to the streets of San Francisco. What’s more, it has a nasty habit of striking where the DC Universe’s street-level sorcerer least expects it–like his dreams. After waking from a vengeful drunken nightmare, Constantine finds that a real-life murder has been committed. Could he have done the deed himself in a blacked-out rage? Or is some sinister force turning his subconscious mind into the ultimate untraceable weapon?” (Adapted from Syndetics summary)

The march of the crabs [3] : the revolution of the crabs / written and illustrated by Arthur de Pins ; translated by Edward Gauvin.
“The March of the Crabs concludes in the third volume of the Eisner Award-nominated series. Inhabiting the Gironde estuary, there is a race of crabs known for their strange defect: unable to evolve, they are condemned to spend their lives walking a single straight line. When Sunny, Boater, and Guitar, discovered a way to spur their biology and change directions, their bold moves broke the crabs into two clans: the rigid (who walk straight) and the turners (who change direction). Now, these two factions are prepared for battle as the other underwater creatures look on, ready to take a side. But the stunning rebellion comes in the crosshairs of another species on the brink of their own cataclysmic change of course… humanity.” (Adapted from Syndetics summary)

Bullseye : the Colombian connection.
“He’s a ruthless hitman who never misses, a deadly foe who can turn any object into a lethal weapon! But why is the Marvel Universe’s most dangerous assassin heading to Colombia to take aim at a drug cartel? Find out as Bullseye takes charge!” (Adapted from Syndetics summary)

Rock Candy Mountain. Volume one / written & drawn by Kyle Starks.
“It’s the first collection of the manic, hobo fighting epic that is Rock Candy Mountain. Come inside and meet the mysterious, unbeatable hobo Jackson on his quest to find the mythical hobo heaven. Meet his sidekick Pomona Slim. But watch out for the Devil! And the FBI! And the Hobo Mafia too! It’s a fantastical fisticuff frolic through post- World War II America via the rails and backroads through underground fight clubs, prison and the hobo jungles wrought with dangers, hobo fights, jokes and locomotive excitement.” (Adapted from Syndetics summary)

Rom [3] : long roads to ruin / plot and script by Chris Ryall & Christos Gage ; art by David Messina ; pencils by Guy Dorian, Sr. ; inks by Michele Pasta and Sal Buscema.
“Rom now has help in his war against the Dire Wraiths in the form of additional Solstar Knights and super-powered human allies both… so why is the battle going from bad to worse? The Wraiths’ master plan grows and Rom can’t even see it, let alone find any way to stop it.” (Adapted from Syndetics summary)