Go the distance with these books if you want to go further than you’ve ever gone before. You can read about the life of an ultra distance runner, slow down with the man who walked across America or push your mental limits as you hear the story of a chess world champion. Alternatively you can go off the beaten track with pub games or even hot air ballooning in Graham Lanceley’s exploration of unique sports and pastimes.

Walking to Listen : 4,000 miles across America, one story at a time / Andrew Forsthoefel.
“A memoir of one young man’s coming of age on a cross-country trek, told through the stories of the people of all ages, races, and inclinations he meets along the highways of America.” (Amazon.com) 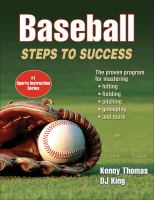 Baseball : steps to success / Kenny Thomas, DJ King.
“Become a fundamentally sound player in every aspect of the game with ‘Baseball: Steps to Success’. For years, the Steps to Success series has helped people around the world master the fundamentals of sport. Its unique progressive instructional approach to every skill makes learning the game of baseball easier and more enjoyable than ever before.” (Syndetics summary)

Trail Blazer : My Life as an Ultra-distance Trail Runner / Ryan Sandes with Steve Smith.
“What does it take to run a six-day race through the world’s harshest deserts? Or 100 miles in a single day at altitudes that would leave you breathless just walking? More than that, though: what is it like to win these races? South Africa’s ultra-trail-running superstar Ryan Sandes has done just that.” (Book Jacket)

Alternative Sports and Pastimes : an A-Z / Graham Lanceley.
“This book takes us through a selection of fifty alternative sports and pastimes. Some of these are activities that readers won’t have heard of, such as ‘tchoukball’. This modern sport, invented in the 1970s, based on teamwork and with the intention of avoiding collisions or injuries, takes its name from the sound of the ball rebounding from a frame. Graham also covers more well-known sports and pastimes, such as gliding and hot air ballooning. Traditional English pub games are also represented, such as bagatelle, shove ha’penny and skittles, as well as traditional outdoor activities such as falconry and morris dancing.” (Syndetics summary)

No Barriers : A Blind Man’s Journey to Kayak the Grand Canyon / Erik Weihenmayer and Buddy Levy.
“No Barriers is about my journey since coming down from Mt. Everest in 2001, and the path to where I am today. It is the story of my own life, the personal and professional struggles in the pursuit of growth, learning, and family, as well as a dream to kayak one of the world’s great rivers as a blind athlete. It is also about the many people I’ve encountered along the way who possess what I call a “No Barriers” mindset, who live a No Barriers life. This book is about making the hard choices to fuel that flickering light, so that we can ignite with purpose and become our very best selves.” (Provided by publisher)

Unbound : A Story of Snow and Self-discovery / Steph Jagger.
“A young woman follows winter across five continents on a physical and spiritual journey that tests her body and soul, in this transformative memoir, full of heart and courage, that speaks to the adventurousness in all of us…. She quit her job, took a second mortgage on her house, sold everything except her ski equipment and her laptop, and bought a bundle of plane tickets. For the next year, she followed winter across North and South America, Asia, Europe, and New Zealand–and up and down the mountains of nine countries–on a mission to ski four million vertical feet in a year.” (Provided by publisher)