This month’s picks are a stark reminder that disruption and change are built into the fabric of daily life and therefore: history. The humanity and sensitivity with which these stories are told are a revolt in themselves to the violence they often contain. Some books, like the one published by the brand new National Museum of African American History in Washington D.C.’s Smithsonian, Dream a World Anew, use this change as a central driver – an inspiring compass through adversity and breakthroughs, rather than struggle alone.

The Soviet century / Moshe Lewin ; edited by Gregory Elliott.
“Although the formal structures of the USSR are defunct, Lewin argues that a ghost of the system still lives as a biographical and institutional reality, especially in Russia. For those interested in the history of the Soviet Union, this study will provide a lavish feast, as it is full of empirical and interpretive detail about its institutions and leaders. Written by one of the old Soviet hands, this work, as a one-volume history of the USSR, will be hard to replace.” (adapted from Syndetics summary)

The Great War for New Zealand : Waikato 1800-2000 / Vincent O’Malley.
“A monumental new account of the defining conflict in New Zealand history. It was war in the Waikato in 1863-64 that shaped the nation in all kinds of ways: setting back Māori and Pākehā relations by several generations and allowing the government to begin to assert the kind of real control over the country that had eluded it since 1840. Vincent O’Malley focuses on the human impact of the war, its origins and aftermath.”  (adapted from Syndetics summary)

Sisters of the Somme : true stories from a First World War field hospital / Penny Starns.
“With First World War casualties mounting, there was an appeal for volunteers to train as front-line medical staff. Despite their training these young women were ill-prepared for the anguished cries of the wounded and the stench of gangrene and trench foot awaiting them at the Somme. Isolated from friends and family, most discovered an inner strength, forging new and close relationships with each other and establishing a camaraderie that was to last through the war and beyond.” (adapted from Syndetics summary) 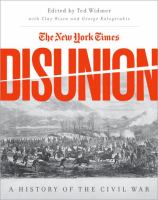 Disunion : a history of the Civil War / edited by Ted Widmer, with Clay Risen and George Kalogerakis.
“Between 2011 and 2015, the Opinion section of The New York Times published Disunion, a series marking the long string of anniversaries around the Civil War, the most destructive, and most defining, conflict in American history. The works were startling in their range and direction, some taking on major topics, like the Gettysburg Address and the Battle of Fredericksburg, while others tackled subjects whose seemingly incidental quality yielded unexpected riches and new angles.” (adapted from Syndetics summary)

Passchendaele : requiem for doomed youth / Paul Ham.
“Passchendaele tells the story of ordinary men in the grip of a political and military power struggle that determined their fate and has foreshadowed the destiny of the world for a century. Paul Ham lays down a powerful challenge to the idea of war as an inevitable expression of the human will, and examines the culpability of governments and military commanders in a catastrophe that destroyed the best part of a generation.” (adapted from Syndetics summary)

Caught in the revolution : Petrograd, 1917 / Helen Rappaport.
“Caught in the Revolution is Helen Rappaport’s masterful telling of the outbreak of the Russian Revolution through eye-witness accounts left by foreign nationals who saw the drama unfold. Between the first revolution in February 1917 and Lenin’s Bolshevik coup in October, Petrograd (the former St. Petersburg) was in turmoil. Rappaport draws upon this rich trove of material, to carry us right up to the action–to see the Revolution as it happened to an assortment of individuals who suddenly felt themselves trapped in a ‘red madhouse'” (adapted from Syndetics summary) 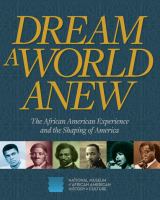 Dream a world anew : the African American experience and the shaping of America / introduction by Lonnie G. Bunch III ; edited by Kinshasha Holmes Conwill.
“History will be made and embraced when the National Museum of African American History and Culture, a long-in-the-works and crucial addition to the Smithsonian Institution, opens on the National Mall in Washington, D.C., in September 2016. With 275 color illustrations and essays brief and extended by two dozen scholars and curators, this welcoming overview covers a broad spectrum of subjects from slavery to African American artists and athletes.” (adapted from Syndetics summary)

Beautiful idiots and brilliant lunatics : a sideways look at twentieth-century London / Rob Baker.
“From the return of local hero Charlie Chaplin to the protests that blighted the Miss World competition in 1970, the book covers the events and personalities that reflect the glamorous, scandalous, political and subversive place London was and is today. Meticulously researched and beautifully written, the stories span the twentieth century and cover the width and breadth of the capital, revealing that London is much more than the sum of its parts.” (summary adapted from amazon.com)

Hopeless but optimistic : journeying through America’s endless war in Afghanistan / Douglas A. Wissing.
“Wissing is everywhere in Afghanistan, sharing an impressionistic view from little white taxis coursing across one of the world’s most mine-ridden places; and compelling inside views from within embattled frontline combat outposts, lumbering armored gun trucks and flitting helicopters, brain trauma clinics, and Kabul’s Oz-like American embassy. He includes the real stuff of life: the austere grandeur of Afghanistan and its remarkable people; warzone dining, defecation, and sex; as well as the remarkable shopping opportunities for men whose job is to kill.” (adapted from Syndetics summary)