August’s listed books are quite a mixed bunch, across a range of religions. However, they invite the reader to challenge their misconceptions, and look below the surface to think more deeply about our beliefs and moral decisions.

The faith of Christopher Hitchens : the restless soul of the world’s most notorious atheist, by Larry Alex Taunton.
“Hitchens was a man of many contradictions: a Marxist in youth who longed for acceptance among the social elites; a peacenik who revered the military; a champion of the Left who was nonetheless pro-life, pro-war-on-terror, and after 9/11 something of a neocon; and while he railed against God on stage, he maintained meaningful – though largely hidden from public view – friendships with evangelical Christians like Francis Collins, Douglas Wilson, and the author Larry Alex Taunton…. Taunton traces Hitchens’s spiritual and intellectual development from his decision as a teenager to reject belief in God to his rise to prominence as one of the so-called “Four Horsemen” of the New Atheism.” (drawn from Syndetics summary)

Islam evolving : radicalism, reformation, and the uneasy relationship with the secular West, by Taner Edis.
“How is Islam adapting to the rapid changes of the 21st century? Despite political unrest and terrorism, the author argues that many Muslim societies are successfully developing their own versions of modern life. In contrast to the secular liberal model that prevails in the West, Islam is demonstrating alternative ways to be modern while maintaining a distinctly Muslim worldview. Professor Edis, an American physicist with a secular viewpoint who was raised in Turkey, is uniquely qualified to evaluate the interplay of modern trends and Islamic values. He devotes separate chapters to prominent examples of what he calls Islam’s “pious modernity.” … This balanced overview of Islam’s relationship with the modern world will be of interest to open-minded readers in both the West and the East.” (Syndetics summary)

Break the norms : questioning everything you think you know about God and truth, life and death, love and sex, by Chandresh Bhardwaj.
“Have you ever felt like you’re living out a script written for you by others–in your work, your relationships, or spirituality? “To break through the norms we’ve been conditioned to believe is an act of rebellion,” writes Chandresh Bhardwaj. “We must be prepared to be brutally honest. We must overturn our assumptions and unlearn our suffering. We must be willing to discover our real reasons for being alive….Authenticity is inherent each of our souls. When we start to be authentic, we start to get back in touch with our divine source.” (drawn from Syndetics summary)

Why be Jewish? : a testament, by Edgar M. Bronfman.
Completed just weeks before the author’s death, this charts his respect and love for his Jewish faith. This is a personal journey and walk through the main ideas and beliefs, explaining meanings and traditions gathered over a lifetime of study. He explains that even secular Judaism is still immersed in moral values derived from the ancient texts.

Queer virtue : what LGBTQ people know about life and love and how it can revitalize Christianity, by Reverend Elizabeth M. Edman.
“Christianity, at its scriptural core, incessantly challenges its adherents to rupture false binaries, to “queer” lines that pit people against one another. Thus, Edman asserts that Christianity, far from being hostile to queer people, is itself inherently queer. Arguing from the heart of scripture, she reveals how queering Christianity – that is, disrupting simplistic ways of thinking about self and other – can illuminate contemporary Christian faith. Pushing well past the notion that “Christian love = tolerance,” Edman offers a bold alternative: the recognition that queer people can help Christians better understand their fundamental calling and the creation of sacred space where LGBTQ Christians are seen as gifts to the church.” (Drawn from the Syndetics summary)

Agnostic : a spirited manifesto, by Lesley Hazleton.
“Hazleton gives voice to the case for agnosticism, breaks it free of its stereotypes as watered-down atheism or amorphous “seeking,” and celebrates it as a reasoned, revealing, and sustaining stance toward life. Stepping over the lines imposed by rigid conviction, she draws on philosophy, theology, psychology, science, and more to explore, with curiosity and passion, the vital role of mystery in a deceptively information-rich world; to ask what we mean by the search for meaning; to invoke the humbling yet elating perspective of infinity; to challenge received ideas about death; and to reconsider what “the soul” might be.” (drawn from the Syndetics summary)

When awareness becomes natural : a guide to cultivating mindfulness in daily life, by Sayadaw U Tejaniya ; edited by Robert French ; foreword by Steven Armstrong.
“Meditation is great – but it’s not what Buddhist practice is all about. That’s the message of this engaging and funny Burmese Buddhist monk, and it’s a message that is finding a significant following among Westerners in the Insight Meditation tradition. Sayadaw U Tejaniya teaches how to bring awareness to any sort of activity in order to discover deep insight and liberation from suffering. It works in sitting meditation, but it works just as well when sorting the laundry or doing data entry. “My teachings are nothing new,” he says. “They are, as always, based on the four foundations of mindfulness: awareness of the body, awareness of feelings and sensations, awareness of mind, and understanding of dhamma or nature, i.e., mind and matter.” (drawn from Syndetics summary)

Tears to triumph : the spiritual journey from suffering to enlightenment, by Marianne Williamson.
“The internationally recognized teacher, speaker, and New York Times bestselling author of A Return to Love argues that our desire to avoid pain is actually detrimental to our lives, disconnecting us from our deepest emotions and preventing true healing and spiritual transcendence. Marianne Williamson is a bestselling author, world-renowned teacher, and one of the most important spiritual voices of our time. In Tears to Triumph, she argues that we – as a culture and as individuals – have learned to avoid facing pain. By doing so, we are neglecting the spiritual work of healing” (drawn from the publisher’s description) 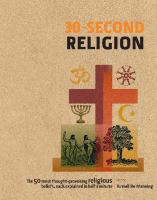 30-second religion : the 50 most thought-provoking religious beliefs, each explained in half a minute, editor, Russell Re Manning ; contributors, Richard Bartholomew…[et al.]
As the title explains, this is not an in-depth study. It is designed to be a quick intro to the main beliefs and history of the major religions from around the world, allowing easy comparison across their main tenets, beliefs and practices, which can be an aid to further research.