From the sublime to the bizarre, with everything in between, this month’s selection of new Graphic Novels, as to be expected, has it all. Highly recommended is the collection, edited by Gary Goth, of award winning cartoonist Gahan Wilson’s work, titled Gahan Wilson’s Out There.

Anathema. Vol. 1, The evil that men do / written & lettered by Rachel Deering ; art by Christopher Mooneyham, Wesley St. Claire ; colours by Fares Maese, Ian Herring.
“How far will one woman go for the salvation of her beloved? Mercy Barlowe’s love for Sarah brings down Hell when her puritanical father discovers them together and has his own daughter burnt at the stake. But death is not the end. A monstrous cult of shapeshifters steal Sarah’s soul as part of its twisted plans to resurrect an ancient evil.To defeat them, Mercy must take on a new form that will give her the power and fury needed to defeat the cult. She must become a werewolf.” (Adapted from Syndetics summary)

Invisible Republic. Volume 01 / created by Gabriel Hardman & Corinna Bechko ; written by Gabriel Hardman & Corinna Bechko ; art by Gabriel Hardman ; colors by Jordan Boyd.
“Arthur McBride’s regime has fallen. His planet has been plunged into chaos, his story shrouded in mystery, until reporter Croger Babb discovers the journal of Arthur’s cousin, Maia. Inside is the violent, audacious, hidden history of the legendary freedom fighter. Erased from the official record, Maia alone knows how dangerous her cousin really is, and what truly happened to bring him to power.” (Adapted from Syndetics summary)

Secret identities. Volume 1 / story by Brian Joines ; story edits by Jay Faerber ; art by Ilias Kyriazis.
“The supergroup known as The Front Line have just invited new hero Crosswind to join them. But what they don’t know is that Crosswind is a mole, sent to learn all their secrets. And the Front Line have many secrets.” (Adapted from Syndetics summary)

Headspace / writen by Ryan K. Lindsay ; illustrated by Eric Zawadzki & Sebastian Piriz.
“The inhabitants of Carpenter Cove discover their strange town is actually a construct in the mind of a killer. Shane, the sheriff, wants to get back to his real life but one dark connection between him and the killer is going to make him rethink everything.” (Adapted from Syndetics summary) 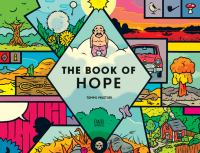 The book of hope / by Tommi Musturi ; translated by Pauliina Haasjoki.
“In a way that only the medium of comics can, The Book Of Hope slows the reader down to the rhythms of the silent life of a retired couple living in a rural countryside. Behind the static, routine moments of everyday life something bigger takes shape. A flash of encroaching death starts to consume the husband, leading to visions and questions. This is a thoughtful exploration of the human condition and the series of mostly quotidian moments that make up most of our lives.” (Adapted from Syndetics summary)

G.I. Zombie. Volume 1, A star spangled war story / written by Jimmy Palmiotti, Justin Gray ; art and colors by Scott Hampton ; letters by Rob Leigh.
“Meet the soldier they call “G.I. ZOMBIE,” a man who is neither dead nor alive, who fights for his country again and again and again.” (Adapted from Syndetics summary)

Tiger lung / created by Simon Roy with Jason Wordie.
“ Contains the stories, Beneath the ice, The Hyena’s daughter and Song for the dead” (Adapted from Syndetics summary)

Death vigil. Volume 1 / created by Stjepan Sejic ; cover art, Stjepan Sejic ; editor, Betsy Gonia ; book design and layout, Tricia Ramos.
“Join the Death Vigil in their ongoing war against the ever-growing power of the Primordial Enemy! Only catch is you have to die first. Become a corporeal immortal Death Knight and obtain reality-altering weaponry in the never-ending battle between good and evil.” (Adapted from Syndetics summary)

Gahan Wilson’s Out there / editor, Gary Groth.
“Out There features the over 250 cartoons that Wilson drew during his tenure with the magazines as well as all four covers he rendered,none of which have seen the light of day since their first appearance 50 years ago. Wilson also contributed short stories, movie, and book reviews, which are included as well. Out There resurrects hundreds of virtually unseen cartoons by one of the 20th century’s masters of the form.” (Adapted from Syndetics summary)