Reach beyond yourself. This selection covers a smorgasbord of interests; from sports involving working with animals, teamwork, and those that call upon personal interests.

The Goshawk / T.H. White ; with a foreword by Helen Macdonald.
“First published in 1951, T.H. White’s memoir describes with searing honesty his attempt to train a wild goshawk, a notoriously difficult bird to master. With no previous experience and only a few hopelessly out-of-date books on falconry as a guide, he set about trying to bend the will of his young bird Gos to his own. Suffering setback after setback, the solitary and troubled White nonetheless found himself obsessively attached to the animal he hoped would one day set him free.” (Syndetics summary)

After the Final Whistle : the first Rugby World Cup and the First World War / Stephen Cooper ; foreword by Jason Leonard, OBE.
“As Britain’s Empire went to war in August 1914, rugby players were the first to volunteer. They led from the front and paid a disproportionate price. In 1919, a grateful Mother Country hosted a rugby tournament: sevens teams at eight venues, playing 17 matches to declare a first “world champion.” There had never been an international team tournament like it. For the first time teams from Australia, Canada, New Zealand, South Africa, Britain, and France were assembled in one place. Rugby held the first ever “World Cup.” This is the story of rugby’s journey through World War I to its first World Cup, and how those values endure today.” (Syndetics summary) 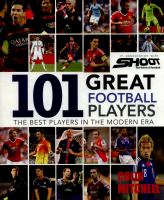 101 Great Football Players : the best players in the modern era / Colin Mitchell.
“101 Great Football Players profiles the best and brightest players in the beautiful game today. From veterans such as Lionel Messi and Frank Lampard, to promising up-and-comers like Jack Wilshere and Edinson Cavani, the chosen 101 have all made, or look set to make, an indelible impression on the game.” (Syndetics summary) 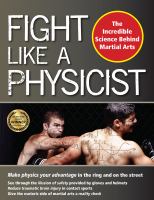 Fight Like a Physicist : the incredible science behind martial arts / Jason Thalken, PHD.
“Fight Like a Physicist provides an in-depth, sometimes whimsical look into the physics behind martial arts for sport and self-defense. Whether you are an experienced martial artist or a curious enthusiast, this book can give you an “unfair advantage” by unraveling the complex science of effective fighting techniques and examining the core principles that make them work.” (Syndetics summary)

Mountain Biking : The Manual / [Chris Ball and Huw Williams].
“This is an essential reference book for anyone wanting to learn more and improve their skills in mountain biking. Each chapter features step-by-step guidance and is supported by unique insights from today’s best riders.” (Syndetics summary)

The World at My Feet / Tom Denniss.
“On 31 December 2011, Australian Tom Denniss took two years off from his successful business career to take on a remarkable challenge. He embarked upon a run around the world. A run that would take more than 20 months, and cover over 26,000 km, the equivalent of 622 marathons in an equivalent number of days. In The World at My Feet, he shares his fascinating and sometimes frightening experiences along the way, with insights and anecdotes from all over the world — all at a pace which allows you to really appreciate the experience.” (Syndetics summary)

Fast into the Night : a woman, her dogs, and their journey north on the Iditarod Trail / Debbie Clarke Moderow.
“A captivating memoir of one woman’s attempt to finish the Iditarod, led by her team of spunky huskies with whom she shares a fascinating and inextricable bond…. Fast into the Night is an exquisitely written memoir of a woman, her dogs, and what can happen when someone puts herself in that place between daring and doubt — and soldiers on.” (Syndetics summary)

Inverting the Pyramid : the history of soccer tactics / Jonathan Wilson.
“In INVERTING THE PYRAMID, Jonathan Wilson pulls apart the finer details of the world’s game, tracing the global history of tactics, from modern pioneers right back to the beginning when chaos reigned. Along the way, he looks at the lives of great players and thinkers who shaped the sport and probes why the English, in particular, have ‘proved themselves unwilling to grapple with the abstract’.” (Syndetics summary) 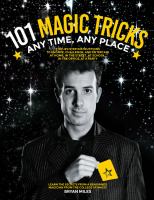 101 Magic Tricks : any time, any place / Bryan Miles.
“Learn 101 simple magic tricks to astonish and amaze!….amaze everyone you know with easy-to-master tricks and illusions…. Bryan Miles will guide you through astonishing feats such as: the foundations of magic including: The Hand, The Deck of Cards, Mechanic’s Grip and Biddle Grip, Classic Two-Handed Spread, Cutting the Cards and magic at school or college, birthday magic, restaurant magi, and more.” (Syndetics summary) 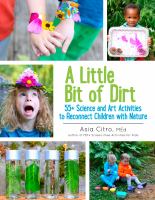 A Little Bit of Dirt : 55+ science and art activities to reconnect children with nature / Asia Citro, MEd.
“Dandelion Bubbles, Rain Drums, Seed Bomb Lollipops and more! Bursting with creative hands-on outdoor science and art activities, A Little Bit of Dirt is full of motivation to get outside and explore. Whether you’re investigating the health of your local stream, making beautiful acrylic sun prints with leaves and flowers, running an experiment with your backyard birds, or concocting nature potions, you’ll be fostering an important connection with nature. The engaging activities encourage the use of the senses and imagination and are perfect for all ages. Discover more about the natural world waiting just outside your door!” (Syndetics summary)

Desperate Steps : life, death, and choices made in the mountains of the Northeast / Peter W. Kick.
“In the backcountry, a single piece of gear could mean the difference between a comfortable night under the stars and a harrowing tale to tell once you’re home. Or it could mean that you don’t make it home at all. In this all-new collection, author Peter W. Kick recounts twenty true tales of backcountry misadventure and misfortune, including incidents along the famed Appalachian Trail, and seeks the lessons learned in each. Readers who immerse themselves in these near misses, methodical searches, and the gut-wrenching clarity of hindsight will be better prepared for whatever the wilderness brings.” (Syndetics summary)

First Ladies of Running : 22 inspiring profiles of the rebels, rule breakers, and visionaries who changed the sport forever / Amby Burfoot.
“First Ladies of Running tells the inspiring stories of these and other fiercely independent runners who refused to give up despite the cultural and sports barriers they faced. Legends such as Doris Brown, Francie Larrieu, Mary Decker, Jackie Hansen, Miki Gorman, and Grete Waitz are chronicled by Runner’s World editor Amby Burfoot. Burfoot even runs the 1994 Marine Corps Marathon with Oprah Winfrey, whose successful finish opened the floodgates for other women runners. First Ladies of Running is a beautiful and long-overdue tribute to the pioneers of women’s running and a gift of empowerment for female runners everywhere.” (Syndetics summary) 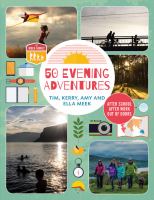 50 Evening Adventures / Tim, Kerry, Amy and Ella Meek.
“Here are simple and exciting ideas for spending time together out of doors, during the working week. The book is divided into two main sections with ideas for places to GO, and things to DO. A shorter final section offers ten healthy and filling dinner recipes that can be made or cooked outdoors.” (Syndetics summary)