This month some of DC’s biggest selling graphic novels have become available as eBooks through Overdrive. It’s a great chance to try a new series or enjoy an old favourite. If you want lots more graphic novels, check out Comics Plus Library Edition which all library users can now access through My Gateway. 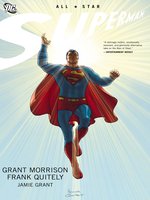 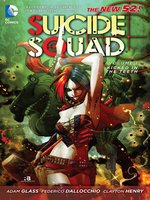 Suicide Squad, Volume 1, by Adam Glass (eBook)
“Writer and co-creator of the CW show Supernatural Adam Glass rolls out an all-new team of death-row super villains recruited by the government totake on missions so dangerous-they’re sheer suicide! The story begins with the Suicide Squad defeated, imprisoned and being interrogated about their newest mission. Harley Quinn, King Shark, Deadshot and company must make it out alive without revealing who’s pulling the strings behind their illegal operations. Who will be the first to crack under the pressure? More importantly will they make it all out alive? Collects issues #1-7.” (Adapted from Overdrive description) 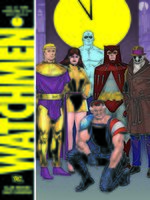 Watchmen: International Edition, by Alan Moore (eBook)
“This Hugo Award-winning graphic novel chronicles the fall from grace of a group of super-heroes plagued by all-too-human failings. Along the way, the concept of the super-hero is dissected as the heroes are stalked by an unknown assassin. One of the most influential graphic novels of all time and a perennial bestseller, WATCHMEN has been studied on college campuses across the nation and is considered a gateway title, leading readers to other graphic novels.” (Adapted from Overdrive description)

The Flash, Volume 1, by Brian Buccellato (eBook)
“The Fastest Man Alive returns with the writer/artist team of Francis Manapul and Brian Buccellato. The Flash knows he can’t be everywhere at once, but he has seemingly met his match when he faces DC Comics’ hottest new Super Villain, Mob Rule, who really can be everywhere at once! As Mob Rule wages a campaign of crime across Central City, including an electromagnetic blast that plunges the city into darkness, The Flash learns the only way he can capture Mob Rule and save Central City is to learn how to make his brain function even faster than before—but as much as it helps him, it also comes with a steep price.” (Overdrive description) 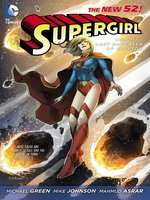 Supergirl, Volume 1, by Michael Green (eBook)
“Meet Supergirl. She’s got the unpredictable behavior of a teenager, the same powers as Superman – and none of his affection for the people of Earth. Crash landing on a strange new planet, Supergirl must come to grips with Krypton’s destruction with her cousin Superman and learn about her own recent past. But an ingenious new foe wants that same information – and will do anything to get it. Presenting an all-new take on Superman’s cousin Kara! Collects issues #1-7.” (Adapted from Overdrive description) 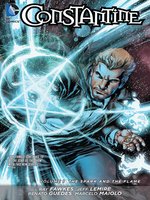 Constantine, Volume 1, by Ray Fawkes (eBook)
“The star of JUSTICE LEAGUE DARK and HELLBLAZER—the longest-running Vertigo series—is unleashed in his own DCU title! Liar, cheater, manipulator…John Constantine is all of these, and yet he uses these skills and more to protect the world from the darkest corners of the DC Universe. Collects Constantine #1-6.” (Overdrive description) 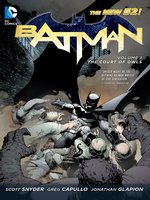 Batman, Volume 1, by Scott Snyder (eBook)
“After a series of brutal murders rocks Gotham City, Batman begins to realize that perhaps these crimes go far deeper than appearances suggest. As the Caped Crusader begins to unravel this deadly mystery, he discovers a conspiracy going back to the origins of the city he’s sworn to protect. Could the Court of Owls, once thought to be nothing more than an urban legend, be behind the crime and corruption? Or is Bruce Wayne losing his grip on sanity.” (Adapted from Overdrive description) 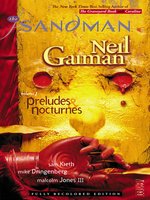 The Sandman, Volume 1, by Neil Gaiman (eBook)
“NEW YORK TIMES bestselling author Neil Gaiman’s transcendent series SANDMAN is often hailed as the definitive Vertigo title and one of the finest achievements in graphic storytelling. Gaiman created an unforgettable tale of the forces that exist beyond life and death by weaving ancient mythology, folklore and fairy tales with his own distinct narrative vision. In PRELUDES & NOCTURNES, an occultist attempting to capture Death to bargain for eternal life traps her younger brother Dream instead. Collects issues #1-8.” (Adapted from Overdrive description) 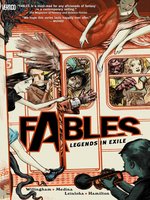 Fables, Volume 1, by Bill Willingham (eBook)
“WINNER OF FOURTEEN EISNER AWARDS When a savage creature known only as the Adversary conquered the fabled lands of legends and fairy tales, all of the infamous inhabitants of folklore were forced into exile. Disguised among the normal citizens of modern-day New York, these magical characters have created their own peaceful and secret society within an exclusive luxury apartment building called Fabletown. But when Snow White’s party-girl sister, Rose Red, is apparently murdered, it is up to Fabletown’s sheriff, a reformed and pardoned Big Bad Wolf, to determine if the killer is Bluebeard, Rose’s ex-lover and notorious wife killer, or Jack, her current live-in boyfriend and former beanstalk-climber. Collects FABLES #1-5.” (Overdrive description)