Another exciting line-up for new books on popular music includes the fantastic biography of Nina Simone and The Faces. A Freewheelin’ Time tells intriguing backstory about the folk movement in the 60s and Woodstock which contains marvellous photographs by Baron Wolman is simply unmissable. Check them out!

What happened, Miss Simone? : a biography / Alan Light.
“Inspired by the Academy Award-nominated Netflix documentary What Happened, Miss Simone? , an intimate and vivid look at the legendary life of Nina Simone, the classically trained pianist who evolved into a chart-topping chanteuse and committed civil rights activist. From music journalist and former Spin and Vibe editor-in-chief Alan Light comes a biography of incandescent soul singer and Black Power icon Nina Simone, one of the most influential, provocative, and least understood artists of our time. Harnessing the singular voice of Miss Simone herself and incorporating candid reflections from those who knew her best, including her only daughter, Light brings us face to face with a legend, examining the very public persona and very private struggles of one of our greatest artists.” (Syndetics summary)

Cobain on Cobain : interviews and encounters / edited by Nick Soulsby.
“Cobain on Cobain places the reader at the key moments of Kurt Cobain’s roller-coaster career, telling the tale of Nirvana entirely through his words and those of his bandmates. Each interview is another knot in a thread running from just after the recording of their first album, Bleach, to the band’s collapse on the European tour of 1994 and Cobain’s subsequent suicide. Including many interviews that have never before seen print, Cobain on Cobain will long remain the definitive source for anyone searching for Kurt Cobain’s version of his own story.” (Syndetics summary)

Had me a real good time : Faces : before, during and after / Andy Neill.
“Forty years ago one of the world’s best-loved rock ‘n’ roll bands, The Faces, formed from the ashes of The Small Faces and the Jeff Beck Group, featuring a charismatic, raspy-voiced frontman in Rod Stewart alongside Ron Wood, Ronnie Lane, Ian McLagan and Kenney Jones. They offered a welcome antidote to the more serious excesses of the early seventies, being as devoted to the mayhem as they were to the music. This is their story…” (Syndetics summary)

Edith Piaf : find me a new way to die : the untold story / David Bret.
“Published to mark the centenary of Edith Piaf’s birth, this biography contains new and shocking revelations about Piaf, drawn from exclusive interviews with those who knew her best–friends, lovers, colleagues, and songwriters. This new book will mean a significant revision to the Piaf myth.” (Syndetics summary)

A freewheelin’ time : a memoir of Greenwich Village in the sixties / Suze Rotolo.
“Suze Rotolo reflects on her experiences in Greenwich Village during the 1960s, focusing on the growing popularity of folk music in the area and her relationship with Bob Dylan.” (Syndetics summary)

Soul serenade : rhythm, blues & coming of age through vinyl : a memoir / Rashod Ollison.
“A coming-of-age memoir about a young boy in rural Arkansas who searches for himself and his distant father through soul music. Growing up in rural Arkansas, young Rashod Ollison turned to music to make sense of his life. The dysfunction, sadness, and steely resilience of his family and neighbors was reflected in the R&B songs that played on 45s in smoky rooms. Steeped in the sounds, the smells, the salty language of rural Arkansas in the 1980s, Soul Serenade is an original and captivating coming-of-age story set to an original beat.” (Adapted from Syndetics summary)

British black gospel : the foundations of this vibrant UK sound / Steve Alexander Smith ; foreward by Noel Robinson.
“From the roots and pioneers to today’s young talent, the story of a spiritual hunger expressed in fine music.” (Syndetics summary)

Eyes wide open : true tales of a Wishbone Ash warrior / Andy Powell with Colin Harper.
“In 1969, Andy Powell was one of four founding members of progressive rock pioneers Wishbone Ash. Forty-five years later, with no sabbaticals, he is still a member of Wishbone Ash. And he has seen a lot of interesting things along the way. Honest, unpretentious, and often wryly amusing, it draws on half a century of mingling with the great and the good–not to mention the occasional nutcase. It’s a book that will appeal strongly to fans of Wishbone Ash but also to anybody with even a passing interest in classic rock of the 70s and beyond.” (Syndetics summary)

Calvin Harris : the $100 million DJ : the unauthorised biography / Douglas Wight.
“He’s worth $100 million, is the richest DJ in the world and has worked with all of the top names in pop. But just who is Calvin Harris?” (Syndetics summary) 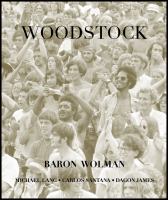 Woodstock / photographs by Baron Wolman ; with Michael Lang ; foreword by Carlos Santana ; edited by Dagon James.
“Baron Wolman’s evocative and stunning photographs of Woodstock are published here for the first time. Wolman captured the atmosphere of Woodstock like no other photographer. More interested in the crowd than the performers, his photographs are hugely evocative and offer an insight into this legendary event that is rarely seen. Wolman writes, ‘everything was totally different, the behaviour was new and unexpected.’ With interview with Woodstock creator, Michael Lang, and a foreword by musician Carlos Santana, this exceptional volume is not to be missed.” (Syndetics summary)