Lots of animals from worms to bears to charm your socks off. 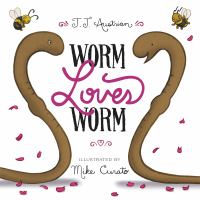 Worm loves Worm / J.J. Austrian ; Mike Curato.
“Worm and Worm love each other and want to get married. They’ll need a best beetle, bride’s bees, a white dress, a tuxedo, and so on. None of that stuff matters to Worm and Worm, but they’re agreeable. They’ll wear rings like belts (they don’t have fingers) and get cake for their friends, even though they only eat dirt. When asked who’s the bride and who’s the groom, however, they’re firm: We can be both. Cricket objects, since that’s not how it’s done, and the worms cheerfully reply, Then we’ll just change how it’s done. This timely title is a warm and easy way to introduce the idea of same-sex marriage to children.” (Adapted from Booklist) 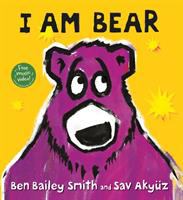 I am bear / Ben Bailey Smith and Sav Akyüz.
“”I am Bear./And I am bare./The suit I wear has purple hair.” After he zips up and strikes a pose, Bear shows off a little more for his readers by strutting about and antagonizing all the minor characters-especially that squirrel who mocked his nakedness. He eats the bees’ honey, tells a knock-knock joke at the squirrel’s expense, performs some questionable magic tricks, and shows readers his favorite game, “cops and robbers,” where he eats all of a police officer’s doughnuts. (The squirrel gets the blame.)” (Adapted from School Library Journal) 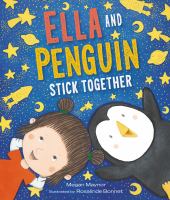 Ella and Penguin stick together / by Megan Maynor ; illustrated by Rosalinde Bonnet.
“Ella has just received a sheet of glow-in-the-dark stickers, and she’s eager to share them with her friend Penguin. But the only way to appreciate their radiance is to go deep into the hallway closet-and while Ella is a little hesitant, Penguin breaks out in a sweat when he even thinks of the dark. Maybe, he suggests, “the stickers will glow somewhere else-somewhere mostly dark.” When Ella and Penguin finally screw their courage to the sticking place and enter the closet, the unleashed glowing is a payoff worth waiting for. Ages 4-8. ” (adapted from Publisher Weekly) 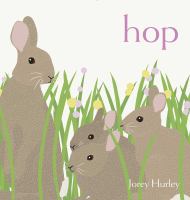 Hop / Jorey Hurley.
“Mother rabbit leads her young out of a tree hollow to snack and play in a meadow. They avoid predators, hide in a borrowed burrow to wait out the rain, and head back out to graze. All is conveyed simply through single-word spreads. Flat, graphic-style illustrations are done primarily in greens and browns with splashes of spring colors in the flowers.” (School Library Journal) 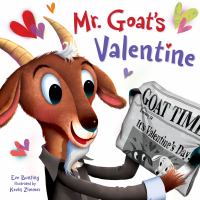 Mr. Goat’s valentine / by Eve Bunting and illustrated by Kevin Zimmer.
“Apparently in the goat world, typical Valentine’s Day offerings are not chocolates and fragrant flower arrangements in lovely vases, but rather rotten eggs (the older the better) and weeds in cans (the rustier the better). Mr. Goat is on the search for a valentine for his first love and picks items he thinks will be just right: two-year-old eggs and a bouquet of crabgrass, pigweed, and ragweed. His first love turns out to be his mother, and, of course, she is delighted with the gifts. While the goats are entranced by the rotten eggs, the audience’s response to the sight of green eggs oozing a black liquid, complete with wavy stink lines, will probably be loud ewws which makes this all the more fun!” (Adapted from Booklist)

The bear’s surprise / Benjamin Chaud.
“Baby Bear awakes on a Spring day and finds Papa missing. He sets off searching for him through the forest, into a cave, through a set of pipes, and up to the entrance of a circus tent, where it turns out that Papa is performing high-flying feats of daring. Naturally, Baby Bear joins in and sails into the air only to land on Mama. And what’s that Mama is holding in her lap? Welcome, Teeny Tiny Bear! In this third installment of Baby Bear’s adventures, the fun is enhanced by die-cuts in an assortment of shapes. Familiarity with the previous books is not essential, but it won’t hurt, either.” (Adapted from School Library Journal) 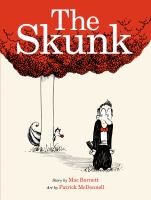 The skunk / story by Mac Barnett ; art by Patrick McDonnell.
A skunk mysteriously appears on a man’s doorstep and follows him – until the man turns the tables and follows the skunk.