A lot of fascinating studies have been added to our collection of books on popular music. They include Vinyl : the art of making records (history and current trends of vinyl records) and The song machine (an interesting insight into making hit songs). As always, biographies, including about Grateful Dead and Ronnie Wood offer great reads. Check them out! 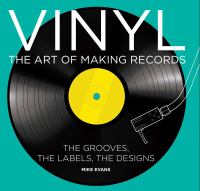 Vinyl : the art of making records / Mike Evans.
“In our increasingly digital world, audiophiles know that the real recording is on vinyl. That’s why sales of vinyl continue to soar. Mike Evans offers a sumptuous visual celebration of this medium’s fascinating history and triumphant rebirth. From weighty 78s to feisty 45s, from eccentric EPs to legendary LPs, he brings vinyl recordings off the shelves and out of the crates.” (Syndetics summary) 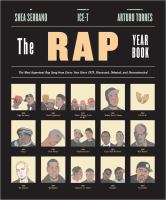 The rap year book : the most important rap song from every year since 1979, discussed, debated, and deconstructed / by Shea Serrano ; foreword by Ice-T ; illustrated by Arturo Torres.
“The Rap Year Book takes readers on a journey that begins in 1979, widely regarded as the moment rap became recognized as part of the cultural and musical landscape, and comes right up to the present. Shea Serrano deftly pays homage to the most important song of each year. The Rap Year Book is both a narrative and illustrated guide to the most iconic and influential rap songs ever created.” (Syndetics summary) 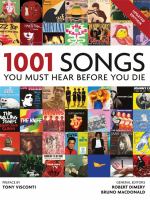 1001 songs you must hear before you die / general editor, Robert Dimery ; preface by Tony Visconti.
“From Tin Pan Alley to the Brill Building, Bob Dylan to Kurt Cobain, and Joni Mitchell to Amy Winehouse, gifted songwriters have crafted a cherished body of music that has become part of our lives. 1001 Songs You Must Hear Before You Die picks through nearly a century of music to bring you an inspiring selection of some of the greatest recordings ever made.” (Syndetics summary)

The song machine : inside the hit factory / John Seabrook.Proxy Error
“There’s a reason hit songs offer such guilty pleasure–they’re designed that way. Over the last two decades a new type of hit song has emerged, one that is almost inescapably catchy. Pop songs have always had a “hook,” but today’s songs bristle with them: a hook every seven seconds is the rule. Painstakingly crafted to tweak the brain’s delight in melody, rhythm, and repetition, these songs are highly processed products. Going beyond music to discuss money, business, marketing, and technology, The Song Machine explores what the new hits may be doing to our brains and listening habits, especially as services like Spotify and Apple Music use streaming data to gather music into new genres invented by algorithms based on listener behavior.” (Adapted from book jacket)

Magical musical tour : rock and pop in film soundtracks / K.J. Donnelly.
“The popular music industry has become completely interlinked with the film industry. The majority of mainstream films come with ready-attached songs that may or may not appear in the film but nevertheless will be used for publicity purposes and appear on a soundtrack album. In many cases, popular music in films has made for some of the most striking moments in films and the most dramatic aesthetic action in cinema. Kevin Donnelly explores the history of the intimate bond between film and music, from the upheaval that rock’n’roll caused in the mid-1950s to the more technical aspects regarding ‘tracking’ and ‘scoring’.” (Syndetics summary)

Jazz / John Fordham.
“The jazz paradox: why has an art that has so transformed the world’s music in barely 100 years, remained so widely misunderstood? This book shines light on the subject for those intrigued by its influence and creativity, but also mystified by its occasionally esoteric habits.” (Syndetics summary) 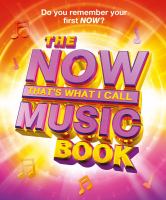 The bag I’m in : underground music and fashion in Britain 1960-1990 / Sam Knee ; with a foreword by Bobby Gillespie.
“Youth subculture in twentieth-century Britain was a unique phenomenon. Throughout the decades, young people sought to define themselves sartorially, reflecting their identity in terms of regionalism, class and crucially, musical taste, through their clothes. This book is a comprehensive survey of forty-five “tribes” that roamed the streets of Britain from the ’60s to the ’90s. From Mod to Skinhead and Rocker to Rudeboy, the look of each movement is captured in meticulously researched, previously unpublished archive photography. Explanatory texts by Sam Knee as well as an illustrated “look-book” appendix make this an important resource for fashion students, musos and cultural historians.” (Syndetics summary)

The B side : the death of Tin Pan Alley and the rebirth of the great American song / Ben Yagoda.Proxy Error
“Everybody knows and loves the American Songbook. But it’s a bit less widely understood that in about 1950, this stream of great songs more or less dried up. All of a sudden, what came over the radio wasn’t Gershwin, Porter, and Berlin, but “Come on-a My House” and “How Much Is That Doggie in the Window?” Elvis and rock and roll arrived a few years later, and at that point the game was truly up. What happened, and why? In The B Side, acclaimed cultural historian Ben Yagoda answers those questions in a fascinating piece of detective work.” (adapted from publisher’s web site)

This is all a dream we dreamed : an oral history of the Grateful Dead / Blair Jackson and David Gans.
“In This Is All a Dream We Dreamed , two of the most well-respected chroniclers of the Dead, Blair Jackson and David Gans, reveal the bands story through the words of its members, their creative collaborators and peers, and a number of diverse fans, stitching together a multitude of voices into a seamless oral tapestry. You’ll hear stories you haven’t heard before, possibly from voices that may be unfamiliar to you, and the tales that unfold will shed a whole new light on a long and inspiring musical odyssey.” (Syndetics summary)

How can it be? : a rock & roll diary / Ronnie Wood ; foreword by Charlie Watts.
“Before he was a Rolling Stone, a Face, or a member of the Jeff Beck Group, Ronnie Wood flew the nest aged just 17 with his first band, the Birds. Featuring cameos by legends such as Eric Clapton, Jimmy Page, Rod Stewart and Pete Townshend, Ronnie’s adventures on the road to superstardom were handwritten in his private diary of 1965. Now, celebrating 50 years in rock ‘n’ roll, Ronnie Wood guides us through the pages of his rediscovered journal. With his entertaining new commentary, hand-drawn illustrations, and rare photos and memorabilia, Ronnie’s trip through the Sixties is introduced by his Stones bandmate Charlie Watts. A download code for Ronnie’s accompanying ‘How Can It Be?’ single is included. ‘A chance to witness music history.’ – The Sunday Times” (Syndetics summary) 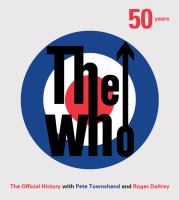 Sugar man : the life, death and resurrection of Sixto Rodriguez / Craig Bartholomew Strydom and Stephen ‘Sugar’ Segerman.
“In the summer of 1972, during a compulsory stint in the South African military, Stephen ‘Sugar’ Segerman heard the music that would forever change his life. A decade later, on yet another military base, Craig Bartholomew Strydom heard the same music. It would have a profound effect. Who was this folk singer who resonated with South Africa’s youth? No one could say. All that anyone knew was his name — Rodriguez — and the fact that he had killed himself on stage after reading his own epitaph. After many years of searching in a pre-internet age, Strydom with support from Segerman found the musician not dead but alive and living in seclusion in Detroit. Even more remarkable was the fact that Rodriguez, no longer working as a musician and struggling to eke out a blue-collar existence, had no idea that he had been famous for over 25 years in a remote part of the world.” (Syndetics summary) 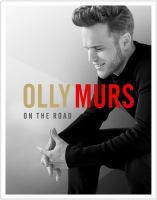 Olly Murs : on the road / words by Matt Allen.
“Go backstage with Olly Murs. This official, illustrated book is filled with hundreds of exclusive pictures and tales from behind the scenes of life on the road. This book will show a side to Olly that we have not seen before and provides an in-depth and intimate portrait of one of the UK’s biggest artists filled with intellegence, honesty and humour. With exclusive uncensored access, we learn how Olly copes with being on tour: the preparation, how he deals with the pressure to perform, what it is like being away from his family and friends, how he manages his nerves and lots more. A must for all of Olly’s fans, On The Road is fly-on-the-wall look at his time on the road, and taking you closer to Olly than ever before.” (Syndetics summary)