Rock legends always have stories to tell. New books on popular music this month feature fascinating real stories about incredible artists such as The Pretenders’ Chrissie Hynde, the one-of-a-kind artist Robert Wyatt and Kanye West. Amy Winehouse is the latest musician who joined the infamous ‘27 club’, named after the fact that many superstars (Jimi Hendrix, Jim Morrison. Kurt Cobain etc.) died at the age of 27, and Dead god$: the 27 club offers a unique read. There are a lot more. Check them out!

Reckless : my life as a Pretender / Chrissie Hynde
“Chrissie Hynde, for nearly four decades the singer/songwriter/ undisputed leader of the Pretenders, is a justly legendary figure. Few other rock stars have managed to combine her swagger, sexiness, stage presence, knack for putting words to music, gorgeous voice and just all-around kick-assedness into such a potent and alluring package. Now, in her no-holds-barred memoir Reckless, Chrissie Hynde tells, with all the fearless candor, sharp humor and depth of feeling we’ve come to expect, exactly where she came from and what her crooked, winding path to stardom entailed. Her mesmerizing presence radiates from every line and page of this book.” (Syndetics summary)

Different every time : the authorised biography of Robert Wyatt / Marcus O’Dair.
“Robert Wyatt started out as the drummer and singer for Soft Machine, who shared a residency at Middle Earth with Pink Floyd and toured America with Jimi Hendrix. He brought a Bohemian and jazz outlook to the 60s rock scene, having honed his drumming skills in a shed at the end of Robert Graves’ garden in Mallorca. His life took an abrupt turn after he fell from a fourth-floor window at a party and was paralysed from the waist down. He reinvented himself as a singer and composer with the extraordinary album ‘Rock Bottom’, and in the early eighties his solo work was increasingly political. Today, Wyatt remains perennially hip, guesting with artists such as Bjork, Brian Eno, Scritti Politti, David Gilmour and Hot Chip. Marcus O’Dair has talked to all of them, indeed to just about everyone who has shaped, or been shaped by, Wyatt over five decades of music history.” (Syndetics summary)

Kanye West : god & monster / Mark Beaumont.
“Featuring quotes from all of the major players in Kanye’s life, Kanye West: God And Monster traces his life from the suburbs of Chicago through art school and rap apprenticeships to recording in the coolest studios of New York and Hawaii with the biggest names in music, revolutionising hip-hop at every step of the way. It documents every rumour and revelation, details the wildest extravagances and biggest ego blow-ups of this true rap original. Exploring his life, music and controversies like never before, Kanye West: God And Monster is the ultimate profile of this legendary pop culture titan.” (Syndetics summary)

In search of Pharrell Williams / Paul Lester.
“First substantial overview of the life and career of Pharrell Williams, the foremost producer of the modern era, and performer in his own right. It follows him from his days growing up in Virginia, his meeting with musical partner Chad Hugo and formation of The Neptunes, through his collaborations with the great and the good of pop, rap and R&B, including Jay-Z, Britney Spears, Justin Timberlake, Usher, Snoop Dogg, Gwen Stefani, Nelly and Kelis. It assesses his ground-breaking work with the radical rap-rock-pop band N*E*R*D, and his emergence as a solo superstar. It delves behind the immaculate facade to find out what makes Williams one of the most driven and inventive musicians of the last 20 years.” (Syndetics summary)

Tragedy : the sad ballad of the Gibb brothers / Jeff Apter.
“The rise and fall of the brothers Gibb is perhaps the greatest saga in Australian, even world, music history. As ubiquitous as the falsetto harmonies, flares and multi-platinum record sales were the tragedies: the highs, the lows, the highs again. And then the brothers fell, one by one. Not long before his death, Robin made it clear that he believed the Gibbs had been forced to pay the highest possible cost for their success. ‘All the tragedies my family has suffered . . . is a kind of karmic price we are paying for all the fame and fortune we’ve had.’ This is the story of all four brothers’ incredible careers, lives and influence.” (Syndetics summary)

Dead god$ : the 27 club / Chris Salewicz.
“Robert Johnson. Brian Jones. Jimi Hendrix. Janis Joplin. Jim Morrison. Kurt Cobain. Amy Winehouse. They were inspirational, controversial, talismanic and innovative. They lead lives full of myth, scandal, sex, drugs and some of the most glorious music that has ever heard. Though each of their lives were cut tragically short at the age of 27, they would all leave the world having changed it irrevocably. Chris Salewicz tells, in intimate detail, the stories behind these compelling figures.” (Syndetics summary)

Down under / Trevor Conomy.
“‘Down Under’ made Men at Work the biggest band on the planet in the early 1980s. The band split soon after, but ‘Down Under’ never stopped working. It became an unofficial national anthem, and was as unstoppable as the fried-out Kombi of its opening line. Decades later, ABC’s Spicks and Specks innocently revealed a similarity between the song’s flute riff and an old nursery rhyme about a laughing Kookaburra. It sparked an epic legal stoush that shook the music world and will forever be associated with tragedy.” (Syndetics summary) 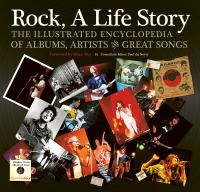 Rock, a life story : the illustrated encyclopedia of albums, artists and great songs / foreword by Brian May.
“This is the ultimate story of a life of rock music, from the 1950s to the present day. Rock is the enduring sound of music, once just the preserve of the rebellious young, now the rock gods of the 60s and 70s are still playing, to both their old audiences and new generations of avid fans. Divided into eras, from Roots, through the Sixties and Seventies to the Noughties, learn about the development of rock, the key artists, albums, inspirations and legacies. This brilliant new book offers a glorious slice of rock, the story of our lives, for fans of The Who, The Sex Pistols, Led Zep, Muse, Radiohead, Jack White and more.” (Syndetics summary) 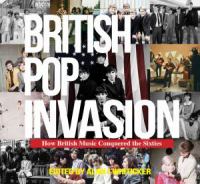 British pop invasion : how British music conquered the world in the 1960s / edited by Alan J. Whiticker.
“The Beatles paved the way for countless British bands and performers to find international success during the 1960s, taking the US charts by storm and charming a generation of baby boomers in the process. The British Pop Invasion is a photographic record of that era using hundreds of rare Daily Mirror images, many of them unpublished or locked away for decades, in a hardcover book. At more than 300 pages, this book is a must for baby boomers of the period, music lovers of any age and pop culture historians.” (Syndetics summary)

Louder than hell : the definitive oral history of metal / Jon Wiederhorn & Katherine Turman.
“Louder Than Hell is the definitive oral history of heavy metal, crafted from more than four hundred interviews with icons of the genre from its inception to today, including Ozzy Osbourne, Eddie Van Halen, Tommy Lee, Lars Ulrich, Vince Neil, Axl Rose, Corey Taylor, Dave Grohl, Trent Reznor, Marilyn Manson, Rob Zombie, and Dimebag Darrell. From groundbreaking innovations such as the dawn of distortion and the birth of cookie monster vocals to amazing tales of destruction and wild sexcapades, Louder Than Hell is packed with raw, unflinching stories, eye-opening admissions, and the truth behind some of metal’s wildest moments.” (Syndetics summary)

It’s one for the money : the song snatchers who carved up a century of pop & sparked a musical revolution / Clinton Heylin.
“A cross between Hollywood Babylon and The Hitmen, It’s One For The Money rips the lid off Pop’s own Pandora box and explicates just what it is that makes the world of sound go round in song publishing.” (Syndetics summary)