This month’s new books are quite experimental with topics ranging from how to make the design process more playful, to unconventional libraries, and the very unconventional cardboard cathedral in Christchurch. Try something new from this month’s picks!

Tiny house floor plans : over 200 interior designs for tiny houses / by Michael Janzen.
“Inside Tiny House Floor Plans you’ll find over 200 interior designs for tiny houses – 230 to be exact. A tiny house is exactly what it sounds like, a house with many of the amenities you’d expect in a home tucked neatly into a super small space. Often these homes are built on trailers giving them the added benefit of mobility. But these designs could also be built on your choice of foundation. Each chapter focuses on one size footprint to show what can be done inside each size space. If you’re considering simplifying your life, extreme downsizing, arranging your tiny apartment more efficiently, building a cabin or inlaw unit, and/or building your own mortgage-free tiny home, this book can help give you a head start on making your goals a reality.” (Syndetics summary) 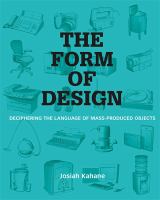 The form of design : deciphering the language of mass-produced objects / Josiah Kahane.
“This is the first all-encompassing book about the visual language of man-made products, explaining how mass-produced objects evolve over time and what made them change. Form evolution behaves in a similar way to language evolution and, to some extent, even to natural evolution. In the book the author materializes the governing rules of form evolution by means of fourteen case studies.” (Syndetics summary)

Ettore Sottsass and the poetry of things / Deyan Sudjic.
“Sottsass (1917-2007), originally trained as an architect and worked as a design consultant for Olivetti, where he developed the iconic Valentine typewriter, before going on to found the Memphis Group in the 1980s, ushering in an era of influential designs in furniture, ceramics and lighting. Though a native son of Italy, Sottsass cast a shadow of influence on the entire world, traveling extensively over the course of his life and interacting with some of the 20th century’s most iconic figures, including Picasso, Hemingway and Allen Ginsberg. …a unique and comprehensive portrait not only Sottsass but of the last 100 years of design in Italy and around the world.” (Adapted from Syndetics summary) 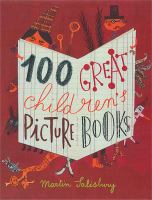 100 great children’s picturebooks / Martin Salisbury.
“This unashamed visual feast celebrates the best designed and illustrated picturebooks from around the world over the past one hundred years. Each book is a creation of genius and inventiveness, and their design and illustration represent such diverse trends as the Russian Constructivists, Italian Futurists, and Postwar Neo-romantics. They are also mirrors of their times reflecting social concerns from a child’s and family’s perspectives throughout the twentieth and into the twenty-first century. Fearlessly confronting the frontiers between a child’s picturebook and art, this is a collection of books that anyone with an interest in design, illustration, or simply children’s literature should know about.” (Syndetics summary) 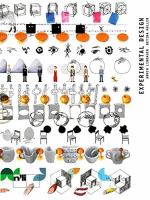 Experimental design : visual methods and systematic play / [edited by] Armin Lindauer, Betina Müller ; texts: Armin Lindauer.
“How can experimentation and methodology be used in design processes? In this area of specialization in particular the term “experimental” is often used rather randomly. Contrary to this approach, this book shows that even in art and design methodical experiments can result in concepts and ideas, i.e. creativity in the widest sense. The varied and often surprising results are due not least to the many different applied methods. The works were found in very diverse sectors such as advertising, product design, poster design, art, and sciences. With its more than 3000 images, Experimental Design is a visual reference book for anyone interested in methodical approaches to ideas and concepts.” (Syndetics summary)

The dream café : lessons in the art of radical innovation / Duncan D. Bruce and Dr. Geoff Crook.
“To keep your brand innovative you need to feed your creative spirit and the office is not the place to do that. So get out, disrupt and reimagine the status quo, get into a café and dream. Recreating the convivial, collaborative, creative world of the avant-garde the guys at The Dream Café have developed a fresh, new approach which is being used by major brands and businesses to great success. They create actual Dream Café locations settings which encourage freedom of thought and collaboration. Now, for the first time, the innovation consultants at The Dream Café have made their model and methods available to us all in this exciting new book.” (Syndetics summary) 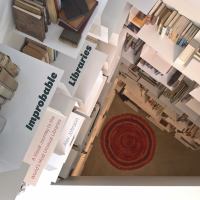 Improbable libraries : a visual journey to the world’s most unusual libraries / Alex Johnson.
“Public libraries are a cornerstone of modern civilization, yet like the books in them, libraries face an uncertain future in an increasingly digital world. Improbable Libraries showcases a wide range of unforgettable, never-before-seen images and interviews with librarians who are overcoming geographic, economic, and political difficulties to bring the written word to an eager audience. Alex Johnson charts the changing face of library architecture, as temporary pop-ups rub shoulders with monumental brick-and-mortar structures, and many libraries expand their mission to function as true community centers.” (Syndetics summary)

Shigeru Ban : cardboard cathedral / Andrew Barrie ; photographs by Bridgit Anderson & Stephen Goodenough.
“In Christchurch’s inner city an innovative and symbolic structure has just taken shape: a cardboard cathedral to stand in for the historic building devastated by the earthquakes of September 2010 and February 2011. Signaling the beginnings of renewal in the central business district, the cathedral is the first new civic building completed since the quakes. Shigeru Ban, its designer, is a world-class architect and expert in disaster-zone building; and the new transitional cathedral is his largest postdisaster structure to date. In essays, building plans, and specially commissioned photography, Shigeru Ban: Cardboard Cathedral tells the story of this remarkable feat. Originally conceived as a temporary building, its construction involved design challenges, structural innovations, and community involvement. This is vital reading for anyone interested in contemporary architecture and for all those looking to what the future might hold for cities after disaster.” (Syndetics summary)

View all posts by Rachel