From fantastic photography of pre-famous Bob Dylan to fascinating memoirs by Ringo Starr and John Lydon, to handy guitar instruction books, new books on popular music, once again, offer a great read. Have a browse!

Bob Dylan : NYC 1961-1964 / photography by Ted Russell with Chris Murray ; foreword by Donovan.
“It was in late 1961, photographer Ted Russell recalls, that he first heard about an “up-and-coming young fellow who was coming out with his first album.” A freelance photographer on the lookout for good subjects, Russell was intrigued by a rave review from The New York Times of the raw-voiced folk singer. Russell’s subject was a twenty-year-old Bob Dylan, a young folk singer whom nobody knew, and Russell photographed Dylan in 1961. The book contains photos of Dylan in his tiny Greenwich Village apartment, writing and practicing; snuggling with girlfriend Suze Rotolo; and performing at celebrated folk club Gerde’s.” (adapted from amazon.com)

Ringo : with a little help / Michael Seth Starr.
“With a Little Help is the first in-depth biography of Beatles drummer Ringo Starr, who kept the beat for an entire generation and who remains a rock icon over fifty years since the Beatles took the world by storm. With a Little Help traces the entire arc of Ringo’s remarkable life and career, from his sickly childhood to his life as The World’s Most Famous drummer to his triumphs, addictions, and emotional battles following the breakup of the Beatles as he comes to terms with his legacy.” (Syndetics summary)

Anger is an energy : my life uncensored / John Lydon with Andrew Perry.
“John Lydon has secured prime position as one of the most recognizable icons in the annals of music history. As Johnny Rotten, he was the lead singer of the Sex Pistols – the world’s most notorious band. With his next band, Public Image Ltd (PiL) Lydon expressed an equally urgent impulse in his make-up – the constant need to reinvent himself, to keep moving. From their beginnings in 1978 he set the groundbreaking template for a band that continues to challenge and thrive in the 2010s. The book will be a fresh and mature look back on a life full of incident from his beginnings as a sickly child of immigrant Irish parents who grew up in post-war London, to his present status as a vibrant, alternative national hero.” (Syndetics summary)

After the dance : my life with Marvin Gaye / Jan Gaye with David Ritz.
“A riveting cautionary tale about the ecstasy and dangers of loving Marvin Gaye, a performer passionately pursued by all—and a searing memoir of drugs, sex, and old school R&B from the wife of legendary soul icon Marvin Gaye. Primarily silent since Marvin’s tragic death in 1984, Jan at last opens up, sharing the moving, fervently charged story of one of music history’s most fabled marriages. Unsparing in its honesty and insight, illustrated with sixteen pages of black-and-white photos, After the Dance reveals what it’s like to be in love with a creative genius who transformed popular culture and whose artistry continues to be celebrated today.” (adapted from amazon.com)

Confessions of a heretic / Adam Nergal Darski with Mark Eglinton and Krzysztof Azarewicz & Piotr Weltrowski ; foreword by D. Randall Blythe (Lamb of God).
““Rebellion is a part of youth. Sometimes it’s dangerous. Instead of a sword, I hold a guitar in my hands. I’m in the same, rigid world but instead of Molotov cocktails, I’ve got a computer. It’s a much more powerful weapon.”
Confessions Of A Heretic is the forthright and erudite memoir of the front man and driving force behind the Polish heavy-metal group Behemoth, currently at the top of their game following the release of their 2014 US Top 40 album “The Satanist”. Presented as a series of interrogations by friends and associates, the book reveals a complex man of great contrast–a health-conscious, highly personable intellectual known for his extreme views and even more extreme music.” (Syndetics summary)

Your band sucks : what I saw at indie rock’s failed revolution (but can no longer hear) / Jon Fine.
“Jon Fine spent nearly thirty years performing and recording with bands that played various forms of aggressive and challenging underground rock music, and, as he writes in this memoir, at no point were any of those bands “ever threatened, even distantly, by actual fame.” In it, Fine tracks how the indie-rock underground emerged and evolved, how it grappled with the mainstream and vice versa, and how it led many bands to an odd rebirth in the 21st Century in which they reunited, briefly and bittersweetly, after being broken up for decades. Like Patti Smith’s Just Kids, Your Band Sucks is a unique evocation of a particular aesthetic moment.” (Syndetics summary)

X (songbook)/ Ed Sheeran.
“The sophomore album from this Grammy Award-nominated British singer shot to #1 on the Billboard 200 Album charts. Our folio features guitar arrangements of all 16 tracks from the album, including the hot single “Sing” plus: Afire Love * Bloodstream * Don’t * Even My Dad Does Sometimes * I’m a Mess * The Man * One * Photograph * Runaway * Thinking Out Loud * and more.” (adapted from amzon.com) 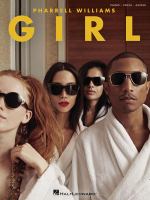 Girl / Pharrell Williams.
“(Piano/Vocal/Guitar Artist Songbook). Grammy Award winning producer and artist Pharrell released this, his second solo album, in 2014. Featuring the mega-hit “Happy” from Despicable Me 2 , the album reached as high as #2 on the Billboard 200 Album Chart. Our matching folio includes all the tracks from the CD: Brand New (featuring Justin Timberlake) * Come Get It Bae * Gush * Gust of Wind * Happy * Hunter * It Girl * Lost Queen * Marilyn Monroe * Know Who You Are (featuring Alicia Keys).” (Syndetics summary)

15 Disney vocal duets from the stage and screen : for two voices and piano accompaniment.
“(Vocal Duet). A selection of 15 original duets from classic through contemporary Disney films and Broadway stage musicals. For various voice combinations and printed in original keys. Includes: Can You Feel the Love Tonight * Feed the Birds * I See the Light * Love Is an Open Door * No Matter What * Something There * Sweet Child * A Whole New World * and more.” (Syndetics summary) 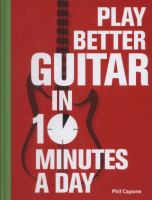 Play better guitar in ten minutes a day / Phil Capone.
“How often should I practice? And what should I work on? These are the two questions that guitar students will ask more often than anything else related to learning to play. This book provides the answers, with a set of quick and efficient workout routines for learner guitarists who want to get the most out of their practice time. It includes a unique ‘Workout Builder’ that allows readers to create their own custom-built routines for picking hand, fretting hand, fretboard fluency, or any combination of the three-at varying degrees of skill level as they progress.Pitched as the beginner guitarist’s second book, following these regular practice sessions of just 10 minutes each day will give players real improvements in a matter of just a few weeks.” (adapted from amazon.com) 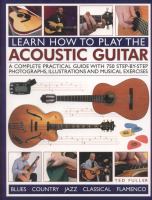 Learn how to play the acoustic guitar : a complete practical guide with 750 step-by-step photographs, illustrations and musical exercises / Ted Fuller.
“Acoustic guitars are very popular with beginners, and this book will help musicians to master the instrument, from buying the right guitar and learning the necessary chords to trying out advanced techniques. It introduces the different genres of music played using the guitar, such as blues, country, jazz, classical and flamenco, and features a helpful chordfinder to help you understand the guitarist’s basic vocabulary.With expert step-by-step instructions from professional guitarists, 300 chords and over 750 photographs and musical exercises, this comprehensive manual is a must for anyone interested in learning this universally loved instrument.” (Syndetics summary) 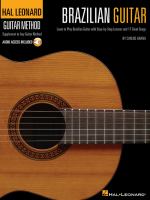 Brazilian guitar / by Carlos Arana.
“Everything you need to know to learn Brazilian guitar. This book uses popular Brazilian songs to teach you the basics of the Brazilian guitar style and technique. Learn to play in the styles of Joao Gilberto, Luiz Bonfa, Baden Powell, Dino Sete Cordas, Joao Basco, and many others. Songs include: Aquarela Brasileira * Chega De Saudade (No More Blues) * Desafinado * O Barquinho * Song of the Jet (Samba do Aviao) * and more.” (Syndetics summary) 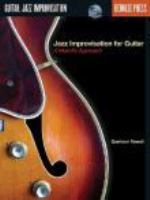 Jazz improvisation for guitar : a melodic approach / Garrison Fewell ; edited by Susan Gedutis Lindsay.
“Melodies based on triads and melodic extensions sound more natural and musical than ones developed exclusively from scales. Triads, the fundamental building blocks of harmony, are a simple and effective remedy for scale dependency in improvisation. In Jazz Improvisation for Guitar: A Melodic Approach, explore the potential of triads and their melodic extensions and learn to connect them using guide tones. You’ll learn to create solo phrases in the style of some of the world’s finest jazz guitarists like Wes Montgomery, George Benson, Grant Green, Kenny Burrell, and Pat Martino.” (Syndetics summary)