Dragons, robots, dinosaurs and monsters. There is a creature here for everyone to love. 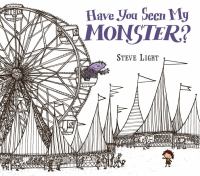 Have you seen my monster? / Steve Light.
“In a follow-up to Steve Light’s highly praised Have You Seen My Dragon?, the county fair is filled with shapes–and somewhere among them a monster is waiting to be found. A little girl gallivants through a county fair, searching for her furry friend. Readers will surely spot the friendly monster as well as twenty shapes, identified here by their proper names–trapezoids, ellipses, kites, and more–hidden among iconic fair attractions from the fun house to the Ferris wheel. Youngsters will be so mesmerized by Steve Light’s masterful pen-and-ink illustrations, decorated with vivid splashes of color, they won’t even realize they’ve learned how to spot a nonagon while looking for a monster.” (Syndetics summary) 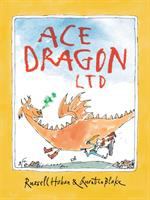 Ace Dragon Ltd. / Russell Hoban & Quentin Blake.
“From the inimitable duo of Russell Hoban and Quentin Blake, the pair behind the hilarious tales of Captain Najork, comes a story about a little boy, a fire-breathing dragon, and their sky-high adventure! “I can make fire come out of my nose and mouth,” the dragon under the pavement tells John. “I can fly. I can spin gold into straw if you have any gold.” John doesn’t have any gold – and he doesn’t need any straw. (Not yet, anyway.) The dragon tells John that if he fights the dragon and wins, the dragon will take him flying.” What a challenge! Where will it lead? John soon finds out – and he also finds out that you just never know when a bundle of straw might come in handy…With sword-flashing excitement, a moon landing and plenty of magic, this irresistible page-turner is brought back into print in a bigger format – and a beautiful, more colourful, new edition.” (Syndetics summary) 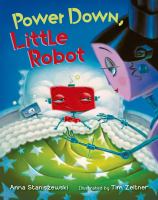 Power down, Little Robot / Anna Staniszewski ; illustrated by Tim Zeltner.
“It’s time to power down for the night, but Little Robot isn’t ready! He quickly opens his stalling program. Luckily, Mom Unit knows exactly how to get him into his sleep module. From a debut picture book author and the illustrator of Little Boo , this funny twist on a familiar nighttime routine will click with bedtime avoidance experts everywhere.” (Syndetics summary) 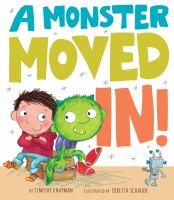 A monster moved in! / by Timothy Knapman ; illustrated by Loretta Schauer.
“It’s raining, and Ben is stuck inside with nothing to do. Then he comes up with a wonderful idea: he will build a fort! “But a monster might move in!” say Mom and Dad. After playing for a while, Ben wishes that a monster would move in. BIG MISTAKE!” (Syndetics summary) 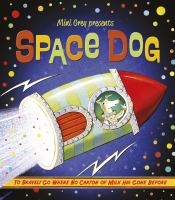 Space dog / Mini Grey.
“Spacedog’s lonely mission is nearly over, and it’s nearly time for him to go home. But one perilous rescue attempt later, and he finds himself with an Astrocat aboard his ship. But everyone knows Spacedogs and Astrocats are sworn enemiesa aren’t they? And then they encounter a Moustronaut in peril, in this intergalactic romp by awardwinner Mini Grey.” (Syndetics summary) 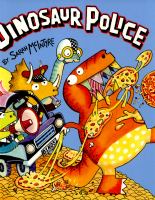 Dinosaur police / by Sarah McIntyre.
“Dinoville Police Station was having a perfectly quiet morning – until the phone rang. ‘Red alert!’ hollered Sergeant Stig O’Saurus. ‘There’s a rampaging T-Rex at the pizza factory!’ The dino police hop in their vehicles and switch on their sirens faster than you can say ‘WOO WOO!’ They try to arrest Trevor T-Rex who is gobbling pizzas meant for the town fair, but Trevor manages to escape. The walkie-talkies are out, the air squad is being called in to help – but Trevor is still on the loose . . . until the cheeky T-Rex runs through the building site and gets stuck in . . . CEMENT!” (Syndetics summary) 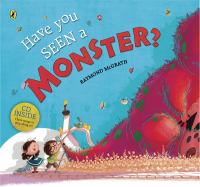 Have you seen a monster? / Raymond McGrath.
“Elliot and Emma-Jane Rose have a knack for finding things, and right now they are HOT on the trail of something very . . .B I G and very . . . H A I R Y. Elliot and Emma-Jane Rose follow the clues to something they did NOT expect – BARNABY. And luckily they know just how to help him. From the author of It’s Not a Monster, It’s ME!, this exuberant new picture book; about a monster-sized friendship also includes a bonus CD with three all-new songs performed by The Little Critters, and a read-along version of Have You Seen a Monster.” (Syndetics summary)