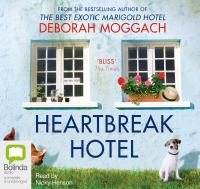 Heartbreak Hotel / Deborah Moggach.
“When retired actor Buffy decides to up sticks from London and move to rural Wales, he has no idea what he is letting himself in for. In possession of a run-down Bed and Breakfast that leans more towards the shabby than the chic and is miles from nowhere, he realizes he needs to fill the beds and fast. Enter a motley collection of guests: Harold, whose wife has run off with a younger woman; Amy, who’s been unexpectedly, dumped by her (not-so) weedy boyfriend and Andy, the hypochondriac postman whose girlfriend is much too much for him to handle. But under Buffy’s watchful eye, this disparate group of strangers discovers they have more in common than perhaps they first thought.” (Adapted from Syndetics summary)

Still Alice [sound recording] / Lisa Genova.Still Alice
“Fifty-year-old Alice Howland, a Harvard professor of cognitive psychology, is at the top of her game. Her kids are grown, her marriage secure, her career on fire when suddenly, after mere months of forgetfulness, she finds herself in the rapidly downward spiral of early onset Alzheimer’s Disease. With no cure or treatment, Alice struggles to find meaning and purpose in her everyday life as her concept of self gradually slips away, leaving her unable to work, read, take care of herself, recognize her loved ones, even understand that she has a neurodegenerative disease. Without memory or hope, she is forced to live in the moment, which is in turns beautiful, terrifying, and maddening.” (Adapted from Syndetics summary) 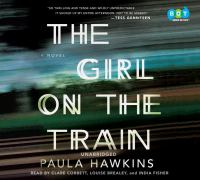 The girl on the train / Paula Hawkins.The Girl on the Train
“Rachel takes the same commuter train every morning. Every day she rattles down the track, flashes past a stretch of cozy suburban homes, and stops at the signal that allows her to daily watch the same couple breakfasting on their deck. She’s even started to feel like she knows them. “Jess and Jason,” she calls them. Their life, as she sees it, is perfect. Not unlike the life she recently lost. And then she sees something shocking. It’s only a minute until the train moves on, but it’s enough. Now everything’s changed. Unable to keep it to herself, Rachel offers what she knows to the police, and becomes inextricably entwined in what happens next, as well as in the lives of everyone involved” (Adapted from Syndetics summary)