This month’s recent history picks are big on mood and journey. Eric Foner’s unprecedented research sheds more light on the harrowing escape stories of the Underground Railroad, while Johnny Steinberg charts a refugee’s turbulent displacement across Africa. Atmospheres take on a more interiorized and reflective tone in Adam Thorpe’s On Silbury Hill and Marie Mutsuki Mockett’s complicated navigation through personal and national tragedy in Japan. These are picks for readers that want to feel transported.

My dear Bessie : a love story in letters / Chris Barker & Bessie Moore ; edited and introduced by Simon Garfield.
“Twenty hours have gone since I last wrote. I have been thinking of you. I shall think of you until I post this, and until you get it. Can you feel, as you read these words, that I am thinking of you now; aglow, alive, alert at the thought that you are in the same world, and by some strange chance loving me. In September 1943, Chris Barker was serving as a signalman in North Africa when he decided to brighten the long days of war by writing to old friends. One of these was Bessie Moore, a former work colleague. The unexpected warmth of Bessie’s reply changed their lives forever. Crossing continents and years, their funny, affectionate and intensely personal letters are a remarkable portrait of a love played out against the backdrop of the Second World War.” (Syndetics summary) 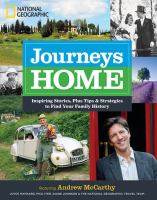 Journeys home : inspiring stories, plus tips and strategies to find your family history : featuring Andrew McCarthy, Joyce Maynard, Pico Iyer, Diane Johnson & the National Geographic travel team ; foreword by Dr. Spencer Wells, National Geographic explorer-in-residence.
“Actor and award-winning travel writer Andrew McCarthy discovers his ancestry in a compelling narrative that combines 26 intriguing and heartfelt stories about discovering home and roots with tips and recommendations on how to begin your own explorations. Sidebars and a hefty resource section provide tips and recommendations on how to go about your own research, and a foreword by the Genographic Project’s Spencer Wells sets the scene. Stunning images, along with family heirlooms, old photos, recipes, and more, round out this unique take on the genealogical research craze” (Provided by publisher) 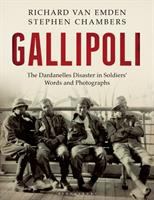 Gallipoli : the Dardanelles disaster in soldiers’ words and photographs / Richard van Emden and Stephen Chambers.
“Presenting more than 150 never-before-published photographs of the campaign, many taken by the soldiers themselves, together with unpublished written material from British, Anzac, French and Turkish, including eyewitness accounts of the landings, this is an unrivalled account of what really happened at Gallipoli. Leading First World War historian Richard van Emden and Gallipoli expert Stephen Chambers have produced an entirely fresh, personal and illuminating study of one of the Great War’s most catastrophic events.” (Syndetics summary)

The French intifada : the long war between France and its Arabs / Andrew Hussey.
“On June 14, 1830 France invaded Algiers. It was the first invasion of an Arab country since the Crusades. While the initial invasion was surprisingly simple, the years since have been full of violence and confusion between France and the neighboring Arab world in North Africa. Hussey’s (Paris: The Secret History) book is a starkly written account of the increasingly disturbing resulting relationship between the French and its Arab population that will serve as a startling and perplexing account of the state of conflict in a contemporary world.” (Publisher Weekly)

Paper love : searching for the girl my grandfather left behind / Sarah Wildman.
“Wildman takes an unexpected journey through her family’s past to piece together her grandfather’s history and uncover the fate of a young woman bound in unforeseen ways to her own life. Always believing that her grandfather had been incredibly blessed and extremely lucky to escape from Vienna and Nazi persecution on the eve of WWII, the author was surprised to discover, after her grandfather’s death, a cache of passionate letters from Valy, her grandfather’s first love. Determined to track the tragic trajectory of her grandfather’s early life a bitter chapter he repressed and glossed over for years and to retrace the harrowing odyssey of the woman he left behind, she traveled the globe in search of evidence and answers.” (Booklist)

On Silbury Hill / Adam Thorpe.
“Silbury Hill in Wiltshire, England, has inspired and perplexed people for generations. Artists and poets have fathomed their deepest thoughts searching for the hill’s hidden meanings, archaeologists have tunneled through earth for fragments that prove its purpose. But for all this endeavor, Silbury Hill remains a mystery. On Silbury Hill is Adam Thorpe’s own projection onto Silbury’s grassy slopes. Twenty years after the publication of his classic novel Ulverton, the acclaimed poet and novelist revisits the landscape that inspired him. It is a chalkland memoir, told in fragments and family snapshots, skillfully built, layer on layer, from Britain’s ancient and modern past.” (Amazon.com summary)

Where the dead pause, and the Japanese say goodbye : a journey / Marie Mutsuki Mockett.
“In her memoir, which takes place shortly after the Tohoku earthquake and tsunami in March 2011, novelist Mockett (Picking Bones from Ash) embarks on a poignant spiritual journey through Japan, seeking solace after the death of her American father three years earlier and to bury her Japanese grandfather’s bones. Touching on themes of modernity and tradition, Mockett takes part in various religious customs to come to terms with her grief and understand her mixed-cultural heritage. The author’s background as novelist is evident in her skilled descriptions of the changing seasons…with nuanced details of the nation’s struggle after the March disaster to provide an intimate snapshot of the island nation’s complex culture.” (Publisher Weekly)

Hong Kong state of mind : 37 views of a city that doesn’t blink / Jason Y. Ng.
“Hong Kong is a mixed bag of a city. It is where Mercedes outnumber taxi cabs, partygoers count down to Christmas every December 24, and larger-than-life billboards of fortune tellers and cram school tutors compete with breathtaking skylines. Hong Kong State of Mind is a collection of essays by a popular blogger who zeroes in on the city’s idiosyncrasies with deadpan precision. At once an outsider looking in and an insider looking out, Ng has created something for everyone: a travel journal for the passing visitor, a user’s manual for the wide-eyed expat, and an open diary for the native Hong Konger looking for moments of reflection.” (Syndetics sumary)

Gateway to freedom : the hidden history of the underground railroad / Eric Foner.
“In the 1850s, when so much of the commerce of New York was tied to slavery, political sentiments were not necessarily aligned with abolitionists. Still, a powerful contingent of New Yorkers, from freed slaves as much concerned about their own welfare in the face of the threat of kidnappings to more prominent citizens secretly involved in clandestine activities that mostly went undocumented for obvious reasons, worked to resist slavery. Drawing on previously untapped sources in an archive at Columbia University, Foner offers meticulous accounts of how abolitionists helped escaped slaves travel between the South to safety in upstate New York and Canada.” (Booklist)

A man of good hope / Jonny Steinberg.
“South African journalist Steinberg (Sizwe’s Test) vividly recounts one Somali man’s experience of diaspora, resulting in a book that is part biography and part contemporary history. Steinberg first met Asad Abudullahi in 2010, in the wake of the South African riots that targeted the thousands of refugees, among them Asad, drawn there by the promise of a better life. In 1991, Asad, not yet in his teens, fled the anarchy in his native country, ending up in Kenya. He honed his survival instincts in Nairobi’s slums before traveling to Ethiopia in search of members of his fractured family… When Asad eventually reached South Africa in 2004, he took on the dangerous work of running a shop in one of the country’s poorest townships… The book’s subject matter may be unfamiliar to most Americans, but Steinberg’s thoughtful approach and Asad’s attitude of droll resilience make for a tale that any reader can appreciate.” (Publisher Weekly)