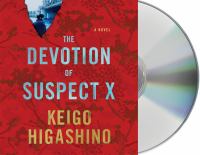 The devotion of suspect X [sound recording] : a novel / Keigo Higashino ; [translation by Alexander O. Smith]
“Yasuko lives a quiet life, working in a Tokyo bento shop, a good mother to her only child. But when her ex-husband appears at her door without warning one evening, her comfortable world is shattered. When Detective Kusanagi of the Tokyo Police tries to piece together the events of that night, he finds himself confronted by the most puzzling, mysterious circumstances he has ever investigated.”(Adapted from Book cover)

Lifetime [sound recording] / Liza Marklund ; [translation by Neil Smith].
“Police Officer Nina Hoffman finds her fellow officer David Lindholm naked on his bed with bullets through his head and stomach. Next to the body is his wife, Julia. The traumatized Julia rambles on about a woman entering the house, killing David and running off with her son, but all the evidence seems to point in Julia’s direction.” (Adapted from Syndetics summary)

Saints of the shadow bible / by Ian Rankin.
“Rebus is back on the force, albeit with a demotion and a chip on his shoulder. As a 30-year-old case is reopened, Rebus’s team from back then is suspected of foul play. His colleagues back then called themselves “The Saints”, and swore a bond on something called “the Shadow Bible”. But times have changed and the crimes of the past may not stay hidden much longer. Who are the saints and who the sinners? And can the one ever become the other?” (Adapted from Syndetics summary)