This collection of travel books begins with Harry Bucknall’s account of walking the Via Francigena. From there we go to Shane and Tim Spall’s journey around Britain in a barge, Oli Broom’s cycling trip from London to Brisbane for the Ashes… and end up with a book of great maps. Something for everyone this month!

Like a tramp, like a pilgrim : on foot, across Europe to Rome / Harry Bucknall.
“…Harry Bucknall’s book concerns a long journey on foot from St Paul’s to St Peter’s in Rome (1,300 miles). … this route, known as the Via Francigena, has been celebrated for centuries. In the tradition of Hilaire Belloc’s “The Path to Rome,” Bucknall’s writing resembles that of Christopher Howse – it is witty, erudite, spiritual and packed with incident. Unlike Belloc, who was portly and bibulous, Bucknall is young, athletic, ascetic and a former officer in the Coldstream Guards (having served in Bosnia). His journey takes him through Southwark, Canterbury, Calais, Agincourt, Reims, Lake Geneva, Valle d’Aosta, Lucca, La Foce, and the Via Cassia to Rome and the Vatican.” (adapted from Syndetics summary)

The Princess Matilda comes home : the adventure of a lifetime around Britain on a barge / Shane Spall.
“Shane and Tim Spall are on the second leg of a very big adventure, taking their Dutch barge The Princess Matilda around the coast of Britain. From Matilda’s winter berth in Cardiff, Shane and Tim follow the Welsh coast, before ambitiously deciding to visit the Isle of Man and Northern Ireland. Along the way they cross Cardigan Bay in the company of a pod of dolphins, meet the king and queen of Piel Island, get lost in shipping lanes near Liverpool, successfully cross the notorious Irish Sea (twice!), accidentally sail through an army firing range, and experience the matchless beauty of Scotland’s Caledonian canal. Emerging into the North Sea at Inverness, they set a course down the east coast for London, back where their journey began…” (adapted from Syndetics summary)

Cycling to the Ashes : a cricketing odyssey from London to Brisbane / Oli Broom.
“Oli Broom loves cricket. So much that he left his 9-to-5 in London and set off to cycle to Brisbane for the Ashes. Along the way he played cricket in the shadow of the Blue Mosque, slept in a goat pen in Sudan, dodged a five-metre crocodile in the outback, battled sub-zero temperatures in Bulgaria and successfully negotiated the treacherous highways of India.” (Book jacket)

The hunt : Singapore / [editors, Bernie Baskin, Jalean Wong].
“The HUNT Singapore takes you off the beaten tourist trail and introduces you to 85 of the most unique locally-owned eating, shopping and lifestyle experiences in this tiny island nation. We’ve burned through three pairs of shoes walking every nook of the lion city and have discovered everything from fabulous hawker crab shacks, local haute couture designers, and amazing bridges to ancient carpet sellers, bespoke men’s tailors and where to grab custom cocktails when the night descends. …Handpicked recommendations include a mix of heritage finds and old school favourites, offbeat gems and hip newcomers – the best each city has to offer whether you’re a visitor, new arrival or curious local.” (adapted from Syndetics summary)

A journey into Russia / Jens Mühling ; translated from the German by Eugene H. Hayworth.
“Ten years ago journalist Jens Mühling met Juri, a Russian television producer whose job it was to sell stories to TV stations in Germany but who always maintained that ‘The true stories are more unbelievable than anything I could invent.’ Ever since, Jens Mühling has been travelling through Russia in search of stories that appear too unbelievable to be true: a hermit from the Taiga who only recently found out that there was a world beyond the woods; a mathematician who sincerely believes a thousand years of Russian history to be a fairy tale; a priest who ventures into the exclusion zone around Chernobyl to preach to those that stubbornly remain there. Jens Mühling shows us a country whose customs, contradictions, absurdities and attractions are still largely unknown beyond its borders.” (Syndetics summary)

Southeast Asia on a shoestring / written and researched by China Williams [and 9 others].
“Lonely Planet Southeast Asia on a Shoestring is your passport to the most relevant, up-to-date advice on what to skip, what hidden discoveries await you, and how to optimise your budget for an extended continental trip. Experience the magic of the temples of Angkor at dawn, experience Asia’s colonial past in the steamy port island of Penang, or hang ten on classic Bali surf breaks; all with your trusted travel companion.” (adapted from Syndetics summary)

On the road … with kids / John Ahern.
“It’s a life-changing trip. Take it! John Ahern had a high-flying job, big house, loving wife and two great kids. But if this was success why did he sense he was failing as a husband and father? So John does something insane. He quits the corporate world and buys a busted-up campervan online to chase an improbable dream: a year travelling together as a family… on the road with kids. From the North Pole to Africa’s highest peaks, John and his family get mugged by monkeys, charmed by snake handlers, and challenged by life without phone and email. Along the way John creates a life less ordinary and evolves into a connected partner and Dad. on the road with kids is a funny, messy and inspiring adventure all families will love.” (Syndetics summary)

Last man off : a true story of disaster and survival on the Antarctic seas / Matt Lewis.
“In the depths of winter, hundreds of miles from land or rescue, a fishing boat fights for its life in swells as high as houses. For Matt Lewis, a 23-year-old British marine biologist, it had been his dream first job… But when a massive storm engulfs the boat and she falters, Lewis’s dream job turns into a nightmare. The Skipper refuses to act to save his ship, even when the crew are almost swept overboard and the hull begins to flood. When the boat’s officers disappear, and the captain suffers a heart attack, Lewis rallies the crew to escape onto three life rafts, despite being one of the most inexperienced men aboard. He is the last man off the sinking ship and his actions will save numerous lives. But the battle for survival has only just begun. With the light fading and snow falling, Lewis’s raft begins to take on water in freezing conditions. No-one knows if rescue is on its way. Thirty-eight men set out. How many will return?” (adapted from Syndetics summary) 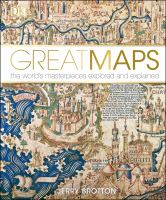 Great maps / Jerry Brotton.
“The world’s most fascinating maps explored and explained. Great Maps takes you on a journey through the history of maps, from ancient maps such as medieval mappa mundi to Google Earth. Each map provides a window into the age in which it was created and the world view at the time, as well as showing you what was known and unknown by people of the period. Great Maps includes over 55 maps from all around the world, from the first mercator atlas to the latest world maps, visually analysing each one with the help of graphic close-ups.” (adapted from Syndetics summary)