It’s mostly about about women this month including a fascinating look at those in modern Saudi Arabia from the pen of popular writer Jean Sasson. Half a world away an English noblewoman remembers her time as a Maid of Honour at the coronation of George V! …and a lot more besides. Well-known women in our own country feature strongly in the mix – Anne Else, Robin Robilliard and Elspeth Sandys have each written a memoir and each with a different twist – food, farming and adoption.
The male of the species has not been forgotten. Philip Larkin’s story has new life breathed into it by British author James Booth. Anne Sinclair tells of her grandfather’s long lost art gallery in Paris. We have a couple of good books from other parts of the library and a good one to look forward to! Happy reading!

Princess : more tears to cry / Jean Sasson.
“When Jean Sasson’s book Princess: Life Behind the Veil in Saudi Arabia was published, it became an immediate international bestseller. It sold to 43 countries and spent 13 weeks on The New York Times bestseller list. Now, in this long-awaited, compelling new book, Sasson and the Princess ‘Sultana’ return to tell the world what it means to be a Saudi woman today. Through advances in education and with access to work, Saudi women are breaking through the barriers.” (Syndetics summary)

Philip Larkin : life, art and love / James Booth.
“Philip Larkin was that rare thing among poets: a household name in his own lifetime. Lines such as ‘Never such innocence again’ and ‘Sexual intercourse began / In nineteen sixty-three’ made him one of the most popular poets of the last century. Larkin’s reputation as a man, however, has been more controversial.” (Syndetics summary).

The girl with the widow’s peak : the memoirs / Lady Ursula d’Abo ; edited by David Watkin ; foreword by John Julius Norwich.
“Born in November 1916 to the Marquess of Granby, Lady Ursula d’Abo is a sprightly and still charming lady whose memoirs of her uniquely glamorous life make riveting reading … She records life at Belvoir Castle, as maintained on a feudal scale until September 1939 … We hear of her coming-out Ball and her role in the Coronation of King George VI and Queen Elizabeth in 1937.” (Book jacket).

My grandfather’s gallery : a family memoir of art and war / Anne Sinclair ; translated from the French by Shaun Whiteside.
“A singular man in the history of modern art, betrayed by Vichy, is the subject of this riveting family memoir On September 20, 1940, one of the most famous European art dealers disembarked in New York, one of hundreds of Jewish refugees fleeing Vichy France. He left behind his beloved Paris gallery.” (Syndetics summary).

Hard country : a Golden Bay life / Robin Robilliard.
“The inspiring and entertaining story of a determined woman and an isolated farming life in Golden Bay. Robby Robilliard and her husband Garry arrived in Golden Bay in 1957. Married in their early twenties, and with a child on the way, they longed to own their own sheep station. When they bought Rocklands, a marginal farm on the fringe of the Takaka Valley, bordering Abel Tasman National Park, their dream had come true – but it wasn’t the life they had envisaged. Sixty years on, Robby and Garry still farm there.” (Syndetics summary)

The time by the sea : Aldeburgh 1955-58 / Ronald Blythe.
“The Time by the Sea is about Ronald Blythe’s life in Aldeburgh during the 1950s. He had originally come to the Suffolk coast as an aspiring young writer, but found himself drawn into Benjamin Britten’s circle and began working for the Aldeburgh Festival. Although befriended by Imogen Holst and by E M Forster, part of him remained essentially solitary, alone in the landscape while surrounded by a stormy cultural sea. This memoir gathers up many early experiences, sights and sounds.” (Syndetics summary).

Prince Harry : brother, soldier, son / Penny Junor.
“This is the Prince Harry you’ve never read about before. Published in celebration of his thirtieth birthday, this is the story behind the tabloid stories. The Prince who has the power to make or break. The maverick Prince, who is brilliant, impetuous and unpredictable. The Prince who with his unique talents, charm and bloody-minded determination is changing lives across the world. But the Prince who could, in a moment of madness, bring it all crashing down.” (Syndetics summary). 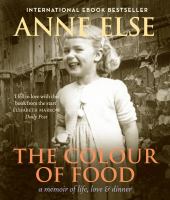 The colour of food : a memoir of life, love & dinner / Anne Else.
“Anne Else loved eating, but when she married at 19 she’d never cooked a meal. Despite a shaky start she became an enthusiastic cook – with a little help from Nancy Spain, Katharine Whitehorn, Elizabeth David and the Duchess of Windsor. In this totally captivating memoir, Else takes you inside her life, from marriage and motherhood through divorce, remarriage, and the discovery of her birth mother.” (Syndetics summary).

Two good ones in other parts of the library: 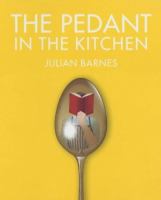 The pedant in the kitchen / Julian Barnes ; [illustrations by Joe Berger].
“This work is an elegant account of Julian Barnes’ search for gastronomic precision. It is a quest that leaves him seduced by Jane Grigson, infuriated by Nigel slater and reassured by Mrs Beeton’s Victorian virtues. For anyone who has ever been defeated by a cookbook.” (Syndetics summary).

Just between us : Australian writers tell the truth about female friendship / foreword by Helen Garner ; edited by Maya Linden, Miriam Sved, Maggie Scott, Natalie Kon-yu and Christie Nieman.
“Empathetic, supportive and respectful… Or competitive, manipulative and downright bitchy? Or somewhere in between? In Just Between Us, a host of Australia’s best-loved female writers bare all on this age-old quandary: Are female friendships all-natural and nurturing? Or are some more damaging than delightful” (Syndetics summary).

And one to look forward to!

So anyway / John Cleese.
In this rollicking memoir, Cleese takes his readers on a Grand Tour of his ascent in the entertainment world, from his humble beginnings in a sleepy English town and his early comedic days at Cambridge University (with future Python partner Graham Chapman), to the founding of the landmark comedy troupe that would propel him to worldwide renown.” (Wellington City Libraries catalogue note).
Bestseller copies of this book are now available. The regular lending copies are on order and will arrive soon. You can still place a reserve for one now.