Join us from your armchair to voyage around the world from Hebrides in the north to France (bicycling), Italy, Istanbul (walking), Goa (in luxury), New York (walking), Peru (walking) and finally for some R&R on a tropical island in Belize… We’ve earned it!

The New York nobody knows : walking 6,000 miles in the city / William B. Helmreich.
“As a kid growing up in Manhattan, William Helmreich played a game with his father they called “Last Stop.” They would pick a subway line and ride it to its final destination, and explore the neighborhood there. Decades later, Helmreich teaches university courses about New York, and his love for exploring the city is as strong as ever.
Putting his feet to the test, he decided that the only way to truly understand New York was to walk virtually every block of all five boroughs–an astonishing 6,000 miles. His epic journey lasted four years and took him to every corner of Manhattan, Brooklyn, Queens, the Bronx, and Staten Island. Helmreich spoke with hundreds of New Yorkers from every part of the globe and from every walk of life… Their stories and his are the subject of this captivating and highly original book.” (adapted from Syndetics summary)

Walking the woods and the water : in Patrick Leigh Fermor’s footsteps from the Hook of Holland to the Golden Horn / Nick Hunt.
“In 1933, the eighteen-year-old Patrick Leigh Fermor set out in a pair of hobnailed boots to chance and charm his way across Europe ‘like a tramp, a pilgrim or a wandering scholar’. Aged eighteen, Nick Hunt read A Time of Gifts (Fermor) and dreamed of following in Fermor’s footsteps. In 2011 he began his own ‘great trudge’ – on foot all the way to Istanbul. With only Fermor’s books to guide him, he trekked some 2,500 miles… His aims? to have an old-fashioned adventure. To discover for himself what remained of hospitality, kindness to strangers, freedom, wildness, adventure, the mysterious, the unknown, the deeper currents of myth and story that still flow beneath Europe’s surface.” (adapted from book jacket)

Love Goa : a hand-book for the luxury vagabond / Fiona Caulfield.
“The highly successful Love Travel Guides series is the only luxury travel guide series dedicated to India. Entries are personally sourced from in-the-know locals including chefs and fishermen, artists and architects, writers and taxi drivers, before being personally tested. All information presented made it there under one simple criterion: if it makes you fall in love with the city, it is included in this book; otherwise it’s out. Each book is divided into various sections such as: Musts; Delicious; Fabulous; Gorgeous; Adventurous; Wildly Adventurous; Essential; and Share With Love. Completely hand-made, each guide is lovingly bound using old Indian paper making techniques and covered with khadi, the fabric of India’s independence. Truly unique in its presentation and style, these are beautifully presented guides for the independent-minded traveller with time to spare and money to spend.” (adapted from Syndetics summary) 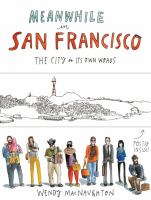 Meanwhile, in San Francisco : the city in its own words / Wendy MacNaughton.
“Take a stroll through the City by the Bay with renowned artist Wendy MacNaughton in this illustrated collection of everyday observations. With her beloved city as a backdrop, a sketchbook in hand, and a natural sense of curiosity, MacNaughton set out to capture locals in their own words. This street-smart collection of intimate explorations is as diverse and beautiful as San Francisco itself, ranging from the vendors at the farmers’ market to people combing the shelves at the public library, from MUNI drivers to the bison of Golden Gate Park, and much more. Meanwhile in San Francisco offers both lifelong residents and those just blowing through with the fog an opportunity to see the city with new eyes.” (Syndetics summary)

Freeways to flip-flops : a family’s year of gutsy living on a tropical island / Sonia Marsh.
“What do you do when life in sunny Southern California starts to seem plastic, materialistic and just plain hellish? for Sonia and Duke Marsh, the answer was to sell their worldly goods and move to an unspoiled, simpler life with their three sons in Belize, Central America, a third-world country without all the comforts and distractions of life in the developed world. Sonia hopes the move will bring her shattered family back together. She feels her sons slipping away from her, and her overworked husband never has time for her or the boys.” (Book jacket)

The valley of heaven and hell: cycling in the shadow of Marie Antoinette / Susie Kelly.
“In three weeks Susie cycles 500 kilometres through a little-documented area of France that is idyllic cycling territory, dining sometimes in luxury and often on weird makeshift meals in her tent. Along the way there are traumas, tantrums, epiphanies, occasional matrimonial disagreements and more than one glass of champagne. Susie and Terry follow the identical route of Marie-Antoinette and Louis XVI when they tried to escape the Revolution, and their journey back to their grisly executions. From Versailles, across Paris and through the Marne valley, Susie wobbles along behind her husband, visiting battlefields of WW1 and the vineyards and cellars of the Champagne region. Tens of thousands of readers have already discovered the joys of accompanying Susie on her past adventures.” (adapted from Syndetics summary) 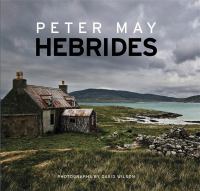 Hebrides / Peter May ; photographs by David Wilson.
“A photographic journey through the Hebridean Islands by the bestselling author of the Lewis trilogy.
The landscape of the Outer Hebrides, with its stark cliffs, ghostly mists and lonely beaches, has become a definitive character of Peter May’s Lewis trilogy. In Hebrides, readers will accompany him on an odyssey in prose and images, through a history of the Vikings’ ‘Long Island’ and his own deep personal connection with the islands that influenced his bestselling work. Travelling as if alongside his protagonist Fin Macleod, he describes the island life – as bewitching as it is treacherous – his encounter with the bird-hunters of Sula Sgeir, the savage seas of Ness and the churches of Eriskay. With extracts from the trilogy and specially commissioned photographs, this book places his writing and characters within the land that gave them form.” (Library catalogue)

Trekking in Peru : 50 best walks and hikes / Hilary Bradt ; updated by Kathy Jarvis and Mark Smith.
“This is the most comprehensive, user-friendly trekking guide to Peru available. Peru’s mountains offer the most varied and dramatic treks in South America with the added attraction of Pre-Columbian ruins along the way. Celebrating 40 years of Bradt, this unique guidebook is based on the Peru section of the very first Bradt guide. All the original treks have been re-walked and new off-the-beaten-track routes added. Ideal for both backpackers and those in an organized group, it describes over 50 mountain treks and day walks with background information and travelers’ tales. Special boxes throughout the text cover topics from guinea pigs to trekking with children.” (Syndetics summary)

The global suitcase : inspiring stories of adventure from 25 interpid travel writers / [compiled by] Mary J Dinan.
“A compilation of interviews with everyday people and well-known personalities who have travelled extraordinary journeys or lived unusual lives, often guided by a cause, in the name of work, or in pursuit of adventure. It also includes interviews with people who have risked their lives for a cause or found a new cause through their travels.” (Syndetics summary)

101 places in Italy : a private grand tour / Francis Russell.
“This personal and wonderfully well informed selection of the most rewarding towns, cities, villages and individual monuments in Italy is the definitive guide for the discerning traveller. As well as comprehensively covering the finest sights in the major tourist destinations… Russell selects, discusses and describes dozens of the less known, and often neglected, masterpieces of art and architecture that are still to be found the length and breadth of the Italian peninsula.” (Book jacket)