Drugs and addictions? Nothing to do with me? Whether we like to admit it or not, aren’t we all addicted in some way, be it to conventional drugs, caffeine or sugar? Food for thought in this month’s health selection. And among other topics, two new books look at the process of aging from very different perspectives.

Marketplace of the marvelous : the strange origins of modern medicine / Erika Janik.
“Despite rampant scientific innovation in nineteenth-century America, traditional medicine still adhered to ancient healing methods, subjecting patients to bleeding, blistering, and induced vomiting and sweating. Facing such horrors, many patients ran with open arms to burgeoning practices that promised new ways to cure their ills. Hydropaths offered cures using “healing waters” and tight wet-sheet wraps. Phineas Parkhurst Quimby experimented with magnets and tried to replace “bad,” diseased thoughts with “good,” healthy thoughts, while Daniel David Palmer reportedly restored a man’s hearing by knocking on his vertebrae. Lorenzo and Lydia Fowler used their fingers to “read” their clients’ heads, claiming that the topography of one’s skull could reveal the intricacies of one’s character. Lydia Pinkham packaged her Vegetable Compound and made a famous family business from the homemade cure-all. And Samuel Thomson, rejecting traditional medicine, introduced a range of herbal remedies for a vast array of woes, supplemented by the curative powers of poetry.” (Abridged from dust jacket)

Blockbuster drugs : the rise and decline of the pharmaceutical industry / Jie Jack Li.
“Li (Laughing Gas, Viagra and Lipitor: The Human Stories Behind the Drugs We Use) surveys Big Pharma’s “golden age” with a nostalgic yet thoughtful history of the science and personalities behind drugs that changed the lives of countless patients while making billions of dollars for the companies that brought them to market. The author examines five classes of blockbusters that gave Big Pharma both esteem and fortunes: from Tagament and Prilosec for peptic ulcers to blockbuster allergy treatments such as Benadryl and Claritin, to blood thinners that refined old-line heparin, to the modern conquest of pain with drugs descended from opium-“one of the first medicines for man.” Li also engagingly relates the tales of the human conflict often involved with discovery, like a precipitous one-year drop in profits that resulted from a feud between an American drug company and one of its Canadian counterparts. Drug discovery is now getting more attention from academia as new products wane, Li notes, but he decries Big Pharma’s “merger mania” and its tarnished reputation, especially following Merck’s abrupt withdrawal of anti-inflammatory Vioxx because it led to increased risk of heart attacks and strokes among those taking it. Nevertheless, Li delights in the “creativity, serendipity and perseverance” of big drug discoveries-lessons he hopes may prompt a renaissance in the industry.” (Publisher Weekly) 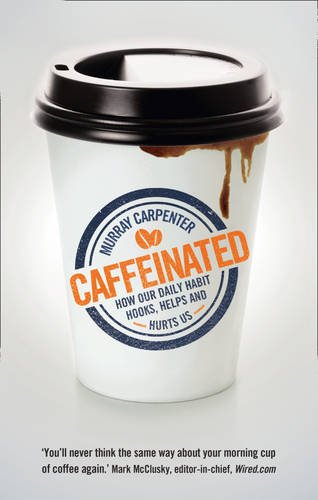 Caffeinated : how our daily habit helps, hooks and hurts us
“Caffeine is a powerful stimulant. It wakes us up, boosts our mood, and offers the potential to improve both our athletic performance and our intellectual prowess. But did you know that caffeine can play a role in health problems such as obesity and anxiety, depending on how it is delivered to the body? Many purveyors of caffeine-based products have ducked regulation for decades – how have they been allowed to get away with this? And are you aware of how caffeine is used to reinforce buying patterns, sharpening our craving for it?
From the coffee farms of Guatemala to the world’s largest synthetic caffeine factory in China, Murray Carpenter draws on the latest research to reveal the little-known truths about this addictive, largely unregulated drug that we consume every day in coffee, energy drinks, teas, colas, chocolate, and even painkillers.” (From amazon.co.uk) 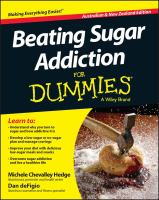 Beating sugar addiction for dummies / by Michele Chevalley Hedge, Dan deFigio.
“A step-by-step guide to kicking the sugar habit and living a healthier, happier life With many Australians and New Zealanders drawing as much as a third of their total caloric intake from sugar and enriched flour, sugar addiction is a rapidly growing problem.” (Syndetics)

The Pilates Healing Bible
“The Pilates Healing Bible is your introduction to the principles of Pilates, bringing together the themes of mindfulness and movement. It includes a range of exercises formulated to work with your busy lifestyle, from routines that can be done at your desk, to floor routines for home, plus a classical Pilates mat routine. Easy to follow instructions are accompanied by step by step images to illustrate each exercise.” (Book cover)

French women don’t get facelifts : the secret of aging with style & attitude / Mireille Guiliano.
“Guiliano (French Women Don’t Get Fat), a former chief executive at LVMH, tackles the topic of aging gracefully in her latest advice book. Quite happy to be in her 60s, the author has “a foot in two countries,” with an American husband, a Manhattan apartment, and a home in Paris. She notes that Frenchwomen (with a life expectancy of 84) have an exceptional attitude toward aging-in France, many believe that old age begins at 80. While the average aging Frenchwoman knows how to be “bien dans sa peau [comfortable in her own skin],” the United States suffers from a “youth-obsessed” and “results-oriented” culture. With her charmingly conversational tone, Guiliano walks readers through the mental and physical steps of aging with attitude, covering everything from cosmetics to spiritual life. Readers will find tips on hairstyles, makeup, healthy recipes, and eating tips, as well as general suggestions for nurturing one’s body as if it were a cherished garden. Guiliano maintains that aging has much more to do with how women think of themselves than with facelifts or outward appearances; nevertheless, dressing stylishly and appropriately, making time for sleep, play, love, laughter, and, of course, the occasional glass of wine are all part of the author’s uplifting attitude fix.” (Publisher Weekly)

A short guide to a long life / David B. Agus ; with Kristin Loberg ; illustrations by Chieun Ko-Bistrong.
“Taking inspiration from Michael Pollan’s Food Rules, cancer specialist Agus distills advice from his previous book (The End of Illness) into a simple set of rules for living wisely through healthy habits. His series of dos and don’ts advocate cultivating a measure of physical self-awareness in order to quickly note any changes in the body, as a means of preventing and detecting disease; consuming unprocessed, whole foods while avoiding artificial vitamins and supplements; and taking medications like statins and low-dose aspirin prophylactically. Agus also covers commonly accepted practices like maintaining a healthy weight, exercising, getting a flu shot, and complying with your doctor’s advice, while not smoking, getting sunburned, or wearing uncomfortable shoes. The book closes with a checklist of checkups needed in each decade of life-another reminder of the self-knowledge needed for disease prevention. Little line drawings and a conversational, fatherly tone make this guide light and easy to follow, if rather facile, and readers who have already taken Agus as a health guru will love it. Those who still need convincing might do better to read his earlier book, which includes references to the actual research behind his recommendations.” (Publisher Weekly)

Do no harm : stories of life, death and brain surgery / Henry Marsh.
If you believe that brain surgery is a precise and exquisite craft, practised by calm and detached surgeons, this griping, brutally honest account will make you think again. With astonishing compassion and candour, one of the country’s leading neurosurgeons reveals the fierce joy of operating, the profoundly moving triumphs, the harrowing disasters, the haunting regrets and the moments of black humour that characterise a brain surgeon’s life. Do No Harm is an unforgettable insight into the countless human dramas that take place in a busy modern hospital. Above all, it is a lesson in the need for hope when faced with life’s most difficult decisions. (Dust jacket)

My age of anxiety : fear, hope, dread and the search for peace of mind / Scott Stossel.
“Stossel, editor of the Atlantic, leads a jittery, searching tour through the most common mental disorder in the world: “a function of biology and philosophy, body and mind, instinct and reason, personality and culture.” As an acutely miserable and anxious 10-year old, Stossel began an early journey through various therapies and medications. His experiences with these treatments doubles as an accidental history of how science, psychotherapy, medicine, and the culture at large have attempted deal with anxiety’s psychological riddle: persistent fear with no “concrete object” of which to be afraid. Stossel’s work features biographical sketches of famous anxiety cases like Charles Darwin and Samuel Johnson, and a rigorous survey of the foundations of anxiety research, from Freud to attachment theory to the “chemical imbalance” model of mental illness, alongside discussions of the biological, neurological, and genetic roots of the condition. Stossel’s journey through his own life is unsparing, darkly funny (a nervous stomach tends to flare up at the worst times, like in front of JFK Jr.), but above all, hopeful. As with many sufferers, Stossel’s quest to find relief is unfinished, but his book relays a masterful understanding of the condition he and millions of others endure.” (Publisher Weekly)