Most of us love a good, gossipy read. So another book by Liz Jones, an English journalist and noted neurotic who has strong opinions on many matters, and a very readable style, is welcome indeed. **Read about Liz Jones here ** She has given us the story of her rather eccentric marriage (Liz Jones’s Diary: How one single girl got married) and her subsequent decampment to a farm in the West Country (The Exmoor files). Now she has favoured us with a full biography. Liz Jones is famous (or, rather, infamous) for her full confessional style and in this book nothing is left out (which can be slightly uncomfotable at times) — but she does have the saving grace of being very funny, try her and see what you think! 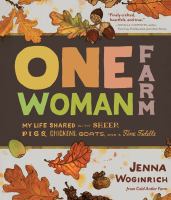 One woman farm : my life shared with sheep, pigs, chickens, goats and a fine fiddle / Jenna Woginrich ; illustrations by Emma Dibben.
“Jenna Woginrich’s inspiring journey from city cubicle to rural homestead has captivated readers of her blog and previous books. Now, in One-Woman Farm, Woginrich shares the joys, sorrows, trials, epiphanies, and blessings she discovers during a year spent farming on her own land, finding deep fulfillment in the practical tasks and timeless rituals of the agricultural life.” (Library catalogue) 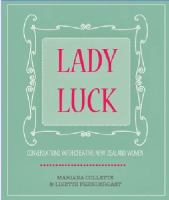 Lady Luck : conversations with creative New Zealand women / by Mariana Collette & Lisette Prendergast ; photography by Susannah Tucker ; illustrations by Connie McDonald ; design by Ceire Hopley.
“I have just reserved this book and I can’t wait for it to come through. It features so much local talent! Highlights for me include blogger Gala Darling, musician Ladi6 and, of course, Wellington fashion designers Love Hotel. Last year we featured an interview with Love Hotel, and I still just adore their pieces – you can take a peek at some of their new goodies here. This lovely new book is full of gorgeous illustrations too; check out the cute drawing of Love Hotel designers Ella and Harriet here!” (This review first appeared on the WCL Teen Blog)

Queen Anne : the politics of passion / Anne Somerset.
“An assessment of the short twelve-year reign of Britain’s last Stuart monarch recounts how she united England and Scotland as a sovereign state, offering additional insight into the military victories that laid the foundations for Britain’s future naval and colonial supremacy.” (Library catalogue)

Girl least likely to : thirty years of fashion, fasting and Fleet Street / Liz Jones.
“Growing up in Essex, the youngest of seven children, Liz Jones was always eccentric. She was convinced her mother would die at any moment, and that her family home was haunted. She would buy paperbacks from jumble sales, change the titles and re-write the endings. She became anorexic, aged 11, after her sister told her how many calories there were in marmalade on toast. Aged eight, Liz vowed she would never have children or do housework. But this isn’t a misery memoir. With deftness and humour, Liz romps through the stories of her past.” (Books In Print)

Report from the interior / Paul Auster.
“Having recalled his life through the story of his physical self in Winter Journal, internationally acclaimed novelist Paul Auster now remembers the experience of his development from within, through the encounters of his interior self with the outer world.” (Library catalogue)

Magical journey : an apprenticeship in contentment / Katrina Kenison.
“A book for every woman whose children have grown up, but who’s not done growing herself, in which the author explores the belief that even as old identities are outgrown, new ones begin to beckon.” (Library catalogue)

The wharf at Waterfall Bay : an isolated life in the Sounds, the courage to change tack / Lisa Harper.
“When Lisa Harper returned to her family’s farm at Waterfall Bay, at the head of remote Mahau Sound, after years overseas working as a scientist, she showed all the pluck and entrepreneurial streak of the earlier generations of women in her family. The isolation wasn’t going to deter her from starting a new business.Eight years later Lisa was an award winning traditional cheesemaker and a Nuffield fellowship winner when she had to make a major decision to wrench the family from Waterfall Bay to secure its future.” (Back cover)

The key is love : my mother’s wisdom, a daughter’s gratitude : essays to move us forward / Marie Osmond with Marcia Wilkie.
“Long-time entertainer Osmond honors her parents’ hard work, discipline, and love in this touching memoir, skirting the conventional celebrity confessional to tell an intimate story of family. Balancing her mother’s wisdom against a personal saga of life on the move, Osmond discusses raising eight children, overcoming a failed marriage, dealing with postpartum depression, and finding oneself after genuine tragedy. This is a picture of a strong woman who leads an active life, and appreciates its real values.” (Publisher Weekly)

Elfrida : the first crowned queen of England / Elizabeth Norton.
“Contrary to popular belief, Anglo-Saxon England had queens, with the tenth century Elfrida being the most powerful and notorious of them all. Wife, mother, murderer, ruler, crowned queen, the life of Queen Elfrida was filled with drama as she rose to become the most powerful women in Anglo-Saxon England.” (Books In Print)

Those wild Wyndhams : three sisters at the heart of power / Claudia Renton.
“Three sisters – beautiful, cultured and aristocratic, born into immense wealth during the reign of Queen Victoria. Their dramatic lives are here unfolded in a rich historical biography certain to appeal to fans of Downton Abbey, ‘Georgiana’ and Stella Tillyard’s ‘Aristocrats’.Mary, Madeline and Pamela – the three Wyndham sisters – were painted by John Singer Sargent in 1899. For The Times it was, quite simply, ‘the greatest picture of modern times’. But these beautiful, fin de siecle gentlewomen came to epitomize a vanished world. The languor of their pose reflects the leisured, gilded, existence of the late Victorian aristocracy that was to be dealt a deathblow by the First World War.” (Summary from www.amazon.co.uk)

Must you go? : my life with Harold Pinter / Antonia Fraser.Must You Go?: My Life with Harold Pinter
“Gradually the guests filtered away. My neighbours offered me a lift up the road. ‘Wait a minute,’ I said. ‘I must just say goodbye to Harold Pinter and tell him I enjoyed the play; I haven’t said hello all evening’. They waited at the door. I went over to where Harold was sitting. ‘Wonderful play, marvellous acting, now I’m off.’ He looked at me with those amazing, extremely bright black eyes. ‘Must you go?’ he said. (8 January 1975).” (Book jacket)

Take a girl like me : life with George / Diana Melly.
“Once there was a girl, pretty and smart and sexy. By her mid-twenties, she’d acquired two husbands and two children, and life wasn’t going to plana Then she met a man. Outrageous, brilliant, impossible, charismatic and kind, he was irresistible. Sex, drugs and jazz were a heady combination for the girl from Essex. Suddenly it was the swinging sixties and she was juggling babies with one hand and popping pills with the other. When George Melly wasn’t in jazz clubs, he was fishing u and not just for fish. Brutally honest, hilariously candid, Diana Melly tells is the extraordinary story of a turbulent marriage, of the uncharted trajectory of a woman’s life from the fifties to the new century.”(Books In Print)

AND TWO GOOD ONES IN ANOTHER PART OF THE LIBRARY :

How to be a heroine : or, what I’ve learned from reading too much / Samantha Ellis.
“This warm, witty memoir is perfect if you’re the kind of woman for whom the Louisa May Alcott quote, “She is too fond of books and it has turned her head” reverberates… At the end of the day, this is a life-affirming feminist text, but one delivered with such dexterity and sly humour that it never feels like a polemic or prescription, making it well worth your time.” (Books In Print)
Note: This book is in the literature collection. Dewey Number 809.93352 ELL

The road to Middlemarch : my life with George Eliot / Rebecca Mead.
“At the age of 17, Rebecca Mead read Middlemarch for the first time, and has read it again every five years since, interpreting and discovering it anew each time. In The Road to Middlemarch she writes passionately about her relationship with this remarkable Victorian novel – loved by so many – and explores how its characters and their stories, along with George Eliot’s own life experiences, can answer some of our fundamental questions about life and love.” (Library catalogue)
Dewey Number 823 ELI

(This book has been received and all free-to-borrow copies are currently reserved or on loan. There are Bestseller ($5/10 days) copies available.)