Reading these stories to your kids will make everyone’s day better! 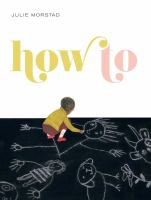 How to / Julie Morstad.
“A treatise on “how-tos,” including how to go fast, how to see the wind, and how to be brave. More imaginative selections include how to wash your face (look up in the rain), how to watch where you’re going (follow the movements of your shadow), and how to wonder (gaze at the night sky). Morstad’s spare text and whimsical fine-line drawings with pastel enhancements portray children encountering new experiences enriched with whimsy and quiet wit. This guide will engage and delight youngsters. Ideal for one-on-one sharing, it will be read again and again” (School Library Journal) 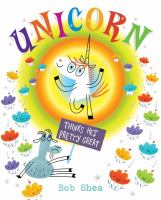 Unicorn thinks he’s pretty great / Bob Shea.
“Rainbows, smiling cupcakes, and flying unicorns in one picture book can be a recipe for a cutesy-wootsy disaster, but not so in this hilarious friendship story. Nothing has gone right for Goat since Unicorn arrived. He seems to best Goat in every way, including making it rain cupcakes. “Dopey Unicorn! Thinks he’s so great!…Look at me! I’m Unicorn! I think I’m so-o-o cool!” the goat cries, in full-on Willems’s Pigeon mode, while sporting a plunger in mockery of Unicorn’s horn. However, when an unlikely scenario involving goat-cheese pizza brings the two together, Goat discovers that Unicorn isn’t so full of himself after all-“Just look at your fantastic horn”; “Eh, it’s just for show. All it’s good for is pointing” -and they become fast friends. Shea’s cartoon illustrations are perfectly suited to expressing the characters’ varied emotions while keeping the story very tongue-in-cheek, with lots of giggle-worthy details. An ideal choice for fans of silliness.” (School Library Journal) 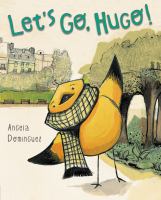 Let’s go, Hugo! / Angela Dominguez.
“An uplifting story about conquering fears and making friends. Hugo, the scarf-sporting avian protagonist, prefers walking to flying. He enjoys his ground-based Parisian life, making art instead of nests. While building a model of the Eiffel Tower, he meets Lulu, who invites him to the real landmark. He distracts her with land-bound activities until nighttime falls and she leaves. Saddened by her departure, Hugo admits his fear of flying to Bernard the owl. The old bird wisely remarks that “everyone is afraid of something,” and teaches Hugo to fly. With more practice and encouragement, he conquers his fears and befriends Lulu.” (School Library Journal) 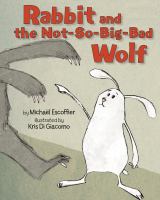 Rabbit and the Not-So-Big-Bad Wolf / by Michaël Escoffier ; illustrated by Kris Di Giacomo.
“Rabbit is asked if he knows the Not-So-Big-Bad Wolf. When he draws a picture for the unseen narrator, he is told that the ears are too big. The same goes for the nose and teeth. With each new description, Rabbit alters his chalk drawing until he hears that the Not-So-Big-Bad Wolf is coming, and that it smells rabbit! Hide, Rabbit! A ball won’t do the trick, and neither will a stack of books. But when the Not-So-Big-Bad Wolf catches Rabbit, it gives him an unexpected, happy surprise. The large, bold, mixed-media illustrations are pleasing to the eye. Di Giacomo’s minimalist depiction of Rabbit is charming, and her raw style is appealing. A satisfying story that children will enjoy and most likely will want to read over and over again.” (School Library Journal) 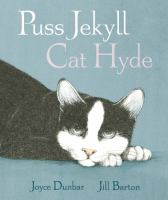 Puss Jekyll, Cat Hyde / Joyce Dunbar ; illustrated by Jill Barton.
“Good puss or bad cat? Jekyll or Hyde? One and the same? Who decides? Puss Jekyll is the soft cuddly cat of the house grooming her fur, but at night she becomes Cat Hyde, hunting mice, all fang and claw. One cat, but two very distinct personalities. Suggested level: junior.” (Library Catalogue)