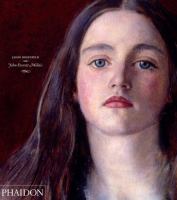 John Everett Millais / Jason Rosenfeld.
“John Everett Millais (1829 – 1896) was one of the most significant English painters of the nineteenth century, successful and respected during his career, honoured as the first painter to be created a baronet, he remains, as recent exhibitions of his work have demonstrated, equally well known today. Whilst his substantial contributions are rarely, if ever, denied, in past art historical accounts of Millais’s long career there has been an unfortunate tendency to superficially distinguish between the early promise of his Pre-Raphaelite masterpieces and the perceived commercial and traditionalist orientation of his later works. In this new study of the artist’s life and work Rosenfeld argues that such readings are far from accurate, demonstrating that the development of Millais’s art was at the forefront of contemporary painting throughout his life. … In Rosenfeld’s words, it is a ‘consistently relevant and inventive Millais’ that emerges in this book” (adapted from amazon.com description) 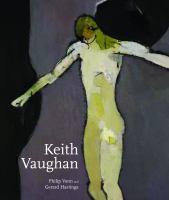 Keith Vaughan / Philip Vann and Gerard Hastings.
Keith Vaughan (1912-77) was a major figure in post-war British art who is known for his searching portraits of the male nude and his association with the Neo-Romantic painters. This book provides for the first time a definitive, illustrated account of his life and work, exploring his wide-ranging achievement as a modern British artist. … A fascinating essay by Gerard Hastings provides a close-up examination of Vaughan’s gouache technique. (adapted from Syndetics summary) 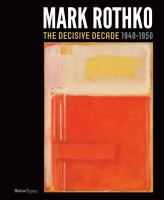 Mark Rothko : the decisive decade, 1940-1950 / Bradford R. Collins, editor ; [essays by] David Anfam … [et al.].
“The first publication dedicated exclusively to Mark Rothko’s art during the critical formative period of the 1940s. Examining the development and artistic exploration of one of the greatest artists of the twentieth century, this unprecedented volume presents the works of American artist Mark Rothko from the 1940s, a time when his most essential development as a painter occurred, dramatically and in a very compact space of time. During this period, Rothko moved from expressive figurative and surrealist canvases to more abstract multiform subjects and finally to his signature abstractions–luminous rectangles of color suspended in space.” (adapted from Syndetics summary) 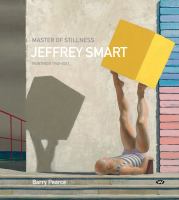 Master of stillness : Jeffrey Smart : paintings 1940-2011 / Barry Pearce.
This book on the work of Jeffrey Smart is the first since his virtual retirement from painting in 2011. It illuminates the vision of the most celebrated of Australian expatriate artists, from his beginnings in Adelaide until his last major composition painted in Italy where he has lived for the last five decades. Adelaide, where Smart was born in 1921, was where his essential evolution as an artist took shape. His early fascination for its grid-like urban landscape was a perfect basis for an ongoing celebration of the phenomena of highways, traffic signs, trucks, transmitters and brutish modular architecture in post-war Europe; aspects of the modern world others found ugly but which he declared beautiful. (adapted from Syndetics summary)

Paul Klee : life and work / text by Christine Hopfengart and Michael Baumgartner ; with contributions by Fabienne Eggelhöfer … [et al.].
“The many books on Paul Klee (1879-1940) published over the years should not obscure the fact that there has been no new, comprehensive Klee overview since Will Grohmann’s much reprinted 1954 monograph. With Paul Klee: Life and Work, the Zentrum Paul Klee has set out to fill this gap, drawing on a wealth of new resources including the Klee family’s archives, much of which is published here for the first time. …The result of many years of research and labor, this magisterial publication demonstrates conclusively why Klee numbers among the most influential and best loved artists of the past 100 years.” (adapted from amazon.com description)

Raphael : a passionate life / Antonio Forcellino ; translated by Lucinda Byatt.
“In this carefully crafted biography of one of the greatest artists of the Italian Renaissance, art historian Forcellino offers a vivid account of the artist’s ambitions and cogent explanations of the personal and political motivations of Raphael’s patrons, many of whom were from the Roman Curia. The author examines the career of Raphael, son of a painter from Urbino, who at 30 painted the papal apartments in the Vatican with scenes that were inspired by church policy; and who created the propagandistic portraits of Julius II and Leo X. Forcellino also endorses the legend of Raphael as a lover, interpreting the sensuality of Raphael’s paintings of beautiful women in light of historical accounts that Raphael died because of his romantic exploits. Nonetheless, despite his early death, Raphael developed a unique style of psychological portraiture and had significant insight into ancient building techniques.” (CHOICE) (adapted from Syndetics summary)